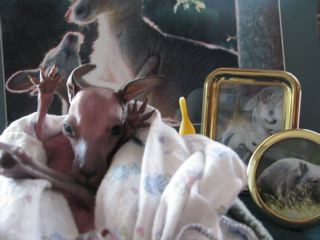 Anne-Marie was leaving for a 5 hour drive. She had travelled about 40k when she saw a dead wallaby by the road. On stopping and checking the animal she found the mother was dead, still warm, and in her pouch a frightened, squirming furless joey (called a 'pinkie'). Luckily the meat ants had not yet found it but were already swarming over the mother's head.

She extracted the joey from the pouch and put it in a little pouch from her rescue kit in the car. Then she tucked the joey inside her shirt to keep it warm, turned around and went back home!

After checking for injuries and working out its age by doing foot, tail and weight measurements, she determined it was four months old - critical information in order to determine the correct amount and type of joey formula. Luckily for this little pinkie another pinkie joey had come into care the day before so the humidicrib was already set at the correct temperature. She put the pinkie in a hanging pouch alongside the other pinkie joey and left them in the care of a very capable and experienced carer who had come in to hold the fort for the weekend. The first pinkie Anne-Marie had named 'April' as it came in at the end of April and she decided to call the second pinkie 'May', since it came on the first day of May.

Anne-Marie resumed her trip, behind in time now. About an hour from home she saw a man hit a peewee and continue driving without stopping. Unfortunately it is not law to stop for a bird as it is to stop for other wildlife that you hit. She pulled over once again and while she was getting ready to retrieve the bird who was now lying on the middle of the road, she noticed 4 peewees fly down to try and help it. Then another car went right over the injured bird. She couldn't believe it. The bird was still alive with its feet up in the air and looking extremely stressed.

She carried it to her car, checked it over, emptied everything out of her rescue basket, lined in with a towel and placed the peewee in there. She didn't have much hope for its survival. She covered the basket with another towel, following the rule for injured animals, warm, dark, quiet. She mentally named the bird June.

About an hour later Anne-Marie pulled off the road and gave the bird some glucose and water dripped onto its beak until it swallowed. It perked up noticeably after that.

Another half hour or so into the journey she stopped to check a dead swamp wallaby, she named July. It was a male and very dead so she pulled it off the road to avoid any eagles or crows getting hit as they cleaned it up. August was a dead bandicoot and September an echidna. She was beginning to wonder how far up the calender she would get before she arrived.

Finally after many stops she arrived at her destination which was a workshop for wildlife carers. She was able to give the peewee to people who were bird specialists. They checked it over thoroughly and found it had amazingly not suffered any fractures. One of the bird carers took it home with her to put it her large aviary for observation. Two days later Anne-Marie checked on its status and the bird received a clean bill of health, and was told it was ready for release so she returned home taking the bird with her. She had carefully noted the place where she had found it and wanted to put it back in the exact same place.

As they approached closer to its natural range the bird really started getting agitated and flapping its wings in the basket. Once back in the right spot Anne-Marie walked with the basket away from the road and opened the lid. The Peewee stood up, look around and without hesitation flew high in the air. It circled twice, then flew across the road to a high tree. Almost instantly its 4 peewee family members flew down from the telephone wire to greet it.

There was much chatter and I imagine the peewee was telling the family about its weekend in Gladstone, free board and lodge in luxury accommodation.

April and May went home with Maureen the carer and are doing well. After just completing 4 months of night feeding Anne-Marie could not contemplate starting all over again and besides Maureen was already in love with April and May who will come back to Anne-Marie's place for release later on. It's always good for kangaroos to have mates to grow up with so they bond with each other and not with the human carer.

What a happy ending! Another day in the life of a wildlife carer.

Ruby is a 20kg wild eastern grey kangaroo that was rescued in the last week of April from a barbed wire fence with myopathy and awful wounds to both legs, feet and toes.