Grassroots climate change action group Rising Tide has blockaded a coal train on its way into the world’s biggest coal export port, at Kooragang Island in Newcastle Harbour. No trains are able to enter Kooragang Coal Terminal because of the blockade. 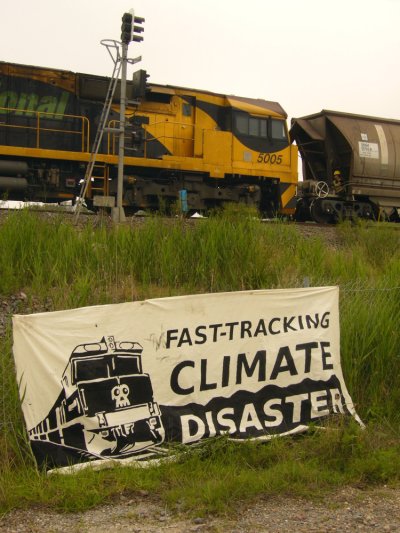 The blockade comes just two days after the United Nations' Intergovernmental Panel on Climate Change (IPCC) released a report warning that the effects of climate change will be worse than previously anticipated, and five days before the Federal Election.

Spokesperson for Rising Tide, Georgina Woods, said, “Our Governments have failed us: both major parties are terminally addicted to coal. The situation is dreadful and we have been forced to take this action because the leadership of this country is morally bankrupt.”

The IPCC reports that two degree Celsius warming of the globe will put about one third of species at risk of extinction. Billions of people are predicted to be at risk of water scarcity.

“There is no longer any room for vacillation: we must act, and that is what we are doing today.”

“When faced with an overwhelming problem and a Government unwilling or unable to take action to solve the problem, it is the duty of all citizens to take action on the community’s behalf.

“There is no way Australia can continue passing the buck on climate change. We are the biggest per capita emitter of greenhouse gases and the biggest coal exporter in the world.

“Hundreds of community members have pledged to take direct-action to prevent the expansion of the coal industry.

“We are taking action today on behalf of our children, and for all those species that will be pushed to the extinction by climate change. It is unconscionable for the Government and the coal industry to continue profiting from accelerating greenhouse gas emissions in this way.”

Make a donation to Rising Tide

This website talks plenty about global warming and the nasty coal miners and governments that support them. But ask yourself this... Did you have a cooked dinner last night? Did you have electric lights to see what you were eating? During the recent winter did you use electric heating, or gas burning heater or wood burning heater? When you drove your car did you fill up with petro-chemicals (Diesel, petrol, LPG)? When you caught public transport did you see them filling up with diesel fuel or if electric then the coal power stations that generate the electricity. For you international warriors, did you catch a plane to the city of your global warming protest? If you want to reduce global warming then make an example yourself.

Not with seawater up to my knees!

Yes, I like to have cooked dinners. I like to have them without seawater up to my knees. I think it's possible... if we try to reduce unnecessarily large carbon dioxide, methane, and other greenhouse gas (GHG) emissions. But business-as-usual won't do this, so people have to protest. I DO agree with you that it begins at home. I try to turn off lights I'm not using, cycle to places whenever possible, use fossil fuelled transport as little as possible (I work at home and so travel very little), grow quite a bit of my own food (saves on petrochemicals and food miles) and so on. The problem is that everyone around me is not doing most of this stuff, so my little bit of foregone emissions does not make a lot of difference. What we really need is for governments to seriously put some effort into reducing GHG emissions, and doing it fairly so that everyone is happy with the system and doesn't feel they are being disadvantaged while others are allowed to cruise around in their gas-guzzling SUVs, and so on. Telling people to make a good example of themselves, and to remember all the benefits we get every day from fossil fuels is a good place to start people thinking about the problem in a personal way, but until the governments really get seriously behind this problem instead of paying it lip-service and then allowing things to go on in a business-as-usual kind of way is going to result in many of us enjoying the equivalent of hot dinners with seawater up to our knees (or necks), don't you think?