"The car was so fantastic as a rescue vehicle and I am feeling saddened that because of someone hating me so much for helping wildlife that they damaged my car, forcing me to park it elsewhere, this has happened. I recently broke my ankle whilst out checking on animals and relied on my car so much. I cannot continue in the short time doing what I love most, helping the Kangaroos." If you would like to help Leisa to buy another car, or maybe in some other way, we include an address for contact and contributions at the end of this article. 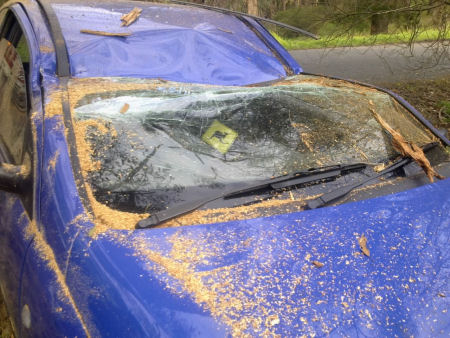 Today Leisa Moore, who looks after the kangaroos in the Adelaide hills, has no wheels. She is still alive, but worries about the kangaroos out there.

On Saturday morning, 2nd June, 2012, Leisa Moore's car was crushed by a tree. 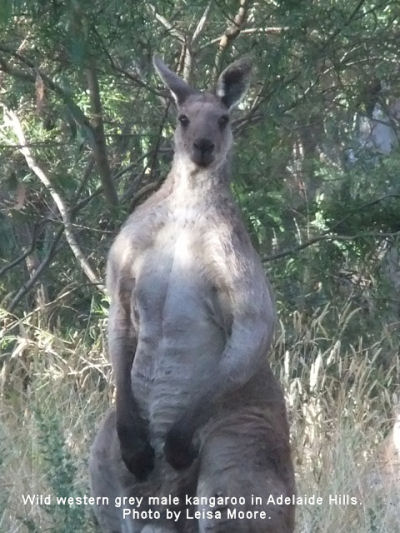 Leisa has been looking after kangaroos for 25 years here. She says that at first it was a fantastic area, but over time mindless hostility towards kangaroos has accompanied population pressure and clearing for development. Kangaroos and kangaroo rescuers are unpopular with people who want to clear land for housing. This has made the kangaroos and her life hell. Although some people appreciate what she does, there is a cowardly group of people who want her to move on and stop helping kangaroos. Leisa is so dedicated - to truth and kangaroos - however, that she refuses to move and continues to go out rescuing in the constantly deteriorating conditions.

This is the lot of so many of Australia's wildlife carers and the public should know. When something goes wrong on top of the general difficulties, it can be very hard to go on. All our wildlife carers need more support and appreciation. Most also need money, but they don't know how to ask for it, even if they had the time.

"I don't know what I am going to do now. I saved so hard to get it and really looked after my car. It was old and I won't be able to get anything as good with what the insurance will pay me as 'market value'. I waited a long time to get a good car as it needs to be reliable in the area I live. I drive in remote areas sometimes to rescue animals. I am already worried about what I cannot do tonight."

Leisa's practice has been to park her car in a particular area near council land and to go on foot to check fences and other hazards where wildlife, especially kangaroos, come to grief. She spends about four hours driving and walking areas each day.

My day starts as soon as it is light to check the roads for injured Kangas and return at dusk after peak hour till dark to make sure there are no Kangas suffering from vehicle collisions. I walk several kilometres checking the vast amount of fencing which is deadly to Kangas of all ages.

During those twenty-five years, but most especially over the past five years, for her troubles, she has been abused, stalked, and had damage done to her car.

In the past few weeks her car tyres have been let down twice whilst she was in the bush checking wildlife.


"Someone stabbed one of the back tyres and did a slow puncture of the other. Before this I found a broken bottle placed under a tyre. Last week I had to buy two new tyres."

Because of the attacks on her car, she accepted when recently a neighbour offered to let her park her car outside his house on the footpath in the same area to make it less obviously a target for the person who had been damaging it. She took up the neighbour's offer on three occasions, most recently Saturday morning.

The Friday evening before Leisa had searched until dark for the mother of a joey she found by itself in the bush. She was unable to find the mother kangaroo and went back home to bed, but she was too worried about the fate of mother and joey to sleep. As soon as it was light she set off to look again for the mother, who she feared was injured and stuck somewhere, unable to attend to her joey. She left her car outside the neighbour's house again, expecting it would be safe.

She says that she got out of the car carrying her 'usual gear' of mobile phone, binoculars, and emergency first aid kit, ready to help any injured animal.

" I had only taken about five steps towards the area I wanted to check, when I heard an amazing noise, one that I know well, the sound of a tree about to crash. I turned and just stared at my car as, with a crash, a huge tree limb thundered down and crushed it. It took all of five seconds. If I had still been getting out of the car, I would almost certainly have been very badly injured or killed."

The SES chain-sawed the limb and removed if from her car, but the tow-truck driver described it as a write-off.


"The car was so fantastic as a rescue vehicle and I am feeling saddened that because of someone hating me so much for helping wildlife that they damaged my car, forcing me to park it elsewhere, this has happened. I would not have parked in this area under the tree were it not for the recent attacks on my car. I have been parking in the other spot for 25 years, where at least no tree fell on my car.

Now, I am sorry to say, there will probably be many people happy that I cannot continue in the short time doing what I love most, helping the Kangaroos. I recently broke my ankle whilst out checking on animals and relied on my car so much. My ankle will take many months to heal apparently as I have done considerable ligament damage but ... I will keep checking and that is that. I just love Kangaroos so much. I will keep going. I am still a bit shaken over the incident."

Leisa is on a low income and uses her own money to help kangaroos in an area where they are persecuted. She could use financial help to buy a decent car and to help with the expense of caring for the kangaroos.

Candobetter.net would like to make it possible to help her through writing this article and telling you about her good work and hard times. If you would like to help, you could send money or contact her at:

If you want to help Leisa, send money or write: