As a residents’ group which deals with planning procedures, Malvern East Group (MEG) finds that VCAT fails its own mission statements of being a low cost, accessible, efficient and independent tribunal delivering high quality dispute resolution. The institution of draconian fees now dramatically highlights this disconnect. 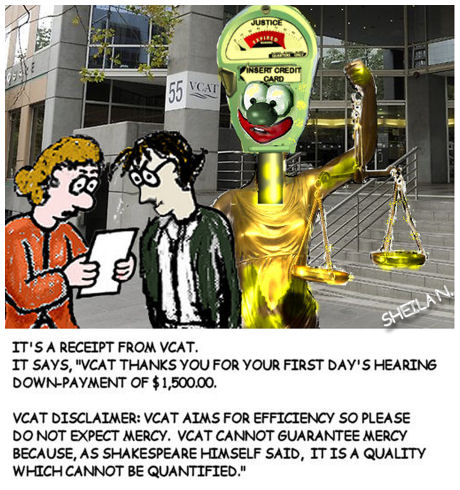 From Malvern East Group to the Regulations Officer, Courts Policy. (See details at end of article)[1]
We quote from VCAT’s website….

As a residents’ group which deals with planning procedures, MEG has taken issue with these statements on a number of occasions…e.g. at the forums conducted by Justices Kevin Bell and Iain Ross, in our submissions re ‘transforming VCAT’ and at meetings with both the Attorney General Robert Clark and Planning Minister Matthew Guy. We have stated repeatedly that most of these aims are rarely, if ever, met.

If the Government allows the proposed fee increases it provides the Victorian community, which it purports to represent, with a final nail in the coffin of justice at VCAT.

The proposed increases constitute a financial barrier for residents and residents’ groups and are yet another barrier for them to negotiate in seeking some degree of fairness in the entire planning situation.

Every single thing in this process is against the residents

Every single thing in this process mitigates against the residents. They cannot match the money of developers nor the specific expertise of planners. They do not have the perceived ‘old boys’ network that seems to operate at VCAT hearings between developers, their ‘hired guns’ and VCAT Members so they are ‘behind the eight ball’ from the very beginning of an appeal because they can never match the expensive representation developers use as a matter of course. Local Policy on which residents tend to rely is swatted away by Tribunal Members who pay rapt attention to expert (so-called) witnesses who are PAID to give unsworn evidence which favours their employers. Why else would they be there?

At the core of the cost of administering VCAT is the endless games played by developers…e.g. the ambit claims, the amended plans, the employment of so many “hired guns” who take up endless amounts of time with statements that inevitably marvel at the sheer wonder of the plans before the Tribunal and the repeat applications and, inevitably, appeals for MORE than they got in the first decision. The money developers are allowed to spend in the “people’s” court is the major factor in making the entire planning appeals procedure so lengthy and expensive.

Legal representation needs to be downsized and equalised

The process we would like to see in planning disputes is that each party to the appeal either self-represents or employs one person only to persuade the Member that theirs is the point of view that complies with the objectives and standards of applicable Planning Schemes. Cases would be shorter, cheaper and justice would not only be done but it would be seen to be done in such a level playing field if this were to happen.

We have long despaired of VCAT ever introducing a system of independent expert witnesses and we now despair of VCAT ever providing ‘low cost’ dispute resolution if the proposed massive fee increases are allowed. Residents will be priced out of the planning dispute process. In most cases they are already ‘out-moneyed’ by applicants. With the suggested fee increases they won’t even be there. Residents’ perception of VCAT’s proposed fee increases is that it is a somewhat devious way of cutting down the waiting times for appeals to be heard.

We urge the Government to “fix” the Planning Appeals section of VCAT in the ways we have repeatedly suggested and not allow the proposed fee increases.

[1]The above submission was from the: