Please look at what is happening under the Environmental and Protection laws that allow this to occur right now. In the article there is a link to a survey in NSW Upper House about Environmental Protection Authority performance. The Glenbog State Forest, NSW is home to many threatened species of flora and fauna, and logging began in June 2014. It is a state forest and logging was thus expected. However logging is being conducted in a reckless manner with regard to the important faunal presence there. The forest covers an area of about around 11,000 hectares and is located in the southeast of Australia in New South Wales, with the closest townships being Bemoka and Nimmitabel.

You can see the extent of environmental damage caused by these careless logging operations, and how native fauna are not being considered and provided the protection they deserve, despite the Environmental Protection Acts in place! Logging is deliberately ignoring the marked burrow systems in areas of high bare-nosed wombat population such as Glenbog State Forest. 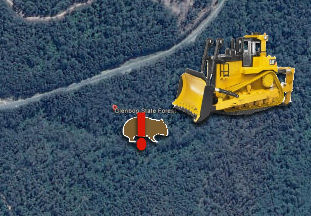 In June 2014 logging of the Glenbog State Forest began. Glenbog is home to many threatened species of flora and fauna. The conduct of logging in this forest has given rise to deep concerns for animals. Although local people have marked burrows, the loggers appear to have ignored this information, repeatedly destroying, blocking and crushing well-marked burrows. A Glenbog blog has been set up to record what is happening and to try to find others who may help local wildlife carers - Marie and Ray Wynan - who have been working single-handed to save the many animals affected by indiscriminate logging here. Most of this article is sourced from material on the blog in an effort to make what is happening more widely known.

The Environment Protection Authority (EPA) is responsible for regulating native forestry operations on public (Crown) land. The Forestry Corporation of New South Wales is the company carrying out logging in Glenbog.

Marie and Ray Wynan – who are wildlife rehabilitators – own a property that adjoins the state forest. Their property is a part of the Wildlife Land Trust and also has a National Parks and Wildlife Conservation Agreement that protects threatened flora and fauna. They are trying to improve the treatment of the animals in the forest and have shared information about the logging activity and the impacts to Australian native animals, including many threatened species.

An example of the carelessness of the loggers

On July 27, 2014, observers wrote, "Burrow number 351 that last week was spared by 10 meters from the machinery was today found destroyed/blocked and backfilled – totally unnecessary.

The burrow was well marked and had fresh wombat foot prints in the snow leading into the burrow just a few days ago.

Ray managed to dig through and open the entrance but we can’t confirm the fate of the wombat. …….AND…….
under all this carnage is burrow number 395 that also was very well marked.  Entrance blocked with pushed up (with dozer) fallen trees, branches, earth. 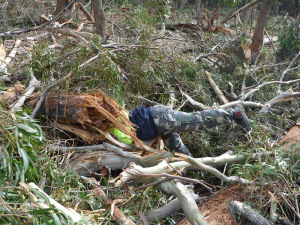 Again, Ray managed to climb over and back down to clear away enough to open the entrance, (very tough going to say the least!)
At last visit at this burrow before the logging, we saw a healthy wombat living in this burrow." Can you imagine how the wombats trying to live here must feel! It would be like living on the Gaza strip.

The NSW Upper House has launched an enquiry into the performance of EPA.

Please complete this online survey and tell the Upper House why you are unhappy with how the EPA has handled the Glenbog State Forest regarding the protection of wombats.

Click on the link below to be redirected to the survey.

Some of the wildlife of Glenbog include:

Forestry operations are permitted in most State Forests under NSW Forest Agreements and integrated forestry operation approvals (IFOAs). These provide long-term arrangements for the conservation and sustainable management of Australia’s native forests, consistent with the National Forest Policy Statement.

Glenbog is a State Forest, so unfortunately it was always intended to be logged. However, with such a high number of threatened species within the forest and the fact that the area has a large population of wombats, it is believed that Forestry Corporation of NSW needs to be thoroughly open and transparent, more environmentally aware and fully accountable for their actions in relation to wildlife harm.

THE heat and severity of Kinglake and Marysville fires that killed 159 people on Black Saturday was significantly increased by clear-fell logging of forests, scientists believe. In a landmark two-year study of Victorian fires, scientists from Melbourne University and the ANU examined satellite images of hundreds of thousands of trees burnt on Black Saturday. The scientists say the study showed conclusively that logging in the decades prior to Black Saturday made the deadly blaze much more ­extreme. Professor David Lindenmayer, Australia’s leading scientist of forest ecology, who headed the study said it showed conclusively that clear fell logging increased the danger from bushfire. HS: Study finds logging increased intensity of Black Saturday fires Rather than limit logging, the Victorian government intends to fight the fires through more fires, contrary to logic and good stewardship of our environment. Following the disastrous Black Saturday wildfires, the Victorian Government established a policy to burn 5% of all public land each year despite any fires naturally caused by lightning or other means. Sadly, most of the burning occurs in national parks and wilderness areas (where no one lives), simply to reach their ‘target’ of burning nearly 400,000 hectares annually. Please sign the petition:End deadly prescribed burns in Victoria and the carnage to native animals