Veterans Today: Responsibility for boy's death rests entirely with the United States and its Allies

The death of a child and the blood on Washington's hands 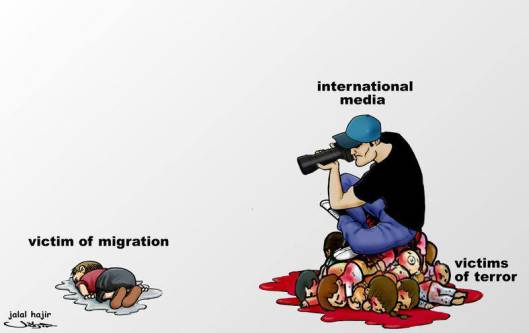 All Americans need to take a good close look at the photo below. This is the result of the Obama administration's attempts to overthrow the government in Syria. It probably was not the intended result, per se, but it is the result nonetheless.

When you finance an army of crazed murderers and send them into a country to deliberately sow chaos and instability, people are naturally going to try and seek safety.

If the chaos persists over a period of years with no end in sight, you will inevitably have a flood of refugees pouring out of the country.

This article by Richard Edmondson has previously been published (3/9/15) on Veterans Today and adapted (5/9/15) for the Syrian Free Press. 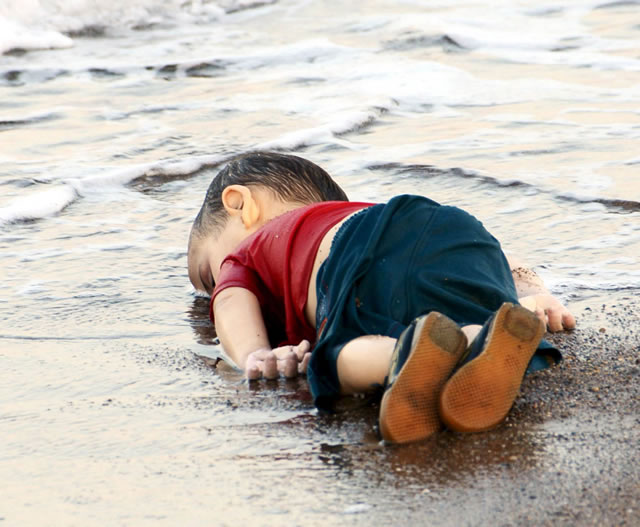 Washed ashore on a Turkish beach

This is the problem Europe is confronting now – and they brought it all on themselves by supporting America's regime-change policies in Syria and Libya. Both countries were prosperous and had stable governments prior to the US interference.

The boy in the photo above, whose body washed up on a Turkish beach Wednesday, has been identified as three-year-old Aylan Kurdi, from the Syrian town of Kobani. His mother as well as his five-year-old brother, Galip, also drowned. Kobani is located near the Turkish border. The family were able to make it over that border and into Turkey, along with many other Syrians, in a stream of refugees that began when ISIS launched its siege on Kobani.

This summer tens of thousands of Syrian refugees have been making their way to Turkey's Aegean coast in particular, this in an effort to gain passage to Greece. According to some estimates, the number departing by boat has averaged about 2,000 per day over the past month.

From the coast of Bodrum, in Turkey, to Kos, one of the eastern-most Greek islands, is only a distance of two miles, and some have been trying to make the trip in rubber dinghies. Early Wednesday, 23 people, including Aylan and his family, crowded into two small boats and set out for Kos from Akyarlar area of the Bodrum peninsula. Both of the vessels capsized in route to the island.

You can go here to watch a video of Aylan's body being found on the beach. The video also shows the body of a woman being pulled from the waves.

Syria is a country with a democratically elected government. In the presidential election, held in June of last year, Bashar Assad emerged with 88.7 percent of the vote. As I commented at the time:

Recently Russian Foreign Minister Sergei Lavrov referred to Assad as the "legitimate leader" of Syria. He is correct. He is.

But that makes no difference to the US. The US persists in its regime-change operation in Syria, training so-called "moderate" rebels, a group of misfits and degenerates whose thinking and ideology in reality differ very little from ISIS.

Obama and the mainstream media don't credit the American people with a lot of intelligence. They obviously think you're insufficiently bright to put two and two together and figure out that the moderate citizens of Syria, i.e. they who adhere to the principles of religious tolerance, support their government, and that it's the crazies who in reality are enjoying the backing and support of NATO and its allies.

The death of this child is a tragedy. But of course Aylan is only one boy.

Nearly a quarter of a million Syrians, according to some estimates, have died since the outbreak of the conflict in 2011. I'm going to say something that will sound startling and extreme to some, but the blood of every single one of these people is on the hands of the Obama administration, and particularly its policy makers in the State Department, as well as certain US allies.

Anyone and everyone who has provided weapons, training, or any other type of support...to Al Nusra, ISIS or any of the other armed gangs terrorizing Syria and driving people from their homes...bears a share of the responsibility.

Aylan's death, largely thanks to the photo above, has captured the attention of the mainstream media, but of course the media have refused to assign the blame where it belongs.

In fact the media, if anything, will likely spin the boy's death to justify further intervention in Syria. And this too is part of the problem.

By cheering on these conflicts, and demonizing certain leaders of certain countries who do not support Israel's occupation of the Palestinians, the media, too, are a major part of the problem.

So where is all this headed? Latest reports are that Russia has entered the fighting in Syria, although the claim has been officially denied by Russia. Either way, it's hard to see this coming to a peaceful resolution anytime soon. Meanwhile the killing will continue and the refugee problem will not abate, but do not expect this to bother the conscience of the war planners in Washington. In the halls of the State Department, no such thing as a conscience even exists.

The child's family were living safely in Turkey, and had to pass through safe countries to get there. They had been in Turkey for 3 years, and they had never been in a war zone. The place where they did live has since seen violence, from ISIS, but was safe in their time. The father did not go on the boat, but put his family on, without life jackets. They wanted to go to Canada, but there was no formal application. The father wanted to have his teeth fixed, by the welfare system. The photo has been used by the media to symbolize the plight of asylum seekers, and how the West should do the right thing and take more refugees! It's backfired, by revealing that not all those flocking to Europe are escaping "persecution and terror"! However, it's assumed that the war and the de-stablization of Iraq and Syria are inevitable, and unavoidable. The UN is admitting defeat and derelict of duty. They should be UNITING NATIONS against intervention by first world nations, their de-stablization and illegal wars. How many world leaders are actually trying to address what's causing the mass exodus from Syria, and trying to end what's causing it? How many are condemning the US war machine for the tragic loss of countries and lives? The tragic image of the small, drowned child is being used to promote guilt in the West, and encourage Europe and Australia to take in more asylum seekers from Syria, and other countries in conflict, but this is not the way! The truth must be known, that not all those entering are fleeing terror, and that we must not continue bombing the sovereign nation of Syria, but work with them to end this conflict.