In solidarity with Syria, Australian boxing team conducts exercises for a set of matches in Fayha'a Sports City

The following article, together with an embedded 1:36 minute video, was previously published on the English language edition of the Syrian Arab News Agency (SANA) on 14 May. See also: Australian boxers fighting for peace in Syria (26/5/16) | SBS and other republished SANA articles: Australian sport delegation concludes visit to Lattakia (19/5/16) and Australian boxing team conducts friendly matches with Syrian national team (14/15/16). 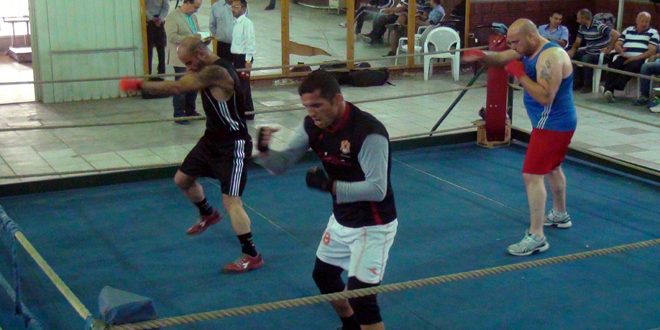 The Australian Boxing Team visiting Syria in solidarity with its fight against terrorism conducted yesterday a series of exercises preparing for a set of matches today in Fayhaa Sports City.

Rev. David Smith, head of the Australian delegation, a boxer and a cleric, said in a statement to SANA:" We want to draw the attention of the world to the fact that Syria is alive, and there are still life and joy and sports here, not just death and destruction; which is always the message broadcasted on television. We are doing that through sport because we want to play with our friends here and build more relations with Australian and Syrian people, and we want to show the whole world the real Syria and the real Syrian people" 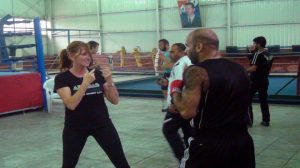 Smith pointed out that this is his fifth visit to Syria in the last four years, and that he is working on building relations between the Syrian and Australian people.

"We would love to see more cooperation between Syria and Australia in every level but certainly in sports, and the Syrian players are very good and strong, and can win any team in the world." Smith added.

For his part, the honorary consul of Syria in Australia Maher Dabbagh said that the Australian team includes distinguished boxers who have a heroic history in Australia, indicating that the team's visit has a significant impact on reflecting the reality of what is happening in Syria in its fight against terrorism. 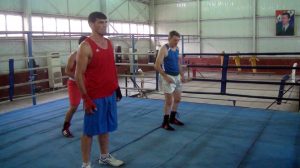 Head of Syrian Boxing Federation Issa Nassar, highlighted that the Australian team's visit to Syria includes an array of games with the national team in Damascus as well as in Latakia.

The Australian Boxing Team is visiting Syria for the second time under the slogan "Boxers for Peace", joined by a media team to document the visit and sports activities, and other tourist activities to show the real image of Syria in the Australian media.