Prior to the war Syria hosted millions of refugees from other US-NATO interventions in the region, especially from Iraq. There is also a huge population of Palestinians in Syria since the creation of Israel. More came from the surrounding countries during subsequent displacements. In 2016 UNRWA-registered Palestinians in Syria numbered 560,000 according to the United Nations of which 450,000 remained in Syria. They have their own special status there, receiving free housing, education and health-care like Syrians. All these refugees, who are entirely the result of continuous foreign interference in this region since before the first world war, with many changes of borders and renaming of countries there, have been placed in danger, along with the Syrian-born population, by the US-NATO attempts to dismantle the government by supporting so-called 'rebels' in the pretence that these 'takfiri' (fundamentalists) are fighting for 'democracy'. 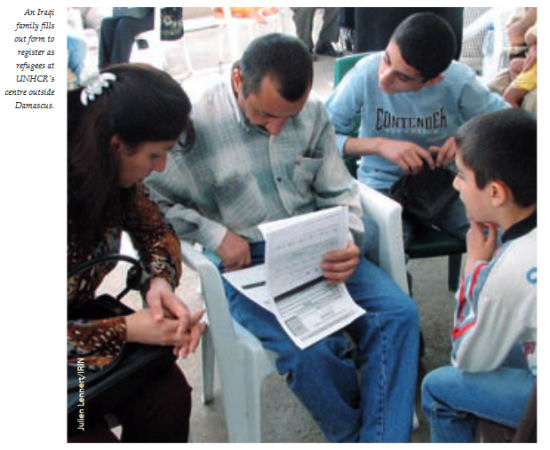 People should question the idea that Syrian refugees are running from the Syrian government. No, the majority of Syrians have run to the Syrian government, which currently provides the only safe havens for displaced persons inside the country. It conducts battles and negotiations to liberate people from towns and areas which have been taken over by terrorists. See, for instance, "Good News! Reconciliation, peace and return home of Syrian refugees in two Syrian locations due to Syrian Government efforts" Those parts of Syria that are beyond the control of the Syrian government and army are not safe. They are controlled by foreign-funded fundamentalist forces, such as Isis and Zinki, many of whom are not Syrian. These are the places where the atrocities we hear about that are committed in the name of religion occur. The Syrian Army does not commit religious atrocities. A major tactic of the fundamentalist religious 'rebels' is to capture local populations, live among them, and use them as human shields, refusing to let them flee when the Syrian Arab Army tries to kill the terrorists. The army does conduct aerial bombardments against the terrorists and in these situations where populations are held hostage by the terrorists, civilians do get killed. The reason that the army has to bomb the terrorists is because otherwise they will take over Syria. Reports of the use of poisonous gas have failed to be substantiated. See "Syrian President al-Assad interviewed by CBS News", and other investigations have led to evidence that the terrorists used poisonous gas, notably sarin gas supplied by Turkey, in an attempt to frame the Syrian government. See Hersh Vindicated? Turkish Whistleblowers Corroborate Story on False Flag Sarin Attack in Syria - Article by Peter Lee. Hilary Clinton, when she was US foreign secretary, was gung-ho for the US to invade Syria on the pretext that the Syrian government was using poison gas against its population. Sergei Lavrov, the Russian minister for foreign affairs, was able to get the Syrian government to get rid of all its chemical weapons (which had been supplied by the US, by the way), thus removing the US pretext for invasion. (See "
Review: Hillary Clinton's Hard Choices - the Syria chapter" We also have a report from a resident of Aleppo describing how ISIS had gained control of the chlorine factory in Aleppo.

Refugees in Syria and the Syrian Government

The following article is republished from Iraqi refugees in Syria, Forced Migration Review. Many, probably most of these refugees are still in Syria. Refugee advocates should consider this when they advocate support for the so-called 'rebels' and encourage war. These refugees are the product of US-NATO invasions of Iraq on the dishonest pretext of 'weapons of mass-destruction'. It is astonishing that people continue to trust the mass media and the US-NATO alliances that have produced almost total destruction of Libya, the mass exodus from Iraq described below,which is now being repeated in the war on Syria.

Prior to the war Syria hosted millions of refugees from other US-NATO interventions in the region, especially from Iraq. There is also a huge population of Palestinians in Syria since the creation of Israel. More came from the surrounding countries during subsequent displacement. In 2016 UNRWA-registered Palestinians in Syria numbered 560,000 according to the United Nations of which 450,000 remained in Syria. They have their own special status there, receiving free housing, education and health-care like Syrians. See Yamouk and the Palestinians in Syria - Article by Mo Salhi All these refugees, who are entirely the result of foreign interference in this region since before the first world war, with many changes of borders and renaming of countries there, have been placed in danger along with the Syrian-born population. "At the start of 2007 UNHCR estimated that the number of Iraqi refugees in Syria exceeded 1.2 million, a huge influx to a country with a population of. 18 million." (Source: Iraqi refugees in Syria, Forced Migration Review:

"Syria has offered Iraqi refugees care and assistance, and continues to do so, in spite of the limited nature of its material resources. At the start ofUNHCRestimatedthat the number of Iraqi refugees in Syria exceeded 1.2 million, a huge influx to a country with a population of million. This heavy number of arrivals hashad anextreme effecton all facets of life in Syria, particularly on the services which the state offers to citizens. There has been a sharp increase in the cost of livingandthe unexpected weightof numbers has had dramatic impacts on the infrastructure and the economy.

The sudden increase in the population has led to a rise in costs in all areas of life. The prices of foodstuffs and basic goods have gone up by 30%, property prices by 40%and rentals by 150%.

Water consumption has increased by 21%. The additional cost to the Syrian government of supplying Iraqi refugees with drinking water and sanitation alone came to$6.millionlast year. There are so many Iraqi refugees that they have become a burden on the labour market. In Syria’s unemployment rate was 18%.

The human health needs of the Iraqi arrivals are mounting, in particular among women, children and the elderly. The Syrian government is endeavouring, with whatresourcesithas, to meet their needs, including carrying out necessary surgical operations, health care interventions, vaccinations against epidemics andchildhoodimmunisations.

It should be noted that health services and medical care are free of charge in all government hospitals and public clinics.

This has led to a health care crisis and shortage of hospital beds. Teaching hospitals alone estimate the costs of treating Iraqi refugees in 2006 at approximately$163,000.The Syrian Red Crescent spent some $60,000 on providing treatment and surgery to around 730 Iraqis in 2006. There is a pressing need to equip two 200- bed hospitals and to set up clinics to supply the 1.2 million Iraqis with the necessary medicines and equipment.

Basic education in Syria is free and the cost of higher education is usually nominal. As a result there has been a steady rise in enrolment, leading to schoolandclassroomovercrowding which has adverse repercussions on equality of access to learning and education and on the health of students and teachers. Inability toabsorbmorepupils is likely to lead to a rise in school drop-out rates.

Accordingly there is a pressing need to enlarge the existing schools and build about 100 more schools, so that all these students can be assimilated in ordertopreventinstances of drop-out. The total cost is estimated at approximately $60 million.

According to UNHCR, the number of Iraqi refugee families in Syria without a breadwinner is estimated to be around 27%. The situation of female-headed households is grave.
The war in Iraq has resulted in new circumstances never previously common in Syria or Iraq. Conditions have forced some families to work in prostitution or toencouragetheir daughters to work in this field – something offensive to the customs of both Syrians and Iraqis.

Harsh living conditions have also led to the spread of child labour and increased drop-out rates. There is an insufficient provision of cultural and recreationalcentres,nursery schools and playgrounds. There is also an urgent need to provide appropriate care for the elderly and for the very large number of new arrivalswithdisabilities, more than a third of which are attributable to war injuries. There is a pressing need to support these disadvantaged families, and to create homesto carefor the victims of war and displacement, the elderly and children, particularly orphans and people with disabilities.

They need physical, mental and social support to prepare them for return to their original communities once the war has ended and conditions are stabilised.

Overcrowding and the reduced standard of living have brought about a rise in crime of more than 20% in areas with concentrations of Iraqi refugees. We are witnessing kindsof crimes previously unknown in either Iraq or Syria – kidnapping, ransom demands and blackmail, as well as the involvement of organised crime in prostitution, killingsand intimidation. In 2006 the Syrian police and security authorities thus had to spend an additional $15 million on maintaining law and order.

Conclusion Iraqi refugees constitute a numerically enormous mass of humanity in comparison to the number of the inhabitants of the region. Certain agencies estimate thatthe number of refugees in states neighbouring Iraq is greater than the total number of refugees in all the countries of the European Union. Syria’s economy and infrastructureare buckling under the great weight of the burden.

The relief and aid which Syria has offered to Iraqi refugees in its territory over the past two years (2005-06) alone has amounted to $162 million. In light of the continuing rise in incoming Iraqi refugee numbers, it is estimated that the cost of humanitarian, health and education support for Iraqi refugees over the next two years will exceed $256 million.

It is necessary, in our view, that the international community acknowledge the need to find political solutions to the crisis in Iraq the tragic reality that more than four million Iraqis have been displaced and strengthen the international relief effort required to meet the crisis the burdens thrust on neighbouring states the risk that any further deterioration in the situation will lead to even greater number of displaced people with implications for the entire region the urgent need to provide financial support to cover the cost of providing services to Iraqi refugees in Syria and also to build the capacities of governmental and non-governmental organisations such as the Syrian Red Crescent the need to provide necessary financing for UNHCR and other humanitarian agencies working to help migrants and refugees in the neighbouring countries the importance of offering assistance and funding to support the right of Iraqi refugees and migrants to return to their homes and creating appropriate circumstances for them to do so.

The Iraqi authorities and the foreign troops present on Iraqi territory must urgently shoulder responsibilities placed on them under international law to ensure protection, security and services to all residents of Iraq, including those groups that are weakest and most exposed to danger and persecution, such as the Palestinian refugees. "

The writer of the report, Dr Faisal al-Miqdad, is Syria’s Deputy Foreign Minister.

Breaking through the censors on BBC Radio 4 on Syria

Fantastic discussion despite the panel: http://www.bbc.co.uk/programmes/b07w5ydx