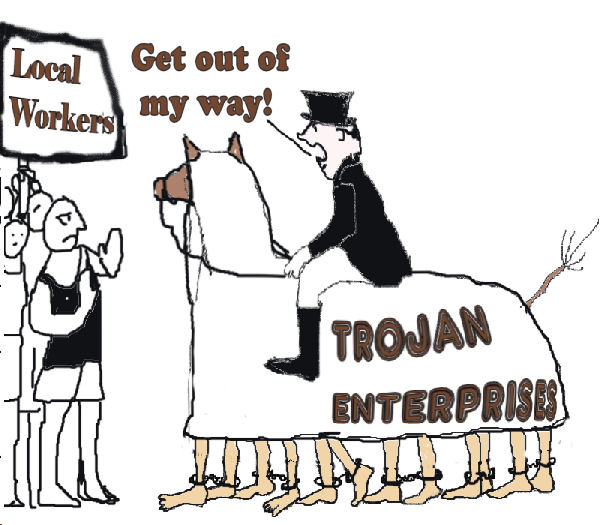 In the article "Bring in the Chinese", of 14 May in The Australian newspaper Robert Leeson proposed what would effectively be an apartheid system involving imported chinese labourers. These workers are said to be needed to build necessary additional infrastructure. This infrastructure would enable Australia to help China further pollute its environment and fuel global warming with our mineral exports.

This article is yet another addition to the almost deafening crescendo preaching the necessity of yet more immigrant labour.

Chinese companies are expected to soon be awarded contracts to build some of the planned infrastructure, but to do this, Leeson argues, they will need to import Chinese labor as happened with the Tanzania-Zambia Railway, which was built by Chinese capital and labour.

If this is not done, he implies, an economic opportunity for Australia will be lost.

Leeson proposes a number of conditions to be met which he would have us believe answer all possible objections to the scheme:

What Leeson is proposing effectively amounts to an apartheid system in the same way that 'immigrant' black workers from bantustans within South Africa once provided cheap labour for South Africa's mines and factories. However, if Leeson's plan fails, then it is not hard to imagine how this could lead to an effective invasion of parts of Australia. In the event of any future conflict with China, having such large numbers of foreign citizens on our own soil, would well pose a serious threat to our national security. An alarming statistic provided by this article, is that there are currently 150 million internal migrants in China, enough to overwhelm the current Australian population many times over. (Of course, because we are mostly Europeans and not Tibetans, drawing attention to this fact practically guarantees that this country's opinion-moulders will dismiss objections to Leeson's scheme as coming from an old troglodyte "yellow peril" school of thought.)

Solutions to the claimed labour shortage problem, other than that proposed by Leeson, could include:

However we eventually solve Australia's supposed economic difficulties, a calm discussion, in which all possible options are rationally considered taking into account all the environmental, social, economic and geo-political factors, will first be necessary.