Perth, West Australia: A delegation of community leaders will deliver over 25,000 messages calling for the South West forests to be protected at Dumas House tomorrow. The event is the, "Voices for the Forests - Grand Postcard Handover," Wednesday, 10th March, 12 noon, Dumas House, 2 Havelock St, West Perth. Professor Fiona Stanley, will be joined by climate scientist and IPCC lead author, Dr Bill Hare, acclaimed actor, Kelton Pell, and a number of other well-known and influential West Australians at the event.

"Stopping logging is something we can do immediately to improve climate change and environmental degradation," said Prof Stanley. "Continued logging and clearing of such carbon-dense and biodiverse forests really is a ludicrous situation which can be stopped immediately, and it has to be. 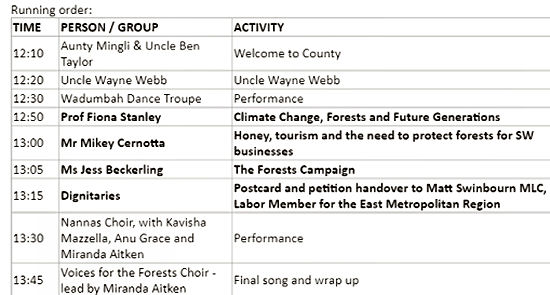 "With Australia holding the world record for mammal extinctions; the woodlands in WA’s South West recently being announced as 1 of 19 collapsing ecosystems in Australia, and more than 50% of the rainfall decline in the South West being a result of land-clearing, Prof Stanley is spot on: it is ludicrous what we are doing in the forests down South.

"It's never been more urgent, or more immediately achievable that we protect what's left of our precious karri and jarrah forests for climate and biodiversity,"

"West Australians overwhelmingly support the full protection of the South West forests. Recent polling shows that 78% of people in the State agree that all native forests should be protected and over the past few months we have had a huge response from people across the community.