Today Victorian activist groups working together stopped legislation which could have defined any local councillor who may have previously actively opposed a particular development proposal as an 'interested party' and hence ineligible to vote. Demonstrators wore tape over their mouths on the steps of Victoria's Parliament.

See also: "Backdown on activist councillors", in The Age of 27 Oct 08, "Govt backflip on council conflict of interest legislation" on ABC on 29 Oct 08.

The photo above shows a crowd of very concerned Victorian citizens, with their mouths taped shut. They were demonstrating on the steps of Victoria's parliament today against proposed laws to gag local government councillors. The laws would have discouraged activists from running for local parliament and incumbent and prospective councillors from engaging with the community.

The protest meeting was organised by unChain St Kilda in association with the Greens, Protectors of Public Land, Planning Backlash and various other community groups.

Correspondence between groups also indicated that activists wished to exploit the publicity these undemocratic laws had attracted in the mainstream press, using the opportunity to signal their increasing concerns about laws negatively affecting democracy, development and the environment in Victoria.
The black tape across their mouths may only be the first of graphic or theatrical demonstrations to get across to the public that governance in Victoria is in serious trouble.

Women activists prominent in defending democracy against developers in Victoria 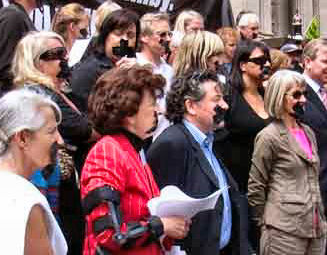 These photographs and others of similar protests on the same steps in the past few years show that women are playing a major part in Victorian politics today, although not necessarily in the mainstream. We see the women outside, defending democracy, because, unfortunately, the people inside - mostly men - seem more inclined to promote corporate agendas over citizens' rights. Vaguely reminiscent of Suffragette and Temperance movements, because of their predominantly female component, protests against development take long-term stamina in the face of apparently irresistible commercially-backed trends which have most of our elected representatives spellbound or hog-tied. One woman can be seen here wearing braces on her arm. This is Mary Drost, who, remarkably, was not stopped from coming despite two broken arms. Julianne Bell, of Protectors of Public Land, is another extraordinary human being who has succeeded in uniting groups from all over the [ever more] sprawling city of Melbourne.

Despite this gender-trend, Victoria also has some wonderful male activists. Two men who played strong roles in the protests today were Serge Thomann of unChain Saint Kilda and Greg Barber, Greens MLC.

"Unchain St Kilda" is the product of a movement which, in the absence of useful formal process, rose in disgust against unnecessary and unwanted intense commercial development proposed for a triangle of land overlooking the promenade in the beach suburb of Saint Kilda, widely perceived as the last straw in a series of council-facilitated unrepresentative attacks on residential ammenity in that suburb. (Saint Kilda has also been the site of a series of despicable Port Phillip Council-led attacks on wild-life in the local Catani Gardens - See video investigation). Unchain St Kilda is "an incorporated association, no A00051216V. Its members are a coalition of people, from all walks of life, who live, work and visit St Kilda, brought together by our outrage at the size and focus of the proposed commercial development on the St Kilda Triangle Crown land."

The proposed law would have automatically disqualified many of the members of Unchain St Kilda from voting on the issue if they win the next Port Philip Council election. Apparently they have enough committed members to replace the entire council at the next local elections. The timing of the proposed new law and the decision by Unchain St Kilda members to run for council seemed a particularly unhappy coincidence.

The movement's "Save St Kilda" campaign has three objectives:

"Attack on local democracy - stopped in its tracks!" -- Greg Barber

Greg Barber, Member of Parliament for the Greens, first alerted many of us to the Bill which was proposing to muzzle activists in council. Tonight in an email headed, "Attack on local democracy - stopped in its tracks!" he wrote,

"Just a few minutes ago, tonite, parliament successfully amended the government's bill, to remove the offending clause from the Local Government Amendment (Councillor Conduct and Other Matters) Bill 2008.

All non government parties voted for the amendment, which completely removes 78D part (b)

Many thanks for all your help and congratulations on your campaign. Amazing what can be done when parliamentarians and the people work hand in hand." 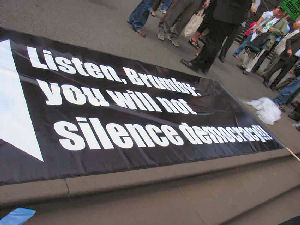 The letter below, which was part of the successful campaign, describes the danger which has, this time, been averted:

More about that law that won't go ahead now

Christine Pruneau, Secretary of the Macedon Ranges Residents' Association Inc., who is a remarkably clear writer, sent the following letter to Victorian Upper House parliamentarians to ask them to reject legislation that could define any councillor who may have previously actively opposed a particular development proposal as an 'interested party' and hence ineligible to vote.

The Association writes to ask you to please not support 78D (b) (ii) in its current form. Macedon Ranges Residents' Association Inc fully supports increased accountability and transparency, however we don't believe this provision will deliver effective or equitable outcomes, for the following reasons:

There isn't sufficient definition of what 78D (b) (ii) means and encompasses. E.g. What is objection and what is comment, and who decides? Which submissions, about what? Which matters? What counts, what doesn't? How specific or how broad? Does a submission preferring red bricks over grey in an Urban Design Framework create a conflict of interest in considering the UDF? Are objections or submissions at State and Federal level included? Does a written question at Council count, and if submissions on Council budgets do, why not submissions on associated Council Plans?

It's retrospective. E.g. Would an objection to cutting down trees 20 years ago veto voting on a proposal to plant trees on the same land now? How will anyone know who made which objections and submissions on what, and when?

It intimidates and diminishes democracy: those who actively participate or oppose, if elected, could have difficulty meeting community expectations for representation; it could influence decisions on whether or not to stand for election; it could deter people from participating in consultation and objection processes for fear action now may hamstring them later.

A person needs a law degree to understand any nuances or connections between this provision and Winky Pop, and most people who would work with and implement this law won't have that level of expertise, leaving its application open to wide interpretation, confusion and abuse. E.g. What distinguishes objections and submissions addressing policy and strategy from those promoting personal interests or gain, and who decides?

From an explanation given in yesterday's Age, it will target planning rather than all Council issues and responsibilities Councillors deal with.

It discriminates against those who oppose, without equally penalizing those who propose. Why aren't those who have applied for planning applications included? Letters of support for an application? Meetings and deals with developers?

It penalizes those who operate openly with written submissions in the public domain, but would not pick up those who operate with a nod and a wink, who favour a quiet word, who have others lobby for or represent them or their views. In the end honest people will be disadvantaged, without equal disadvantage to those who already operate surreptitiously.

It won't improve disclosure, and we doubt it will improve honesty. There would be those who have spoken, and those who vote but never speak.

We ask that you please consider these points before voting on Tuesday.