It is a peculiarity of Australian policy making that a decision with major import for our society, economy and environment — namely the size of our annual intake of permanent migrants — is made in virtual secrecy and announced in an obscure line of the annual budget papers and an equally obscure line of a Departmental press release. The decision is important because our prescribed annual migrant intake (last year it was set at 190,000) makes a large contribution to Australia’s annual population growth.

According the Australian Bureau of Statistics, in the year to 30 June 2017, our population grew by 388,100 to 24,598,900 people. We are adding people in numbers equivalent to a city the size of Canberra, every year. Net overseas migration (NOM) contributed 245,400 or 63.3% to this increase, while ‘natural’ increase was only 36.8% or 142,700 people. NOM is overwhelmingly the biggest contributor to our annual population increase, which at an annual growth rate of 1.6% is one of the highest in the OECD, in third place after Luxemborg and Switzerland. These facts are worth re-stating here because many people may not be aware just how much immigration is contributing to our very high rate of population growth (including a red-hot 2.3% in Victoria).

In turn, this population growth is putting pressure on housing prices, infrastructure, services and the environment.

However, a small change has occurred this year. For what is probably the first time, the Department of Home Affairs (formerly Immigration) has sought public submissions on the question of what are the ‘right’ settings for migrant intake. I have contributed a submission here (PDF). It is possible that this new step has been taken as a result of the recommendations of the Productivity Commissions report on Migrant Intake into Australia. This report, to which yours truly contributed two submissions, is a major work of synthesis which draws on a wide range of community and expert evidence.

It is important that the findings of this report be fully studied and the major recommendations implemented. One of the most important is Recommendation 3.1, for the Australian government to develop an explicit population policy to serve as a context for making decisions about migrant intake. A significant part of the Commission’s findings and recommendations are for more public consultation and input into the development of the proposed population policy, and into decisions about migrant intake in particular. In short, the Commission is calling for an injection of democracy into this whole policy area. 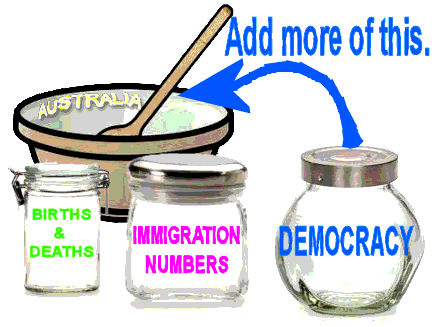 In the past I have been critical of the Productivity Commission for its narrow economic focus and lack of attention to broader sustainability issues. However in this case it is important to give credit where it is due. The Commission has made some important findings relating to the impact of immigration-fuelled population growth upon the environment, society and economy — albeit still discussed within an orthodox and unadventurous framework of economic analysis.

My submission [or submission second location] to the latest invitation by the Department of Home Affairs, goes into some detail to highlight the important findings and recommendations of the Commission report.