The ABC, Population Growth and A Big Australia: Official Complaint

During the week commencing 12 March 2018 the Australian Broadcasting Corporation aired a number of programs on a Big Australia — the phrase used to encapsulate debates about the desirability of Australia’s rapid immigration-fuelled population growth. The specific programs included episodes of 4 Corners and QandA. Subsequently I submitted an official editorial complaint as per the ABC’s complaint-handling process. In the complaint I took care to refer in detail to the ABC’s own documented editorial standards. The ABC has acknowledged receipt of the complaint and will respond in writing in due course. As this response may take some time to provide, in the meantime I am publishing the text of my complaint here (PDF), for the interest of those who follow the population and immigration debate. I will also publish the text of the ABC’s response when received. The summary of the complaint is as follows (extracted from the conclusion of the document). [Article first published at http://www.peakdecisions.org/the-abc-population-growth-and-a-big-australia-official-complaint/] 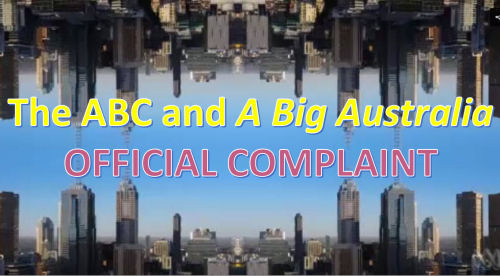 Based on the arguments and evidence presented in this complaint, it is impossible to avoid the conclusion that the Programs do not meet Editorial Policy 4. Highly relevant principal perspectives were omitted or given very limited time. The Programs overwhelmingly favoured one perspective: that a Big Australia is inevitable and there is no room for debate about alternative scenarios. The Programs ignored opportunities to present alternative perspectives even when they were offered as low-hanging fruit (for example, the video questions on QandA). There was repeated reliance on the same narrow range of expert opinion, while other expert opinion was omitted, in defiance of the weight of evidence on these matters. Given that these same one-sided viewpoints and imbalances were repeated over several programs, it is very hard to argue that excesses in one particular program were re-balanced by the views expressed in other programs during the week that the Programs were aired or published. And it is hard to avoid the conclusion that in this instance, these outcomes expressed an implied editorial stance of the ABC towards the desirability of a Big Australia.

I look forward to seeing the response.