Fire taxes and people taxes - population growth sure costs us!

Fire taxes and people taxes - Are we seeing the genesis of what could well be the next tax imposition for the people of Victoria to pay for the population growth that the state forces on us? 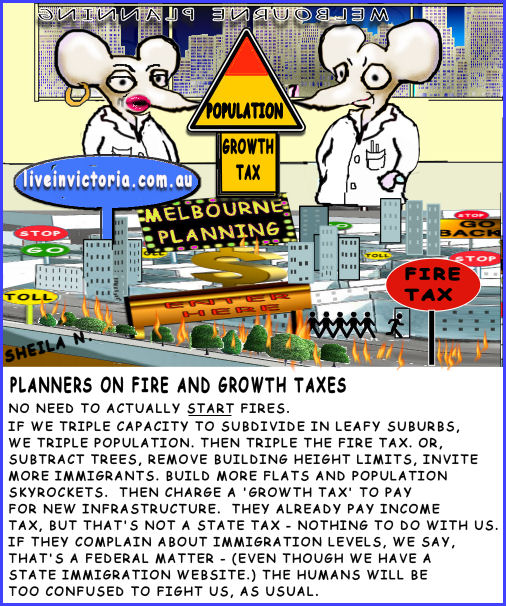 It’s been clear for many years that population growth is costing us all big time in Australia and that’s just the money side of it. I’ll set aside the impact of population growth on the environment, the welfare of other animals, our amenity and livability for another discussion.

About 10 years ago, it dawned on the people I know that population growth was not just something that happened on the outer fringes of the capital cities where we never go but that it was pushing its way into the established suburbs. At first, relatively unnoticed but as the rate and volume increased, we all watched in dismay as neigbouring suburban gardens disappeared, houses were demolished for larger, bulkier edifices and our familiar mix of built and un-built environment was transformed into something that would be unrecognizable to anyone who had been absent for a decade. The word “infrastructure” then insidiously crept into our media lexicon ad nauseum. Services such as sewerage and roads and provision of power that we took for granted as being provided by various arms of government suddenly seemed to be in a crisis of ageing and inadequacy. We all knew that there was a cost to this, ultimately payable by tax payers, but most people I spoke to saw this as being long into the future to the point they did not need to worry about it.

Dr Jane O’Sullivan http://www.onlineopinion.com.au/view.asp?article=10137 in March 2010, highlighted and quantified the inevitability of this burden with a reasonable assumption that the average lifespan of infrastructure would be conservatively 50 years so that on an annual basis this would amount to no more than 2%. If population growth is 2%, as it had been around the time she wrote the article, then the infrastructure capacity must be doubled! This is the position our growth obsessed governments are putting Australian citizens in.
The last growth figures (to March 2012 on the ABS website show a national growth rate of 1.5%) but this is still very high for a developed country. Victoria had the largest numerical increase in population in that year of any state- 82,500

So, the next blow to Victorians is that a planning academic called Roz Hansen has suggested to the state government that they impose a levy based on the value of people’s properties (and therefore adding to house price inflation) to pay for the additional infrastructure necessitated by population growth. This might be OK for someone like Roz Hansen, who we might reasonably assume has a hansome salary as planning adviser to the Baillieu government, but for people on retirement incomes living in ordinary suburbs, it could well mean not being able to afford to stay in their homes!

The Premier is in the clear so far, having said “no” to this idea. It is now on the agenda, however!

The Municipal Association of Victoria does not want the collection of such a tax to be imposed on councils and points out that people do not have unlimited resources. Victorians will also be paying a fire levy from July 2013 and the government proposes doubling the population of bushfire prone townships such as Warrandyte and urban suburbs by allowing 2 houses per residential lot.

Any tax based on the price of a property can become unaffordable to the resident as population growth drives up the price of housing without creating any more real wealth. Although the Georgists http://en.wikipedia.org/wiki/Georgism advocate a tax to property owners based on land value, in a “Geoist” world there is no income tax on wages. Hansen’s suggestion is Geoism without the benefits, although I doubt that this would be a conscious all encompassing tax philosophy on her part. She would still expect us to pay income tax with land-tax a new and additional impost.

What is frightening is that the population growth that drives such draconian potential policies is inflicted upon Victorians against their will, but our political system seems to provide us with no means to stop what over 70% of Victorians manifestly do not want. If a related new tax or charge is imposed, we also have almost no chance of stopping it, since such things tend these days to be decided in parliament, between elections and never to be submitted as items on political platforms at election time. And who can keep up with the sophistry? Isn't there more to life?

Economic growth will eat away at Melbourne

A growth-based economy flies in the face of any logic, or recognition that the world is finite and that life-giving resources are in rapid decline - not to mention the grave threats of climate change! The growth-based foundation of our economy is madness in light of the many costs. It's a way of digging ourselves into an abyss, with further to fall when we hit the limits to growth. Growing the size of our economy is compounding further the threats and tangles we already have in our cities. Our food bowls are under threat from urban sprawl, and the consumption of green-wedges for housing and businesses etc is a symptom of excessive population growth. The congestion on our roads is constricting productivity. Our politicians are living in a parallel world of plenty, of the past when we benefited from population growth.

"Planning" has become an oxymoron - as it means disassembling and deregulating any former planning principles and dismantling the axioms of good planning. What our "Planning" Minister Matthew Guy is doing is not "planning" but making a freeway open for open-slather developments in reaction to high population growth.

If the public in established areas are taxed to pay for population growth, then obviously population growth is not paying for itself. It would be political suicide to impose such as tax, as the vast majority of our population do not want "big Victoria" or "big Australia". If economic growth becomes obviously uneconomical, why are our governments forcing it on us? Why should people who don't need the infrastructure be forced to pay for something that is not only that they don't want, but contrary to their interests?

It's incredibly stupid to be driven by habit, and robotically addicted to an economic model that's not only expensive, environmentally threatening, but can't be maintained into the future. Next generations will be forced to accept less amenities, higher costs of living, loss of land, home ownership only for the privileged, and a Melbourne destroyed by greed.

Short-term greed, myopic politics, an unhealthy alliance between property developers, bankers, urban planners, businesses are mocking any form of "planning" and democracy. The planning we have today, rather than true planning for future continences and global threats, will make Melbourne and Victoria worse places to live.