The Status of U.S. Oil Production

Why has the U.S. mainstream media stopped cheerleading the fracking boom? Looks like production is no longer booming.

A field of pumpjacks

If you haven’t been paying attention, U.S. crude oil + condensate production reached a peak in 2019 at 12.29 million barrels/day (mb/d) on an annual basis.   After the price of oil collapsed in April of 2020, U.S. oil producers reduced drilling new wells and completing drilled wells, which contributed to a production decline to 11.28 mb/d on an annual basis in 2020.   Beyond the pandemic problems endured by oil producers, there were depletion problems as well, particularly for tight oil production.  Tight oil comes from the fracking of shale plays.

Of course the oil industry prefers higher prices to increase profitability.  The most effective measure to maximize price increases would be to stop all new U.S. oil development.  The problem with a measure like that is that U.S. oil production would decline because much of the production comes from tight oil wells that decline rapidly.

The industry has to drill and complete new wells at a brisk pace just to maintain production at a constant rate.  With increasing oil prices in 2021, the industry was projected to increase the number of new U.S. wells in 2021, versus 2020, by 15.4% with the number of Permian Basin wells increasing by 27.8% (the Permian Basin is the most prolific U.S. tight oil play).

I would attribute the extent to which the industry is showing discipline in limiting the number of new wells to the lack of profitabilty within the tight oil industry, in general, during the heyday of development from 2008 to 2019.  Reports put the fracking industry financial losses at over $300 billion from 2010 through 2020.  I never heard NPR and other media sources ever present that angle of the tight oil industry during the heyday period.

A taboo word for NPR news programs is depletion.  In their world, oil production can always be made to go up irrespective of how much oil has been extracted from a field, play or region  I suppose they get that idea from government agencies like the U.S. Department of Energy/Energy Information Administration (U.S. DOE/EIA).

Oil Production Projections from the U.S. DOE/EIA - A Trip into Fantasyland

*Actual production values are from the U.S. DOE/EIA

The governments of Norway and the United Kingdom provide excellent oil field production data so it was not difficult to make reasonable projections of what future oil production would be from those two countries.  It’s obvious that the U.S. DOE/EIA did not care to look at that data.

My impression is that projections from the U.S. DOE/EIA represent their political desires for future oil production, not an analysis of resource availability.  They seem to prefer a comforting message as opposed to an accurate message.

* Production data from the US DOE/EIA

Table III is a summary of the U.S. DOE/EIA oil production projections from their Annual Energy Outlook 2021.

For comparison purposes, the Bureau of Ocean Energy Management (BOEM) estimated as of Dec. 31, 2016 that the Gulf of Mexico Outer Continental Shelf, a fairly prolific oil province, had an estimated 23.73 billion barrels of oil in 1,315 fields.

Figure I illustrates the location of shale oil and gas plays in the U.S. so you have an idea where these plays are located.  Several of the plays on the map are gas plays, specifically Marcellus, Utica and Haynesville.

Shale Oil and Gas Plays in the U.S.

Essentially all of the tight oil production increase from shale plays in the U.S. has come from 5 plays: Permian Basin, Eagle-Ford, Bakken, Niobrara and Anadarko.  There was an intensive effort during the period 2008 through 2019 to increase production from those shale plays.  But the question that must now be asked is “How are those shale plays doing, in terms of production, and what is their future?”

During the period 2008 through 2019, oil industry representatives, politicians, government bureaucrats and media sources pushed the narrative that the U.S. oil supply was nearly infinite due to the huge reserves of tight oil.  I’m sure that was a very popular narrative with most of the American populous whose lifestyle is predicated on copious quantities of oil distillates.

A prime example of that narrative can be found in a Time magazine article of Jan. 3, 2019 titled “How an Oil Boom in West Texas Is Reshaping the World”.  In the article, it states that “by 2025, U.S. oil production is expected to equal that of Saudi Arabia and Russia combined, according to the International Energy Agency.”

The tone of the Time article mirrored the statement from the International Energy Agency and mirrored numerous segments on NPR news programs.  Since the start of the tight oil boom, NPR news programs have implied that there are huge reserves of tight oil that will maintain a high production level for many, many decades to come.  What NPR news segments have never stated concerning tight oil is that the sweet spots within the plays are much less extensive than the overall play area and that tight oil wells decline rapidly, 70-90% by the end of their 3rd year.

Before going into detail concerning the 5 shale plays that produced essentially all of the increase in tight oil production from 2008 to 2019, let’s look at a Texas gas play, the Barnett shale.  It was one of the truly hot plays in the early days of shale oil/gas development in the 2005-2010 period.  At the peak of those early days, there were approximately 200 rigs drilling lots of holes in the Barnett shale.

Figure II is a graph of Barnett shale gas production for the period 2008 through 2021. 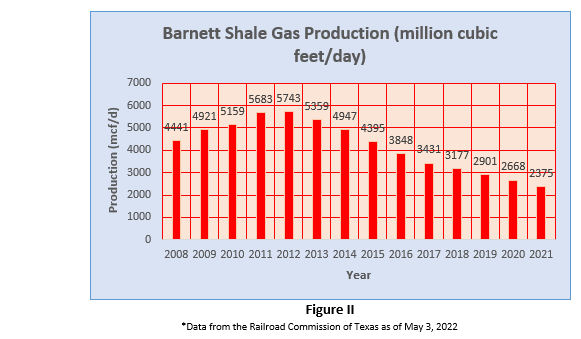 *Data from the Railroad Commission of Texas as of May 3, 2022

In my opinion, 4 of the top 5 shale oil plays in the U.S.: Bakken, Eagle-Ford, Anadarko and Niobrara will not again reach previous production levels and will, in general, decline like what has happened in the Barnett shale.

Figure III is a graph of North Dakota Bakken oil production and the number of oil wells in December of each year*100, where * means times, from 2008 through 2021. 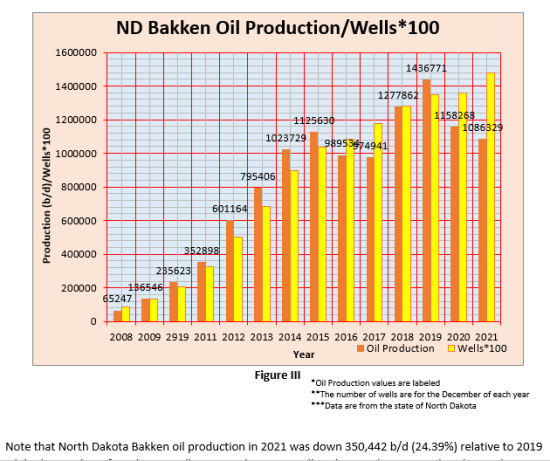 Figure IV is a graph of Eagle-Ford shale crude oil production for 2008 through 2021. 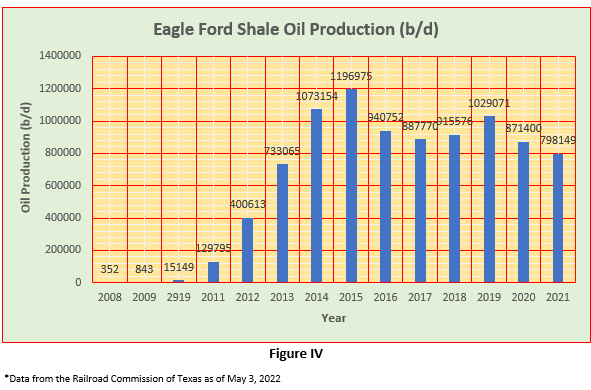 Figures V and VI are graphs of Niobrara and Anadarko shale plays.  In both cases it appears likely that production will not again reach the levels they had once attained.

*Graph from the U.S. DOE/EIA

*Graph from the U.S. DOE/EIA

In both Niobrara and Anadarko, the oil production rates, at present, are down approximately 200,000 b/d from their highest production levels.

Figure VII is a graph of Texas Permian Basin crude oil production.  Data are from the Railroad Commission of Texas. 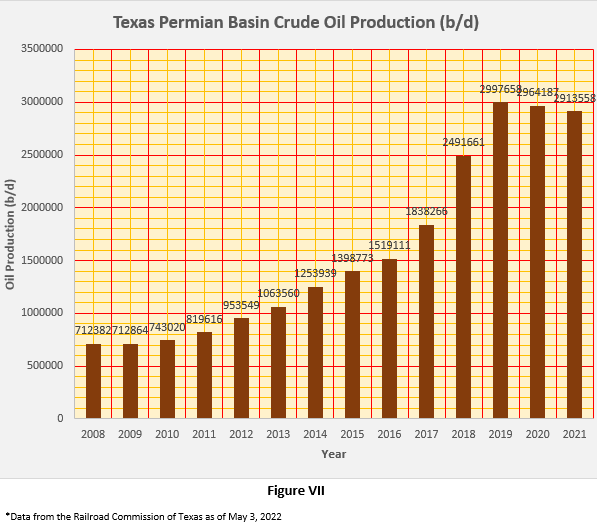 How long can production continue to increase in New Mexico?  I suspect it won’t be long before a peak is reached.

NPR news segments from 2008 through 2019 dealing with tight oil production came to look like cheerleading for the oil and gas industry.  NPR highlighted oil industry representatives who were cheerleaders for fracking.  Had they wanted to, NPR could have found petroleum geologists, petroleum engineers or other oil experts who could have provided a more tempered message for the future of fracking in the United States.  But their tight oil news segments seem to have been designed to give their listeners what they wanted their listeners to hear.  Basically it was happy talk.

A basic tenet of journalism is that everything should be questioned.  Unfortunately for NPR news journalists, that isn’t the approach they took when it came to U.S. tight oil production.

The Gulf of Mexico - When will the Party be over?

Figure VIII is a graph of oil production rates for the shallow and deep water Gulf of Mexico as well as total production from 1985 through 2021. 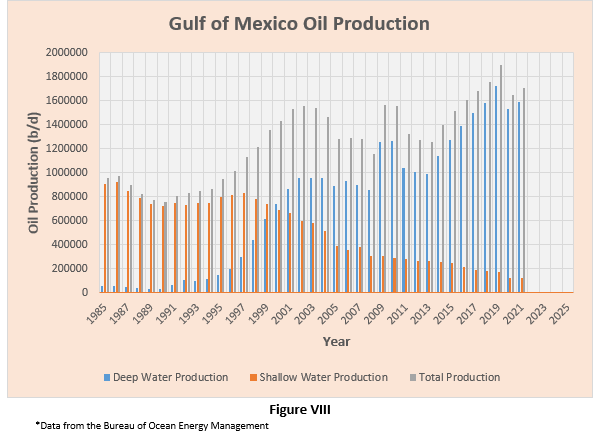 From 1986 to 2021, shallow water GOM production declined by 86.9%.  Depletion is the cause of the decline and no magic technology has prevented that from happening.

Deep water production reached its highest level in 2019 at 1.72 mb/d on an annual basis.  A case can be made that the industry throttled back production in 2020 and possibly delayed new projects due to the pandemic.

To maximize profitability of deep water fields, the industry cranks up production rapidly to a high production level, say 100,000 b/d or more, but peak production is reached within a year or two and generally followed by rapid decline.

In 2022, several fields will be brought on-line, most notably Mad Dog 2 and Vito.  Those fields will ramp up rapidly but their fresh production will be superimposed on many declining older fields.  We will have to wait and see how the production rate for the deep water GOM is influenced by those new fields in 2022 and 2023.

The deep water GOM is moving into an elevated state of maturity.  I wouldn’t be surprised if production doesn’t again achieve the rate in 2019 but we should wait a few years and see what happens.

Alaska - Looking for another Heyday

Figure IX is a graph of Alaskan oil production from 1973 through 2021. 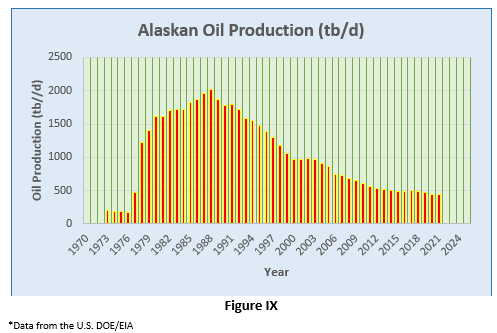 Production will continue to drift down in the presently producing fields so the desire of the oil industry is to add new production from the National Petroleum Reserve-Alaska (NPR-A), west of Prudhoe Bay, and conceivably the Arctic National Wildlife Refuge-Alaska (ANWR-A), east of Prudhoe Bay.

A few discoveries in the NPR-A have been made in recent years such as Willow, Willow West and Peregrine which explains the U.S. DOE/EIA projection in Table III for future Alaskan oil production.  The Willow field is projected to start production in 2024/2025.  Production from new fields will be superimposed on declining production from old fields which will limit any production rate increases for the state of Alaska. 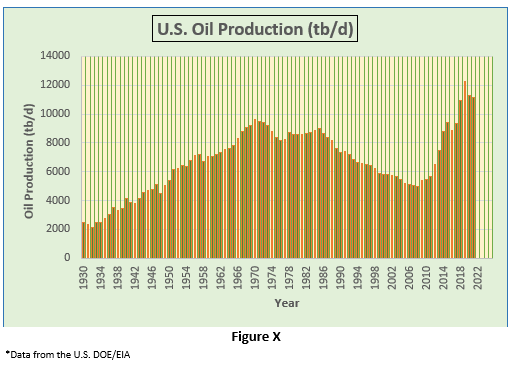 What remains for possible oil development in the U.S. that is at least somewhat favorable in terms of geology are some areas of the Gulf of Mexico and the Arctic National Wildlife Refuge in Alaska.

It’s hard to tell when, or if, ANWR-A will ever be developed for oil and gas.  In my view, it will probably be comparable in production potential to the NPR-A.  I think 3-4 billion barrels is about the best to be expected for economic recoverability.  That would have a minor impact on total U.S. oil production in the future.

Over the years I have seen estimates of recoverabley oil in ANWR-A of up to 300 billion barrels.  It’s amazing the degree to which some people in the oil industry can exaggerate.  The objective of the exaggeration is to make ANWR-A sound so good that it can’t be passed up as a place for oil development.

Since 2019, the cheerleading of the fracking boom by the mainstream U.S. media has gone silent.   It’s not unusual that there wasn’t media coverage in 2020 because of the downturn in oil production due to low oil prices but with prices increasing substantially in 2021 and 2022, there is still no cheerleading coverage of tight oil production that I have encountered.  I attribute that to the fact that production is no longer booming.

Due to the elevated price of oil at present it’s realistic that U.S. production will increase this year as future development is shifted into the near term.  That doesn’t mean that depletion has disappeared, just masked a bit.

Making up 1.10 mb/d to get back to the 2019 production level will be a considerable challenge and I think there is a significant possibility that 2019 will be the peak year of U.S. oil production associated with tight oil development.  A few more years of production below the 2019 level would confirm that conclusion.

Roger D. Blanchard is a chemistry instructor at Lake Superior State University. He is the author of The Future of Global Oil Production: Facts, Figures, Trends and Projections, by Region, Mcfarland & Co Inc., 2005