Can we escape a housing Ponzi nightmare without pain ?

Referring to the HILDA Report, the author suggests that, if immigration were reduced, a precipitate decline in house-prices could probably be adequately buffered by local buyers who currently cannot afford to enter the grossly inflated housing market.

Yet another report about homelessness in Australia 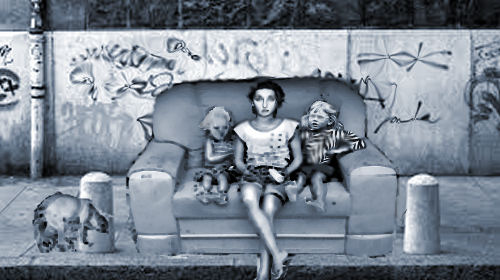 The main disturbing and most publicized finding on the day it was released was that home ownership in Australia is in steady decline and the steepest decline is in the state of Victoria. In Victoria I see the extreme manifestation of this trend, homelessness in the streets of Melbourne, every time I venture to the city or inner Melbourne areas such as Carlton. I actually know personally two people, one older and one young, who have experienced homelessness in Melbourne.

It seems obvious that for home ownership levels to recover, growth in house prices urgently needs to slow and stop. For the good of our society, prices even need to fall. Author of the HILDA Report, Professor Roger Wilkins, offered as a solution to the catastrophic decline in home ownership, the very meagre suggestion of an abolition of the capital gain tax discount, presumably as a disincentive to investment in housing. I would however maintain that people will still want to invest if a certain capital gain is to be had, even if they do pay tax! They would still be ahead!

Would a decline in Australian house prices be a concern?

For home owners with only one property and who are mortgage-free, a drop in the $ value of their houses really wouldn’t matter as long as it were part of a general, overall decline in property values. For those who are servicing a mortgage, a significant drop in property prices could be a problem, as their equity becomes less as a proportion of the amount owing.

So, can we escape a populating growth fueled housing Ponzi nightmare without collateral damage?

Initially, stabilising the $value of houses would not be as painful as a sudden decline.

I will take it as read that house price increases are due to a greater demand than there is supply. Demand has increased as net overseas migration has increased. A dramatic increase in Net Overseas Migration (NOM) dates back to John Howard’s time in power and has hardly let up. This number needs to come down.

One can also base the potential housing demand on the number of young adults in the population. In the 'best of all possible worlds, local young adults will want to establish their own households, whether singly or as couples, or with friends or siblings, as a first step. Immigrants, young or old, all need accommodation immediately on arrival.

If, for young Australians, buying a house is manageable and they enter the housing market (for many it is not affordable now) then that will actually increase demand from that age group. So reducing immigration dramatically would not be the only factor affecting prices. Lower immigration would have a downward effect and local young adults entering the market would tend to keep prices buoyant. The two effects would not necessarily at all be equal to one another and this balance would depend largely on the amount by which net overseas migration decreased.

In 2015 there were 1,054,565 people in Australia in the age group 24-26 (inclusive). At this age let’s assume young people have finished their post school education and are ready for the work force. They really need to leave home and either buy a house or rent. In 2011 (https://www.aihw.gov.au/WorkArea/DownloadAsset.aspx?id=60129552283) 29% of young people 18-34 were still living at home. All the young adults still living at home with their parents are potential home-grown consumers of housing.

Are vacancies as a result of deaths an adequate source of housing supply?

In Australia there are about 150,000 deaths per year. Not all these deaths release accommodation, as not all deaths are of people living alone. Some may leave a family behind! But even if 50% of them did result in a house coming for sale or rental, i.e. 70,000 houses or apartments, then there is still that potential demand from 1,054,565 people in the 24-26 age group alone (2015 ABS) and, if the cost of housing stabilized, maybe all young people would be seeking accommodation away from the family home. Even without immigration, there is still, from these figures, a much higher potential demand for housing than there is existing housing which may become vacant. This is because the present age group needing to establish themselves in their adult lives is much larger than the older group. For example, in the Baby Boomer age group in 2015, arbitrarily aged 60-63, there were 775,971 people (2015 ABS) . This is a much smaller number than the potential house hunters in the 24-26 age bracket. Even then, people in their early 60s can expect another 20 years of life and will need their homes in the interim. Even if they left their houses there would still not be enough houses for the more numerous early 20s group. If one were to expect an imminent bonanza from the group 20 years older than the Baby Boomers, one would be disappointed because there are only 223,430 in a three year age bracket in their early 80s!

Where does demand for housing come from?

1. Emerging young adults needing housing away from the family home either as newly formed couples or other arrangements. The actual number depends on which age group is selected but it is a larger number than in the age brackets where downsizing or death are likely

Of the investment properties, many of them will be available for rental. Although this does not help home ownership, at least it means, if rents are affordable, that people may be housed.

If foreign investment in Australian real estate were prohibited and net overseas migration reduced to levels say of the 1990s - 70,000 to 90,000 or lower, it would take extreme pressure off house prices. Then local young people might have a fighting chance of getting into the housing market. Young Australians who are now living at home with a parent or parents would get an opportunity to enter the market which would keep prices buoyant but not in the extreme.

Further demand for housing in Australia is surely waiting in the wings from people now sharing dwellings who would prefer less crowded arrangements. They would, in fact, become a new market for house sellers. The housing market would become more stable and gradually Australians could get used to a climate where a house was somewhere to live and not a speculative investment. The housing sector does not need to worry. If houses are on the cusp of affordable, I maintain there are local customers who will want to buy them or rent them. People would start to be able to exercise choices with respect to housing.

We are now in a dangerous cycle of price rises and of buyers, possibly in a defensive move, taking on enormous debt (relative to income) because they expect prices to go ever higher. A crash in prices would be wonderful for some and catastrophic for others, but I believe this situation can be avoided in Australia even with a significant cut to demand from overseas because of the age distribution of the population and the 'pent up' demand from young adults in the population.

Can't see how census can even be a snapshot

On census night 1996 I spent the night in a tiny hotel in William Creek on the Oodnadatta track. A local person was given responsibility for collecting people's responses. She had been all around the local countryside making sure every lone camper had been included. This attention to detail which I saw first hand as all our responses at the hotel that night were gathered up gave me confidence that the census would be a pretty accurate "snapshot" of who was in Australia and where that night. Last night respondents were encouraged to enter data online and the site crashed. People will have to enter it later but when? Will visitors to Australia who were present last night but will be in Amsterdam next week fill it in? I don't think so. It will not be a snapshot, but rather, a blur, surely?

Chorus of groups calling out for immigration cut to New Zealand

Soaring house prices in Auckland, New Zealand's largest city, are prompting growing calls for cuts in immigration, which is running at record levels. It is not only politicians and commentators that are talking about cutting the number of immigrants -- even the central bank has joined the chorus, alongside one of the country's largest commercial banks. Please read that last sentence - people are actually TALKING about cutting immigration because house prices are surging. Not only is there "talk" about it, but politicians, commentators and even the banks have joined the chorus! A far cry from Australia, where there is NEVER any "talk" about cutting immigration, or even relating it to unaffordable housing! A Newshub Reid Research poll released on Tuesday showed that 60% of the 1,000 people surveyed agreed that the government should let fewer immigrants into New Zealand. If there's any "anti-immigration" suggestions in Australia, it's linked with "racism", or "xenophobia" - almost as bad as being a paedophile or social pariah! Reports of Auckland families living in cars and garages as rents soar could pose a threat to the center-right National Party's hopes of winning a fourth consecutive election next year. Why is it so hard to broach the subject of population growth in Australia? We've become totally constrained by PC - political correctness and the power of the extreme Left. The central bank, the Reserve Bank of New Zealand, this month called on the government to consider cutting the level of immigration as part of the solution to the Auckland housing crisis. Here, banks and corporations are behind the push to keep up immigration rates and keep inflating the housing bubble - despite homelessness and mortgage stress. What now passes as our "economy" is merely political manipulation, selling out the welfare of the public, and pure greed. We have strong Multiculturalism in Australia, which is now a euphemism for enjoying our "diversity" from high immigration - so it's really their spending power, on housing, that's really wanted - not their culture!http://asia.nikkei.com/Markets/Property/New-Zealand-home-prices-prompt-calls-for-immigration-cut