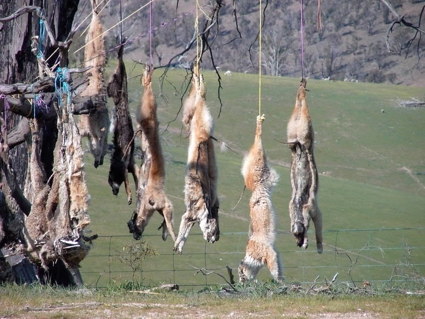 In terms of environmental management Australia is just a collection of colonies not unlike the days of very early settlement. Policies that govern the control of feral animals and natives that are perceived as pests differ from state to state (and territory).
In Western Australia, it is legal for pastoralists to make a living from the keeping of feral goat herds. Ooops! Did I say feral goats….. they are now called rangeland goats. Will Scott is a pastoralist that keeps a “rangeland goat” herd of approximately 40,000 goats on his 400,000 hectare property near Mt Magnet in WA. This huge collection of one of the most environmentally destructive feral animals is maintained on a property with no fencing whatsoever.

You would be excused for thinking that Will Scott’s choice of livestock is a throw back to the 19th century however he does not stop there. In recent times he has called on the state government to increase their efforts in controlling wild dog numbers as they have reduced his “rangeland goat” herd by one half in a matter of 18 months. At this point it should be pointed out that the use of the term “wild dog” is thrown around by landholders freely and collectively describes dingoes, domestic dogs and hybrids. This particular part of Western Australia contains predominantly dingoes but that of course depends on who you are listening to. In a recent article in “The West Australian” a farmer with a property closer to the coast estimated the proportion of dingoes to be 65%, the remainder being either feral domestic dogs or hybrids. A dingo conservationist would more than likely increase that number.

Nevertheless, the removal of our native mammalian top-order predator from pastoral areas is an obsession of landholders Australia wide. Will Scott would have us believe that increasing 1080 baiting programmes as well as increasing government funded doggers is necessary for the sake of his goat herd. Unfortunately our state government has obliged and now pays the salary of 8 fulltime doggers to bait and lay steel traps. The images of dingoes hanging from trees and fences reminds me of similar images depicting wedge tailed eagles or Tasmanian tigers that suffered a similar fate in days gone by. Both of these misunderstood animals were demonised by the pastoral industry of the time making it easier for the general public to accept their wholesale slaughter. Personally I find it offensive that we are slaughtering our native predators to protect the herds of feral animals that provide the income for so few.

There is no mistaking the fact that dingoes and sheep do not mix. Dingoes are notorious for killing more sheep than they can possibly eat and this doesn’t win them any friends amongst landholders. More enlightened pastoralists are looking at alternative methods to shooting, trapping and baiting such as employing the services of guard dogs or donkeys. This appears to be a very effective method in reducing stock losses and surely represents the way forward for this industry.

The dingo's role in Australian ecosystems

It has been demonstrated time and time again that dingoes are an essential ecosystem component on mainland Australia. Where there are dingoes there is biodiversity, where there are dingoes there are relatively few small predators such as cats or foxes. There are also reduced numbers of other feral animals including rabbits and pigs. Last year University of Sydney scientist Dr Mike Letnic published a study outlining the crucial role dingoes play in Australian ecosystems. The presence of dingoes in an area is associated with an increase in the numbers of small native mammals and a decrease in fox and cat numbers. Dingoes are also a key regulator of goat numbers as Will Scott has already pointed out however this is an environmental benefit and therefore has no short term economic value to pastoralists like Will Scott or the government of the day. Unfortunately our government of the day is run by Colin Barnett who also happens to be a farmer of the less enlightened kind himself and as such does not rate environmental issues at the top of his list. One only needs to look at Barnett's track record of staff and ministerial appointments to indicate how environmental issues are dealt with in WA. His appointment of Donna Faragher as environment minister clearly represents a conflict of interests due to her husband working for LNG giant Woodside Petroleum in government relations. Faragher's defence of Woodside's seismic blasting in waters containing pregnant humpback whales clearly demonstrates how obscene the current situation is. In addition, Barnett appointed a Woodside executive as his chief of staff, our mining minister has interests in BHP Billiton and Woodside AND Barnett's daughter in law is a senior executive at Woodside.

The issue of dingo predation on kangaroos seems to generate differing opinions amongst landholders and those who oppose the kangaroo industry. The science however continually demonstrates that dingoes are in fact a significant predator of kangaroos particularly at the juvenile level. There have been some arguments put forward that dingoes have had little impact on kangaroo numbers however I would suggest this is not the case. It is extremely unlikely that a “herbivore utopia” existed in Australia prior to white settlement. Kangaroos like any other herbivore are subject to predation by a top order predator, this relationship is vital to the survival of both species as it is in any prey/predator relationship throughout the world. Dingoes are also capable of taking down the oldest and sickest individuals particularly when they are hunting in packs. Dingo predation of kangaroo populations at the juvenile and very old level is a natural way of maintaining a healthy population of both dingoes and kangaroos. Contrast this with the kangaroo industry picking off individuals in their prime or just after the juvenile stage and you have a disaster just waiting to happen.

Kangaroo meat advocates will not mention the dingo 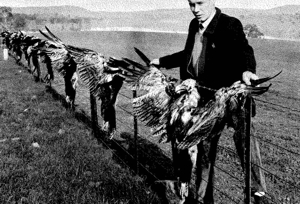 Advocates of the kangaroo industry will seldom acknowledge the role the dingo plays (or should play) in the Australian environment. The consumption of kangaroo meat as a green alternative to traditional livestock is trumpeted as a key step towards improving Australia’s degraded rangelands however the dingo doesn’t rate a mention in the rhetoric spouted by scientists such as Professor Mike Archer. He is more interested in resurrecting the Tasmanian tiger using cloning tools similar to those portrayed in the film “Jurassic Park”. Surely we should be more interested in saving a top order native predator such as the dingo who is still amongst us but suffers an image problem due the rantings of goat farmers and the like who would have us all believe the dingo is all but bred out due to wild feral dogs. Public sympathy appears to be low for the plight of the dingo due to the acceptance of barbaric methods still practised when killing these animals. Newspaper articles depicting steel-jaw traps and dingoes hanging from trees do not generate the outrage you would expect for a native animal but then again the public has been conditioned to not really see dingoes as true native animals.

The introduction of the dingo

After all, they are just another dog that can interbreed with our more familiar domestic dogs and they were introduced to this continent approximately 5000 years ago. The important factor here is the role that they have played in Australia’s ecosystems over the last 5000 or so years. It is generally accepted that the arrival of the dingo onto Australian shores and its subsequent invasion of every habitat resulted in the extinction of the Tasmanian tiger on the mainland. The dingo was a more efficient predator and some suggest the tiger itself formed part of the dingoes diet which in itself is extremely varied and can include anything from grasshoppers to the biggest red kangaroo. The newest addition to Australia’s native fauna then proceeded to settle in for several millennia before the arrival of the white man. The dingo wasn’t a marsupial like its predecessor but it wasn’t the first placental mammal to set foot on Australian shores. By this time several species of bats and water rats had already made Australia their home and of course the first Australians: the Aboriginals had been here for a very, very long time.

5000 years is a long time for a species to settle in, the rich biodiversity of the Australian continent as witnessed by the first white settlers is proof the dingo is a true native animal and is more than capable of playing its important predatory role in the Australian environment. The fact that it is a dog is irrelevant. Some scientists argue that even hybrid dingoes can fill that role as long as they share the same behavioural traits that are unique to Australian dingoes.

With this in mind, why are dingoes not included in biodiversity programmes such as the ACT kangaroo management plan? The reason given is that the reintroduction of native predators is not “socially acceptable” however this is not applied to the brutal slaughtering of thousands of kangaroos via the gun. Is herding hundreds of kangaroos including joeys into a pen and then killing them via lethal injection “socially acceptable”?

I have heard that the kangaroo and the emu are included on the Australian coat of arms because neither can take a backward step. If our motto is to only move forward why can’t we apply this thinking when it comes to the treatment of our native animals and environment. From the very first day white people arrived in Australia we have shot, poisoned and trapped any animal that has stood in our way. Today we continue these barbaric actions on an even greater scale in our endless quest to “tame” what is left of our wilderness. As long as state governments continue to tow the line with cattle, sheep and goat farmers and their representative bodies such as Agforce our wildlife is doomed. As long as state governments such as the current government in Western Australia resemble mining company boardrooms the environment will always finish last.