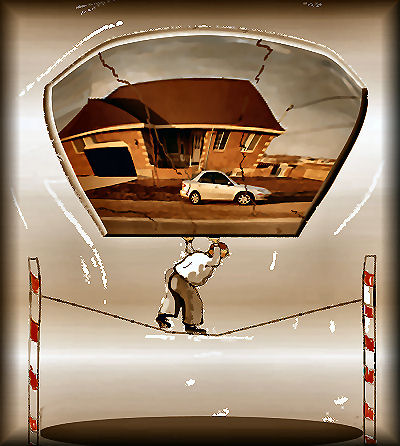 [The original title was "With governments like this, who needs enemies" - changed for a more indicative one.]

At Rudd to announce rescue package for homeowners, we can read that the Federal Government says that the Commonwealth, NAB, Westpac and the ANZ banks are postponing mortgage repayments for up to one year for people in financial difficulty.

The interest, however, will be added to the total amount of the loan.

"Plus there's the distinct possibility that if/when inflation kicks in from all the money printing. or oil prices going back up, interest rates will also go back up."

"This is no solution!" he says.

Editor: Debt and house prices are what is keeping people poor and production expensive and working hours long and wages down. Who cares about the banks - which have become nothing much more than growth-lobbyist home loan merchants? They have been having their cake and eating it for years. They need the chop, like Marie-Antoinette.