Vic Government takes a leaf out of King Herod's book 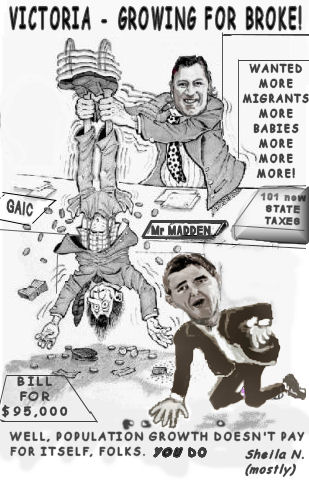 (Parts of cartoon based on one signed "V.D." which is all over the net, but no attributions available.)

From Beveridge in the north, Werribee and Melton in the west, to Cranbourne in the south-east, thousands of Victorians have recently been notified of the Victorian Labor Government’s intention to introduce what they are calling a ‘Growth Area Infrastructure Contribution’ (GAIC) for selected areas around Melbourne.

What kind of government just dreams up new taxes of $95,000?

In effect, this ‘contribution’ is a $95,000 per hectare tax on all vacant properties over one acre, and all properties over five acres with homes when you sell, regardless of the sale price.

Imagine the young couple who are struggling to pay the mortgage on a small property of six acres where they have built, or hope to build their dream home and raise a family. One of them loses their job due to the current economic climate and they decide they can no longer afford their dream. What chance would they have of raising enough from the sale of their land in a depressed market to cover what they owe the bank, plus over $230,000 for the Labor Government’s share?

Imagine the farmer who has put his blood, sweat and tears into life on the land and is coming to the end of his working life. His plans have always been, to sell his 100 acre farm. He’s struggled through years of drought to make ends meet and now, out of the blue, he has to pay the government over $3.8 million for the privilege of selling his property.

In the likely event that he doesn’t sell, Mr. Brumby and Mr. Madden will simply pass the $3.8 million debt (indexed annually) on to his children or widow when he dies. Whatever you do, Mr. Farmer, don’t get divorced and sell your property as part of the settlement, as they’ll take it from you then!

Who will stop this dictatorship?

When Victorians elected the Labor Government did we give them a mandate to simply take a large portion of our great Australian dream - a home which we have worked hard to get? We need to tell them, NOW, that we will not stand for a government that believes it has a right to introduce legislation such as this. The theft of privately owned property by force is something that we expect to hear of happening in communist or fascist countries, not in the lucky country, our country, Australia!

If you believe that it is unfair for Mr. Brumby’s duly elected State Labor Government to take a large portion of our homes in this manner please let them know that it will be political suicide for them to proceed with this legislation. Remember there’s an election next year! Today, email them, fax them or even just mail this page to them with a note voicing your disapproval at them stealing our homes by stealth.

Your home could be in the next lot that they steal, so tell them now, that it’s not acceptable!

Something in Victoria's water?

Subject was: "Something in the water?" - JS Our Brumby government is clearly corrupt and are unable to manage Victoria. The elections can't come soon enough. They are hauling in money from growth, and they are part of the pro-growth land developers and building industry. They obviously have vested interests in extorting the public. It is unbelievable that the public are so quiet. Is there something in the water?

Not in the water, in the media

The Victorian and Australian media simply don't give any political alternatives a chance. They only promote either Liberal or Labour and both now seem incapable of criticising unsustainable growthism and corruption. If the media did not run the elections, we might have a chance. What will you do when the elections come round? Vote for the Libs? What will they do that is different? They are like the same party. Equally shameless. Sheila Newman, population sociologisthome page