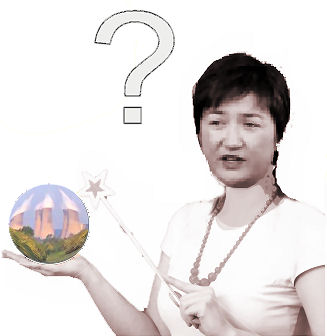 On 21 September 2009 you had the following exchange on the Breakfast Show on ABC Radio:

Penny Wong:
"Well, absolutely not, because the key issue with reducing emissions is that we have to de-link our levels of carbon pollution from economic growth and population growth. We have to ... Whereas the last few hundred years emissions growth - that is, growth in our carbon pollution - has essentially tracked our population and economic growth, we have to break that link and that the whole world has to break that link and so does Australia. So the key issue here is breaking that link, not, not trying to reduce population."

Please tell me exactly what theory and model you are relying on for this proposed delinking of energy from population numbers in a context of economic growth. Please tell me why you believe it is inconceivable to simply allow Australia's population to return to natural levels of growth rather than interfere to engineer growth ever-upwards.

I am aware of economic beliefs that energy calory decrease trends since the late 1970s meant that there had been a delinking of energy use from productivity. This, however, has been shown to be mistaken. What had changed was the choice of and quality of fuels used for different tasks. Overall fuel use (and concommitant carbon gas output) has continued to increase with economic growth.

If it had failed to do so then the laws of thermodynamics would have been repealed, and that is impossible.

Perhaps you are relying on centrifugal separation based nuclear power, which admittedly uses less electrical energy than the old gaseous diffusion type?

Nonetheless, surely you cannot be unaware that, to replace Australia's current electrical consumption would require at least one thousand MWe nuclear power plant for each million Australians, each supplying 25PJ, plus an average of 4.8 new nuclear plants per year to supply annual growth in consumption. And that is without replacing the energy that oil and gas depletion will leave unsupplied, and it is without catering to the total electrical output of electricity producers, much of which will never reach any purposeful productive activity.

I await your response with real anxiety. Please reply as soon as possible, citing your theory, data and sources.

QUESTION FOR CLIMATE CHANGE MINISTER PENNY WONG I understand that Australia, if it keeps to its present course, is projected to grow its population by some 14 million people, or 65%, in just 25 years. Climate Change Minister Penny Wong of the growthist Labor administration of Kevin Rudd, was asked this question on September 21/09: Interviewer: "Minister, Australia's population is projected to increase by 65% to the level of 30m people by 2050. During that same period, the government is committed to cutting our carbon emissions by 60%. Aren't those goals or those facts mutually exclusive? How are we going to massively cut carbon as our population continues to massively grow?" Penny Wong: "Well, absolutely not, because the key issue with reducing emissions is that we have to de-link our levels of carbon pollution from economic growth and population growth. We have to ... Whereas the last few hundred years emissions growth - that is, growth in our carbon pollution - has essentially tracked our population and economic growth, we have to break that link and that the whole world has to break that link and so does Australia. So the key issue here is breaking that link, not, not trying to reduce population." http://candobetter.org/SheilaNewman Letter to the Minister: Penny, I have a weight problem. My doctor tells me that if I persist in eating a litre of ice-cream every day, I will increase my weight by 65% in just 25 months. But since it is chocolate ice-cream, I feel it is racist to pin the blame for my growing girth on it. I also feel that it is possible to “de-couple” my weight gain from my caloric intake. In fact, while I now wolf down 4,000 calories a day, I believe that I should look forward to doubling that intake by 2035. I need a caloric stimulus package that will kick-start my body and brain from its current slow-down. I can compensate for any negative consequences by metabolizing the ice cream more efficiently. I call it “smart gluttony”, and already the environmental movement is wanting to adopt the phrase as a slogan for their “green living” tips. If I buy green-coloured ice cream, lime-flavoured, it would be a symbolic statement of my fresh approach to a sustainable future for my body. As we know, cosmetic labeling in and of itself usually suffices for a substantive policy shift. Ms. Wong, I must congratulate you for your faith in human ingenuity. Julian Simon was right. Malthusians chronically underestimate our intelligence. With enough brainpower, we can have our cake (or ice cream) and eat it too. Ice cream that doesn’t consist of calories. Growth that doesn’t result in carbon emissions. The Peter Pan School of Greenwash. Make a wish that growth will have no ecological cost, and that wish will make it true. Pure magic. Hey, I have seen that trick unfold in Canada too. We signed on to the Kyoto accords in 1990 with the promise that we would reduce our greenhouse gas emissions by 6% by 2012 and now we are 30% beyond our emissions level in 1990. Of course, that had nothing to do with the fact that immigrant-driven growth has increased our population level by 19%. Like the environmental establishment, we simply ‘de-coupled’ our imagination from reality. Population growth, where? Who cares? Oh to be young again. Hopeful, credulous and cornucopian. Tim Murray September 25/09

By Subsisting on Air, We can DOUBLE our population

Proponents of 'green living" lifestyles tell me that by adopting spartan habits and living like Ghandi, we could make room for many more billions of human beings. Makes a lot of sense. Squeeze together more tightly so that more people can fill in the gap. Then repeat the process ad infinitum. But how could we feed such a population? Vegan proselytizers argue that we could do that by abstaining from meat consumption, thereby freeing up more resources to feed more people, who of course, will breed more people who will in turn inflict even greater ecological damage than ever before. Gotta love those efficiency paradoxes! But why stop at veganism? Why not a permanent fast modeled on the lifestyle of cultists who claim to be drawing nourishment exclusively from oxygen? Perhaps we could become a race of 15 billion “breatharians” who simply subsist on air in a world where thirst is decoupled from water use and hunger is decoupled from food use. As our population grows, so grows the pool of our ideas. As Julian Simon hypothesized, the law of averages would dictate that twice the number of people would double our chance of finding a genius who could invented a technology that would resurrect extinct species and replenish the soil without fossil fuel fertilizers. Failing that, we could experience a decoupling of our temporal existence entirely from a life as disembodied spirts. Freed from our earthly moorings, we would then be free from all ecological constaints, a state of being which growthists have already attained---in their imagination. The sky is the limit! TM

Kevin Rudd's white paper on climate change meant that our reduction on greenhouse gas emissions by 2020 was only to be 5% on 1990 outputs, maybe more depending on what other countries decide to do. This was because of our high population growth - 45% extra by 2020 compared to 1990. Now our climate change minister has negated this by "de - linking" population growth from emissions! Surely a contradiction? What are they smoking in Canberra? The ETS will be another tax on our already over-taxed natural resources. Why are people so sleepy?

The pain we will undergo if the Emissions Trading Scheme were to become law could conceivably make some sense if we had set ourselves a traget for the reduction in carbon dioxide emissions that would make some difference. I would, nevertheless, still remain opposed to the ETS, but to put ourselves through all this for a goal of a 5% reduction (which in all likelihood won't be achieved anyway because of the Government's record high immigration program) is insane beyond belief. Knowing that no political leaders can possibly be that stupid, it is obvious that their actual goals cannot be the same as their stated goals.

Our greenhouse gas emissions are increasing!

According to the last accounts, Australia's greenhouse gases are increasing, and we are more than 10 years off 2020! According to Rudd, climate change was the great moral issue and challenge of our time. His strong stance on this issue was a stark contrast to Howards, but there has been little done except talk and postering. It is not surprising Penny Wong has had to de-link population growth from emission levels! There is no chance of having reduced emissions by 2020 if we are increasing! Our leaders have already surveyed the public, and their interest in this topic has subsided! How very convenient polls can be!