Carbon taxes in Sweden since 1991, low population and good economy 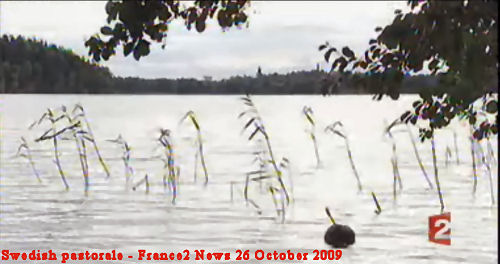 Since 1991 Sweden has had a carbon tax of 103 Euros per tonne per taxpayer
It is not compensated in any way and it is not a focus of political protest.

Sweden is proud of the way its towns and cities open out onto green and wild natural spaces.

The tax represents one quarter of the price of petrol and diesel, but most Swedes do not realise this, since the tax is not stated at the pumps.
A litre of diesel costs 1.11 Euros of which 30 centimes is carbon tax.
Driving habits have not changed so much, but domestic heating systems have.
Fuel heating is often swapped for electric heating, with one third subsidised by the state.
The cost of electricity, however, has risen.

Families pay 4 times as much for carbon emissions than industry does, but housing rights are guaranteed and workers have good industrial and unemployment protection and guaranteed rights to free health care.

The government believes that carbon emissions have been reduced by 9% in Sweden due to the tax.
At the same time their economic growth has increased by 40% in 18 years.

Now the average Swedish person emits one tonne less of carbon than a French person, and 16 tonnes less than an American.

Swedish reality is a challenge to the very inferior future that US, British, Canadian and Australian governments and media market to their own populations. Why do we put up with it? Perhaps because we are told that no other way exists. 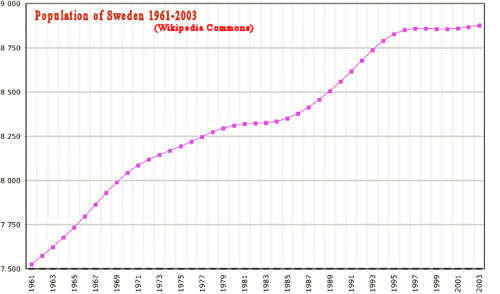 In fact Sweden's population has not increased significantly since 1995, when it began to level out after a steep growth curve.
Most of the increase over deaths is due to immigration from within Western Europe. (Radio Sweden 12 August).

Unlike Australia, the Swedes have learned not to overshoot their carrying capacity and to retain democracy through protecting the established population's networks.
Australia, to the contrary, practices demographic splintering and top-down government, based on an unsustainable extractive commodity and land-speculation economy.

Sweden is able to have a healthy economy and good multi-party democracy where it provides far superior rights to its citizens than Australia does, and in the context of trends to population stability! Compare this actuality to the ideology promoted by the Australian government and the Murdoch media.

In the 19th century, Sweden's yearly population growth rate peaked at 1.2% (i.e. it doubled in less than 60 years), compared to 1% today (migration excluded). This considerable population growth rate led, before the Industrial Revolution, to a pauperization of the rural population, for each generation inherited smaller and smaller shares. Due to years of crop failure in the 1840s and 1860s, the U.S. Homestead Act of 1862, and to a lesser extent religious persecution, emigration started and grew. Between 1850 and 1930 1,050,000 Swedes emigrated (re-migration excluded), chiefly to Canada, U.S. and to Denmark. If they had not left, Sweden's population would have been about 2,000,000 higher today, given that famine and civil war hadn't been the outcome of their staying. (After 1929 the net-migration has been directed towards Sweden.) Wikipedia: http://en.wikipedia.org/wiki/Demographics_of_Sweden

Sweden has a strictly regulated rental market, with laws and taxes that prohibit speculation. (The Australian housing industry would not last a minute there.)
Housing rights are legally guaranteed in Sweden for citizens or legal immigrants. This is also the case in EU countries. (Britain, with an exploitative private housing dominated market similar to Australia's, is going to have a very hard time conforming to this requirement of EU participation.)

Work and standard of living

There is no national minimum wage law. Wages were set by collective bargaining contracts every year. Nonunion establishments generally observe these contracts. Substantial benefits (e.g., housing, childcare) provided by social welfare entitlement programs assured even the lowest-paid workers and their families a decent standard of living. Foreign companies employing workers from their country of origin at wage levels below minimums stipulated in domestic collective-bargaining contracts created frictions in the labor market. For example, in one case, Swedish workers blocked a work site in the city of Vaxholm because construction workers from Latvia, who had been contracted to build a school, did not have collective agreements with a Swedish union.

The legal standard workweek is 40 hours or less. Both the law and collective bargaining agreements regulate overtime and rest periods. The maximum allowable overtime per year is two hundred hours. The law requires a minimum period of 36 consecutive hours of rest, preferably on weekends, during a period of 7 days. The law also provides employees with a minimum of five weeks' paid annual leave. The government effectively enforced these standards.

The work environment authority, a government?appointed board, issued occupational health and safety regulations; trained union stewards, safety ombudsmen, and government inspectors monitored them. Safety ombudsmen have the authority to stop unsafe activity immediately and to call in an inspector. These rules were effectively enforced. Work places were generally safe and healthy. In law and practice, workers could remove themselves from situations that endangered their health or safety without jeopardizing their future employment.

Guess what, Sweden has ten nuclear power plants that supply 46% of the power they use so they can deal with a few taxes. What you fail to state in your nordic footprint is that Sweden also own 12 coal fired powerplants in other regions. Greenpeace dumped tons of coal on parliment's doorstep in protest. You paint a rosy picture of nordic standards but have a look at the reactor incidents and problems developing in regard to immigrants, the stats you show are only up to 2003. They are currently taking more refugees from Iraq than any other country. They are headed for a big hangover soon.

Sheila, I forgot to mention the poor forest practices and importing of timber from baltic regions. The high concentrations of immigrants are not intergrating and crime is rising. They import more oil per capita than any other country. Currently the engineering industry and the car manufacturing account for over 40% of the Swedish industry. The wood, pulp and paper industry accounts for over 20% the chemical industry about 12%. not very eco, me thinks. Current population is just over 9.31 million.

This is an outstanding blog The way u write is fabulous. Thanks a lot. www.webroyalty.com Editorial comment: Nice of you to say so, Nick. Thank you. I'm not sure if webroyalty is of interest to our site's visitors, but we still appreciate compliments and, sometimes, even flattery. - JS