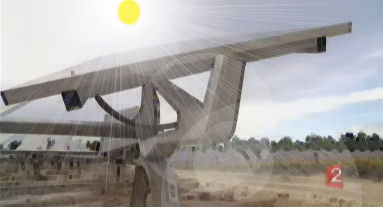 (Scroll down for information from writers in Australia, Canada, USA to date. More input welcome)

In France, as in Australia, many people have installed solar panels in order to benefit from selling electricity they generate but do not use back to the grid. In France they sell it back to Electricité de France (EDF). The number of professionals who supply electricity back to the grid in France is increasing.[1] 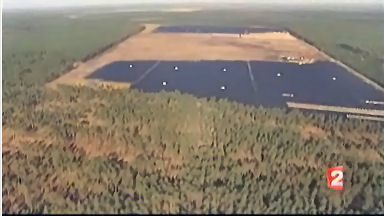 In the photograph of a rural landscape we can see the equivalent of 300 football fields has been dedicated to photovoltaic surfaces. 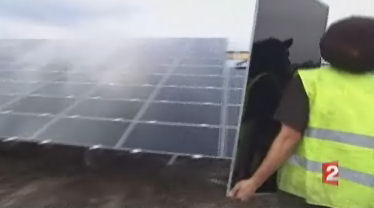 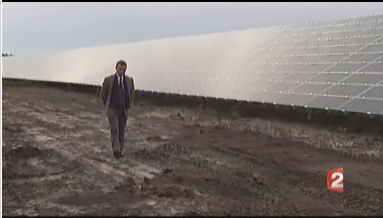 The photovoltaic-center is huge, on a non-human scale.

When it is finished it will be the biggest site in Europe. It is 300 hectares (ha) in area and is expected to produce 76 megawats (MW) once completed, which would supply the consumption of something around 40,000 citizens. 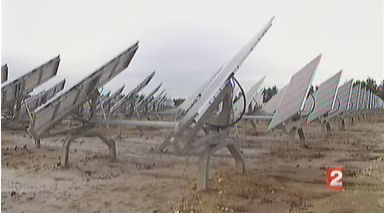 This year part of this new photovoltaic center will use 'tracking' technology whereby the panels can turn themselves to follow the sun. This is expected to increase electricity production by between 20 and 30 per cent.

France's 175 MW of public stock of photovoltaic panels was multiplied by three in one year, but remains 30 times less than the German stock. 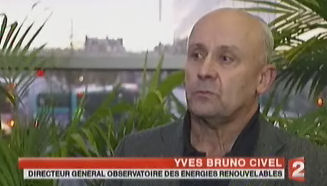 Yves Bruno Civel, General Director of the Observatory of Renewable Energyies, commented, "If France tried to catch up with Germany by making giant photovoltaic installations, it would run into limitations eventually due to competition for ground space, which is already intense, between those who want more land to expand cities and roads [2]and those who want it for biofuels and food." 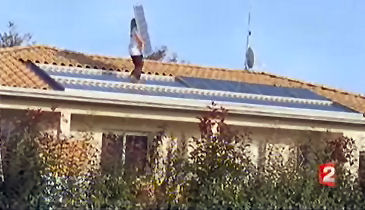 Photovoltaic panels are not only found in vast fields. More and more are found on house roofs. Individuals sell all their production to EDF. They get 60c per kilowatt and can buy back electricity for only 10c a kilowatt. 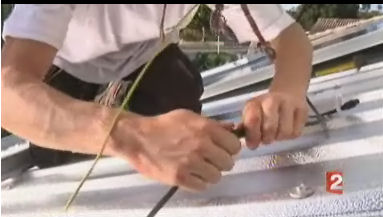 Erwan Tesson, Director of Arkensol Society says this isn't the only benefit. You get money back on income tax, which, for the average family in France, would amount to 8000 Euros. 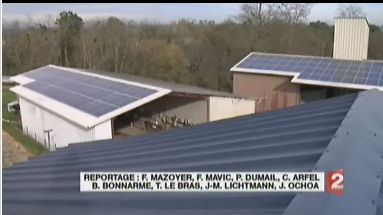 Frederic Borrot, a farmer in Gironde says, "It's better than life insurance. The return over 20 years is 10-12 per cent."

With 200 square meters of photovoltaic panels on his outbuildings a farmer can pay back his loan. Borrot's aim is to prepare for the future.

"To have additional revenue and for my retirement, because today farmers haven't got much of a retirement income - far from it. With this one can expect a monthly return of 1,500 Euros.

But future profits may not be guaranteed

The possibility that the rates the EDF currently pays may be revised downwards is causing some anxiety - especially for professionals.

In France 34,000 projects are in a queue for connection.

The PV industry in OZ is dominated by installers. There is no longer any pull through that builds a real industry with the departure of BP Solar. Their factory is now in the hands of a nuclear company and the only other organisation is Spark Solar in Canberra.

The "industry" is hardly stable and has to react to the mismanagement in Canberra - the investment is not there and the
players are scratching at the edges. Australia has failed and failed to get to grips with an industrial development policy that creates stability and certainty. The knee jerk operates. There is no sound thinking, and any of the sound thinkers who were left are now gone.

The country needs a uniform GROSS fee in tariff, like France, to create the proper settings for a sunrise industry. It MUST be enshrined in legislation nationally otherwise we are just talking greenwash and hot air. On a bigger scale, there is a simple mechanism that would assist - a bit like the completion guarantee for a film. Indemnify the companies that would build bigger solar plants. The money is out there.

Frankly, Australia is not even in the race anymore and to even contemplate that K. Rudd would change that is wishful thinking only.

In Ontario Canada, our provincial gov has take a lead in promoting "green" energy. Last May they passed the Ontario Energy Act.

I live in an island county on the eastern end of Lake Ontario, with excellent wind potential. However, a very strong well-financed NIMBY lobby has, to date, prevented wind-farm developers from becoming established here. I'm co-chair of a local group called, the County Sustainability Group, and we have written an essay to rebut the NIMBYists, and to elaborate on why their disinformation holds appeals to many in the general public. You can see this essay
here.

At the home owner level, the FIT provides great incentive for rooftop or backyard wind or solar, up to 10 kw. For example, it gives a 20 year contract for solar energy paying about 6 times the home owners cost from energy from the grid. Buy low, sell high – it should work! ROInvestment should be over 10%/year, significantly better than money invested anywhere else these days. I have recently had a contract proposal accepted and am currently working on getting a 10kw system system in place.

Of interest might be the Ontario hourly energy that provides our grid.
Details here
The CANDO reactor chug along providing almost half of our energy with the other large contributor hydro, especially the Beck generators at Niagara Falls.

I just had a 2.08 KW solar PV system installed on a shed i built for the purpose in New York State.
We qualified for a New York State rebate of $4. per watt (this has since been lowered to $2.50 per watt.)

We were required to use a "professional" installer approved by NYSERDA (NY Energy Authority) to receive the rebate.

Between a labor charge of $2,000 for about 40 hours of work, and hidden mark-ups of about $5 - 6 K, the entire rebate went to the installer, who made out like a bandit. We could have purchased the materials, (10 Sharp panels, 216's rather than the 208's we got , a Sunnyboy SMA3000 US inverter, and a rail mounting system) in the competitive marketplace from a supplier like Solar Electric Supply in California, for LESS than we paid after the rebate!

The rebate system as it currently exists in NY is a rip off, basically a welfare program for approved installers, and does little or nothing to encourage more people to go Solar.

Most of the work of installing a PV system involves knowing how to operate a ladder, and basic electricity. The rebate system needs to be re-oriented towards allowing the do it yourselfer to take advantage of it, and the greed of professional installers needs to be capped. Of course, as in any electrical project, there must be rigorous safety inspection.

But as marginal as the financial payback is for photovoltaic, the current rebate system is a killer for anyone but the true solar fanatic.

In general, cut down

76 MW is the peak power of the installed panels under full summer midday sun.
Most of the time the panels will produce a lot less than that.
Customers actually consume energy, not power.
In Queensland the average household uses at an average rate of 21 KW.h per day.
But they don't use it at a continuous rate of ( 21 / 24 ) KW, nor at the rate at which the solar panels supply it (mostly around midday).
So the solar farm must be connected into an electrical grid that has sufficient generating capacity of other kinds to be able to match supply to demand.

While it is important to know the peak power, so that electrical equipment can be sized to cater for full load, what is also important is the KW.h produced each hour over the day and over days at different times of year.

As well as being weaker in winter, when the sun is lower in the sky, and the days are shorter, there is also the interruption of clouds. As solar becomes a larger proportion of the national energy mix, the "matching" capacity must get larger to cover for the cloudy days and cloudy hours.

Coal and nuclear cannot do this matching capacity job because they are very slow to change their output.
Wind can't do it either, because it also is variable.
Hydro is good, but good locations are few and far between.
Gas is OK, but it is wasteful to keep it "ready to go" - it might be economically OK because the grid controller will pay highly for matching capacity, but it is poor from the GW viewpoint to have gas running at night and gas spinning in reserve during the day.

And the solution is ...
there is no good solution.
Cut down.

Candobetter invites people to describe their experiences in different places.

[2] Note that France is not intentionally growing its population, which is projected to fall after the deaths of the 'baby-boomer' bubble, over a period extending between around 2010 and 2060. Only the English-speaking polities are currently afflicted by their property development magnates with a populate and perish democratic opposition mentality. See more on The Growth Lobby

I believe that solar panels are an excellent way to provide clean, green and renewable energy to power a wide variety of devices. The power from solar panels is strong, reliable and easy to maintain. And on top of that it is also good for our environment. So it is awesome to see that Toyota is taking this initiative. Editorial comment: This comes very close to being an advertisement.

Making A Solar Panel At Home Is Not To Difficult If You Follow The Right Steps. You Can Find a DVD Instruction Manual Here On How To Make A Solar Panel. www.solarcentresuk.com Editorial comment: This comment would be considered by most to be an advertisement, although for a product that is likely to be of interest to some readers of this page.