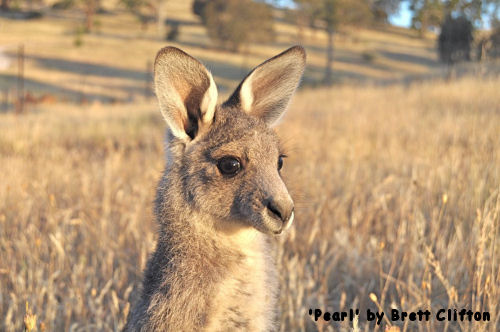 Levels of fluoride dust from a brick factory at Craigieburn and the Alcoa aluminium smelting plant near Portland are proving fatal to kangaroos. DSE was informed of the problem in 2008 and the EPA was told in 2005, but signs of fluoride-related symptoms in kangaroos were noted as early as 2001. We know we cannot rely on the DSE's wildlife statistics and most of us have heard that the EPA is a toothless tiger, but how many of us would have thought there was enough fluoride dust out there to kill herds of kangaroos? Where does that put humans, especially children?

Our kangaroos are dying of fluoride poisoning in Victoria

Deborah Gough's article, "Roos victims of factory fluoride," February 21, 2010 The Age:http://www.theage.com.au/victoria/roos-victims-of-factory-fluoride-20100220-oms2.html reveals a nightmare. The article merits ongoing discussion so that the information does not perish with the fish and chips wrapping.

If, like me, you were confident that Australian governments were able to judge safe levels of fluoride in water, you may wish to review your opinion now. Although the Age article is about levels of fluoride dust from brick factories and the Alcoa aluminium smelting plant near Portland, causing deaths in wildlife - and you may not be wildlife - the level of incompetence in environmental 'regulation' and waste 'management' here seems quite alarming. The degree of poisoning is awful. Why would anyone believe that with such incompetence and callousness prevailing in Victorian government and business that humans in Victoria were safe?

According to The Age in Victoria:

The Alcoa smelter in Portland emits 120 tonnes of fluoride dust a year
Austral Bricks in Craigieburn emits 60 tonnes a year
Melbourne Water emits more fluoride than any other agent overall.

The Age gives its source as the National Pollutant Inventory.

Responding to inquiries about the fluoride poison-related deaths of many kangaroos in the Portland and Craigieburn areas,


"EPA director of environmental services Bruce Dawson denied the authority had been slow to reduce maximum emission levels. He said that while the levels were safe for humans, it was now clear they were too high for some animals and a new level was likely."

According to this Age article, Wildlife Victoria had told the Department of Sustainability about the problem of fluoride emissions and kangaroos in 2008! The EPA had been told about it in 2005. Signs of fluoride-related poisoning in kangaroos were noted as early as 2001.

Sounds like the Department of Sustainability ignored this alert too, or, even worse, culled and disposed of the signs or allowed someone else to do so.

The situation for the kangaroos seems so severe that I cannot find words to say how it makes me think of my government and the industries emitting these toxins. If people have knowingly allowed this to happen then they are inhuman.

"Scores of starving and pain-ridden kangaroos have been culled after developing tooth and bone deformities from breathing and ingesting fluoride emissions. Many more are believed to be suffering from growths that will kill them. The affected kangaroos are living near the Alcoa aluminium smelter in Portland, in the state's south-west, and the Austral Bricks factory at Craigieburn."

Mr Dawson (EPA Director of Environmental Services) said the EPA had demanded that Austral ''significantly reduce'' its fluoride emissions by building new facilities and upgrading technologies, but neither it nor Alcoa were 'in breach' of regulations. Obviously the regulations are hopeless.

Dawson said the levels were safe for humans.

There is actually a lot of doubt about what constitutes safe levels of fluoride over time and it is hard to have faith in such pronouncements, especially for babies and children, when authorities in Melbourne were able to ignore or not able to understand that the fluoride levels were so dangerous as to be causing tooth deformities in kangaroos so that they were starving and moved painfully.

"Autopsies performed at Melbourne University on 49 kangaroos culled at Alcoa on a single day last year found all but one were suffering from fluorosis, which leads to excessive bone growths, or lesions, on joints in the paws, ankles and calves. It can also cause tooth and jaw deformities that hinder eating and foraging."

Alcoa has been in the business of managing fluoride for a long time. How come it isn't aware of its toxicity in all conditions by now?

And, apparently culling of the kangaroos has been going on quietly, presumably with government permission.

The Sunday Age has been told more than 200 ill kangaroos living near both affected sites have been culled in recent years, but this figure could not be confirmed

This time the culling may have prevented the alarm being raised sooner. The recent Auditor General's report is evidence that the Department of Sustainability has been issuing licenses to cull kangaroos and other wildlife without any reliable wildlife statistics. Have ill-advised kangaroo culls in the area also disguised what must be a high mortality rate in these animals from poisoning? In other words, is this another flow-on from the Victorian Government's failure to monitor the welfare and population dynamics of our wildlife?

Perhaps those 'nuts' who resisted fluoridation of Queensland's water recently were right after all. One certainly cannot ignore the fact that there is little evidence for fluoridation of water supplies and quite a bit contradicting its supposed benefits for teeth.

From this poisoning epidemic we should derive the lesson that our living environment, those species that share this world with us are like us. If they suffer, we are likely to suffer. If we ignore their suffering we may well be turning our backs on clear warnings about our own predicament.

Our predicament is not the poisoned environment alone, it is also our helplessness to treat our fellow creatures decently because of the wall of obscure regulations and power thrown up by our commercial-in-confidence-government. A society which allows other creatures to be dispossessed and herded into toxic land then culled and disposed of with no public outcry is depraved.

Without getting to the thorough medical research, one would like to ask the question: "If poisoned kangaroos are murdered for their flesh, would it not affect humans who consume it?"

Population stability advocates against poisoning ourselves?

Subject was: Reply to Teresa - JS This site promotes the reduction of human beings on the planet so isn't poisoning ourselves a good thing?

Stable population is not about genocide

Advocating for population stability is not about endorsing deaths, poisonings, euthanasia, abortion, genocide, etc. It is about the human species learning to adapt to environmental limitations - a skill that we as a species haven't naturally acquired through evolution. Without prey, being powerful, and being on top of the food chain, means that it has always been assumed that we humans can just keep spreading across the surface of the planet - i.e. conquer new worlds, find new colonies, make new civilisations, manipulate the environment, manipulate and destroy other species, immigrate to new countries and continue to spread. However, this can't continue. With our population predicted to blow out at over 9 billion people by 2050, "sustainability" is being stretched and our environments are under stress. There has always been money to be made by growth, and the lure of continual economic growth through population growth has made many people wealthy. However, our leaders and economists are under the illusion that growth can be forced to continue forever, and the herd can just keep growing! We must limit our reproduction, and immigration. This is the route to population stability, not by allowing suffering or deaths from poison, or genocide!

Limiting reproduction and immigration won't work. It will never happen. Anyone who thinks that without war, disease and famine the population will stabilize is living in fairyland.

Stability is the Rule. Growth is an aberration.

Stability is the Rule. Growth is an aberration. Until the 18th century most populations in the world were stable and many had been stable for a very long time. In the case of the Polynesians and micronesians in the Pacific, it seems to have been the rule that populations remained stable for many thousands of years - perhaps as long as around 40,000 in the case of some micronesians and Australian aboriginal stock. Western continental Europe has slowed down its population growth without incident since 1973. Different land-use planning system (notably with different inheritance systems) that treats population growth for the cost in energy and materials that it is. Mostly it is only the countries which inherited their systems from the anglophone countries, typically through colonisation, which are in trouble. That includes Britain, Australia, Canada and America, and India and Africa. Our system externalises the costs and treats them as profits. Barmy system with barmy results, a barmy ideology and completely brainwashed citizens. It is obscene that Australia pretends it has the skills to help stop overpopulation in the Pacific Islands. We only make it worse, like the British who started it. In Japanese Pacific Islands, they try to encourage Japanese people to migrate there to keep up the populations. They are not overpopulated - except the ones that the US won during WW2. French Pacific Islands are also not overpopulated like the ones that were colonised by the British. The Dutch managed to overpopulate quite early and their system came from the same early origins as the British one, although the British got theirs via the Normans, who practised the viking system among nobles in France where they had come in the 9th Century. Normandy came to conform to the whole roman-based system in the 19th C along with the introduction of the Napoleonic code. I think I probably know a lot more about this subject than most people. I don't mean to sound arrogant, but it is amazing how few actually want to know how things work - even professionals in the area, who continue the same old saw about the benign fertility transition and go round trashing perfectly good societies by privatising land as in New Guinea or Thailand, among the Karen etc. But there is another way... as I said above. Sheila Newman, population sociologist home page Copyright to the author. Please contact sheila [AT] candobetter org or the editor if you wish to make substantial reproduction or republish.

It is interesting that Alcoa released a long term management plan for fluoride emissions a couple of days before this story hit the news. In this statement Alcoa declare that they are "deeply concerned by the potential for low level emissions to affect the health of any animal grazing close to the smelter and will look for further improvement opportunities". They also boast that Portland Aluminium is one of the lowest fluoride-emitting smelters in the world. Of course no mention is made of the 49 kangaroos shot in one day last year of which 48 showed signs of fluorosis let alone the reported 200 that have been culled in recent years. Keep in mind there are only 130 kangaroos on the site (of which 90% are showing signs of fluorosis). There is also no mention in this statement of the 17 kangaroos that were shot during a study which concluded that the lesions observed were consistent with a diagnosis of fluorosis. This study by Emily Clarke was presented at a wildlife disease conference in 2003. I would suspect Alcoa knew of these findings when the study was done as fluoride expert John Hill, an Alcoa employee assisted in the study. The discussion in this study also states that the herd of cattle Alcoa maintain around the smelter are actually there for the purpose of monitoring fluoride emissions, it then suggests that eastern grey kangaroos might be a more useful indicator species for this purpose ! Here's a link for the study.