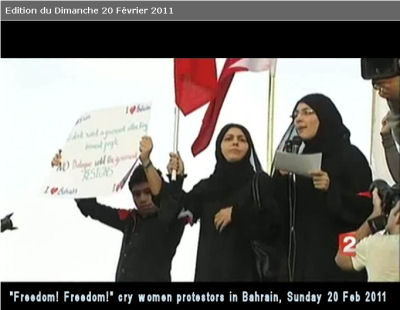 High on the list of causes of the Bahrain situation is mass immigration and related loss of indigenous political representation. Old British colonies and protectorates, notably the commodity economies of Australia and Canada, as well as the UK and the US should take heed. 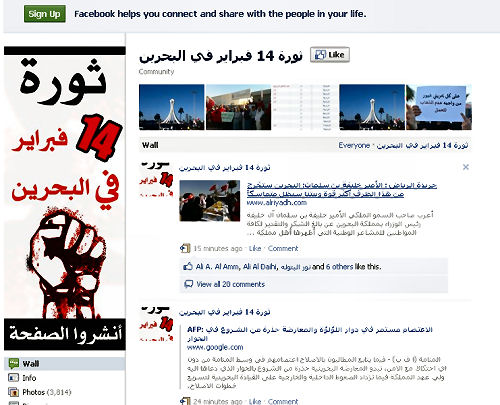 On Friday 14th people in Bahrain rallied to a message in Facebook calling for "The Revolution on February 14 in Bahrain."

When they gathered in the streets the revolutionaries were savagely repressed by the police and the army. The opposition MP, Ali al-Aswad, said that Bahraini security forces, many of whom are recruited from Asian countries, had on Friday fired live bullets at more than one thousand people, who were trying to return to protests at Pearl Square. Nearly 100 were killed.

It seems that Bahrain unions then called for a National General strike, sheduled from Sunday. The Bahrain prince, Salman bin Hamad al-Khalifa, in order to avert riots, asked the army to allow people to gather in public places and express their political demands. The prince promised to listen to all the demands.

On Sunday a crowd of protesters gathered in the Pearl Square, Manama, to hear the opposition speak. The crowd was divided into men on one side and black-burka-swathed women on the other. Both sides had speakers and the crowds were noisy and animated. They called upon the Prime Minister, who is also the uncle of the King, to resign. He has been Prime Minister for 40 years. A man in the crowd told France 2 news that the King, Sheikh Hamad bin Isa Al Khalifa, and the Prince still have a chance, but they need to reform quickly.

Shiites led the revolt, saying that they have been marginalised for years by powerful Sunni interests. The situation is not so simple, however.

They complained that the Prime Minister affects local politics and power by importing Jordanian, Syrian, and Egyptian immigrants and making them citizens, depriving the local Shi'ites of work and diluting their political participation. In the square people held up photos of the bullet riddled bodies of people they claimed were victims of the hated regime. According to"Royals seek dialogue as protesters press demands,"[1] the people are calling for a "real constitutional monarchy."

The crowds may have been encouraged by the removal on February 11 of the long-standing Egyptian president Hosni Mubarak.

Bahrain is a small but strategic kingdom, once under British rule and a military outpost of the USA, which headquarters its 5th fleet there. All foreign powers since the times of the Portuguese slavers in the 14th C, have used an immigrant-composed caste system to repress the local people, who originated from the Arabian Peninsula and Iran.

According to Samah Soula, the France2 French News commentator, "More than anything the Bahrainis distrust the influence of their neighbour, Iran."

The US has a military outpost there, where it headquarters its 5th fleet, and has a huge interest in (the ruling) Al Khalifa family, according to Steven Sotloft.[2] The King of Bahrain relies on the US to provide insurance against Iran, which historically ruled Bahrain until the 1830s, when Bahrain became a British Protectorate, until 1971, when Bahrain became 'independent', along with many other oil-rich states at the time of the first oil shock. The US is likely therefore to undermine attempts to gain democracy for the people of Bahrain.[2]

According to some sources, if there were to be a democracy, the Shi'ite majority would reverse the current Sunni rule because a 70% majority of the indigenous population is Shi'ite. However, the situation is not just an 'ethnic quarrel' because the Shiites are actually supported by a lot of young Sunnis. This situation shows that the forces for reform are less religious than indigenous-citizen-led against domination by immigrants and foreign nationals for the ruling elites. It seems to be a youth-based movement of people in precarious economic situations who realise that the ruling class preference for immigrant labour is taking jobs which they would otherwise do and, at the same time, affecting their rights as citizens by strategically weighting elite political forces in the country.

For instance, the security forces are composed predominantly of foreign recruits who remain in the country because of excellent career opportunities and affordable housing, in which they are given massive preference over Shiites, who form only 3-5% of recruits. The immigrant-predominance in Bahrain's security forces make them a tool of the elites because the immigrant Bahrainis realise that their jobs and housing and welfare depend on the current political elite. The security forces cannot therefore be on the side of the citizenry. Nor can the US military. So if real democracy comes in, that means big changes for the composition of power and ethnicity and the influence of foreign power, which has been used abusively against the locals.[3]

The Saudis also have huge interests in shoring up the Bahrain status-quo. They have agreements to pump oil from Bahrain. They are in a vulnerable situation now that the Saudi supportive regime in Egypt has fallen.[3]

What kind of democratic institution should the Bahrainis go for?

The demands in Bahrain for Representative Monarchy evoke the constitutional demands at the beginning of the French Revolution, which began legally with a similar administration in mind (following events in Britain), until King Louis the 16th reneged on the agreement and launched royal troops on Paris. In fact the French finished up with something far better than a constitutional Monarchy. Their republic and their civil code (introduced by Napoleon) remain the model for most of Europe. Interalia, it would be a great pity for Europe and the rest of the world if the US, Vatican and Sarkosian forces may be wearing down that consciousness. A constitutional monarchy has not allowed the people of Britain a voice against a massive importation of immigrant labour and public housing occupants. Nor has the similarly constituted parliamentary democracy in Australia and Canada prevented Australians and Canadians from similar political and economic manipulation of immigration by powerful elites.

Other commodity economies with high rates of immigration should take heed

Like Australia and Canada, Bahrain, although it is small, has a major population problem due to massive immigration. 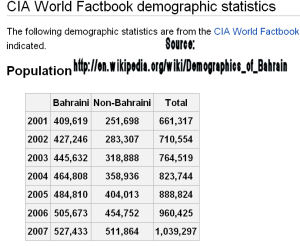 Although Bahrain is oil-rich, foreign investors and foreign elites, in which Britain and the US, along with the Saudis and others, are prominent, have enriched themselves at the expense of the local population. They were only able to do this by overwhelming local democracy through propaganda and high immigration, then raising the rights of immigrants over those of locals. Australia and Canada, which have strategic mineral wealth, should take heed, because their elites (including corporate-based powers in newspaper and the property and mining industries) are also promoting high immigration, and selling off property to moneyed foreign elites.

The multicultural-based populations of Australia and Canada need to join together, as have the Sunnis and the Shi'ites in Bahrain to demand a functional democracy.

[2] "If you look at the WikiLeaks cables, the king of Bahrain is recorded as saying “Iran must be stopped”. The king of Bahrain is the number one advocate of US strikes on Iran. He is so scared of Iran. Keep in mind Bahrain was a part of Iran in the Safavid dynasty [which ruled Persia from 1501 to 1736]. In the 1830s, the Al Khalifa family signed the first of many treaties establishing Bahrain as a British Protectorate. In 1971, Bahrainis voted for independence. They wanted their own state." Source: Interview with Steven Sotloff, "Big powers warily eye revolt in the world's smallest Arab nation,"

From article, Bahrain: Washington and London Endorse Dialogue With Tyrants, War Criminals and Torturers of 20 July 2011 by Finian Cunningham on Global Research:

Efforts by the US and British-backed Bahraini regime to repair its international image over human rights violations are in tatters with the revelation that senior members of the oil kingdom’s royal family have been personally involved in torturing hundreds of civilian detainees, including doctors and nurses.

One of the torturers-in-chief is Captain Nasser Al Khalifa, son of the king. He graduated this year “with honours” from the US Marine Corps University at Qantico, Washington.

This criminal rule by inner-circle members of the House of Al Khalifa also exposes Washington and London’s efforts to positively talk up reforms and dialogue by their Persian Gulf ally as a cynical sham. In Libya and Syria, war and sanctions are declared against alleged human rights abusers. But in Bahrain, Washington and London say pro-democracy protesters must embrace the rulers’ so-called initiative for national dialogue.

Revelations of royal family brutality in Bahrain also make a mockery of King Hamad’s announcement last month of an “independent” human rights probe into violations that took place during the Western-backed Saudi-led military invasion of the oil-rich kingdom earlier this year.

Yet again Washington and London had trumpeted this move as a positive step to reform in the Gulf kingdom, where a minority unelected Sunni elite has ruled over a majority Shia population for 40 years since nominal independence from Britain in 1971.