The Age is a constant source of propaganda for population growth in Melbourne. Jake Niall's article today is another flagrant example. Melbournians need strong minds and hearts to fight back against their runaway parliaments and reclaim their natural rights to self-government. 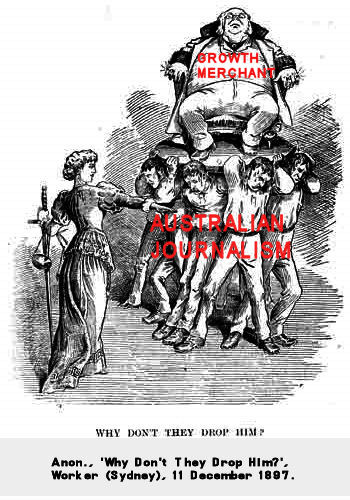 Age Sports-writer Jake Niall promotes the thinnest of arguments for overpopulating Melbourne as if they had real authority, on behalf of The Age, Melbourne's newspaper for the middle classes. The Age owns a massive international property dot com and represents a moneyed power-elite that relies on overpopulating Melbourne against residents' and electors' wishes and all commonsense. Its role seems to be to suppress protest through the massive weight of continuous propaganda, whilst maintaining a thin pretence of counterbalance by publishing mildly dissenting letters to the editor from time to time.

Whilst insulting Melburnians' intelligence, in "Big Melbourne isn't to be feared, you might find it'll grow on you," (April 23, 2011, The Age), Jake Niall nonetheless adds to the crushing weight of commercially backed propaganda. Presumably this is how awful power-elites like the Nazis eventually overrode all objections and hypnotised a confused public as they harnassed the masses to their big-business-backed tyranny.

Melbournians need strong minds and stomachs to survive this assault on their democracy and community long term, but survive and defend themselves and the truth, they must. If they do not there is nothing to stop Melbourne (and every other green bit of Australia) from becoming like Hong Kong or coastal China. There is actually no end to how bad it can get. Residents groups in Hong Kong now lie down in front of bulldozers merely to protect their high-rises from shadow.

We must not forget the history of our leaders' and press's machinations against our collective welfare. Lest we fall weakly for the various excuses that their representatives trot out.

Niall describes Melbourne's growth as 'unexpected' when it was solicited and promoted by the Kennett government and Bracks governments, then shamelessly continued by the Brumby. The Australian and The Age were involved hands-on in the population growth promotion and constant marketing of lame defenses for growth as if they had substance for anyone but anti-social land-speculators. (See chapter 6 of The Growth lobby and its Absence for the history.) The Victorian government, under Bracks, relied on unsavory business characters to market this growth, notably Steve Vizard and Richard Pratt, who were involved with APop and OzPop and US housing investment promoters.

No way was Melbourne's growth unexpected. This is marketing to deflect responsibility away from the perpetrators of a heinous affront to democracy by successive Victorian parliaments. Let us not forget, either, that neither the Socialist Alliance, nor the Greens, stood up for peoples' rights. These smaller parties have participated in the cover-up, along with the newspapers, which benefit financially through their corporate (housing, building materials etc) investments and ability to manipulate perception of market performance.

Our system needs to change and we might start by looking at the Napoleonic system that Europe has inherited, where democracy is somewhat more robust and population growth is treated as a cost, rather than have its profits artificially isolated from its impacts and costs (which the rest of us pay).

The title of the article is "Big Melbourne isn't to be feared" but the infamous Bernard Salt is quoted within it in support of Big M saying that the "Adelaidification of Melbourne" (not so fast gowing Melbourne ) is a "frightening prospect" The author of the article certainly isn't frightened of using the word "frightend" as a weapon against the citizens of Melbourne, accusing them of being so, but it is apparently quite OK and cool in the eyes of the author (or did he not notice)?) for Bernard Salt to say he is frightend of growth slowing. No problem about a rather irrelavent lashng of "boat people' at the end either to complete the messy stew dished up to The Age readers today by the sports writer, Jake Niall.

Why no data or facts to show 'benefits' of population growth?

Thanks, Sheila, for drawing our attention to this astonishing article. How any professional editor would have seen any value in Niall's piece is a mystery to me. It is no more than value judgement without any data, facts or logic to back it up. Does Niall seriously expect us to believe that Melburnians of the 1990's would have thrown away housing affordability, open spaces and relatively uncongested roads in return for the allegedly more interesting food choices of today? I somehow doubt if hundreds of thousands of Melburnians struggling with acute accommodation stress, cost of living increases and longer working hours and commuting times would see the "sexiness" that he and Bernard Salt claim to see in Melbourne in 2011.

Why maximise our population?

Why allow populations to maximise anyway? What is the advantage of allowing humanity to reach the brim of our “carrying capacity”? Surely when it comes to consumption and resources, conservative numbers is to our advantage. The planet Earth is not just humans. We share this planet with thousands of species, and their decline is due to human numbers and expansions. Surely balanced ecosystems are better than human numbers pushed to the limit, eliminating other sentient creatures? Each species help preserve and ensure ecosystems are healthy and functioning. Animals can’t evolve fast enough against human aggression. It’ s not only about ethics, conservation and conservatism, but maximising human numbers makes us vulnerable to resource declines, the energy crisis, shortages of potable water, natural disasters and climate change. What’s the point of more people except to defy reality and continue the status quo of growth and more growth as if we were still a great "empty" sunlit land of expansive horizons? Surely we in Australia, in Melbourne, can achieve what we want to achieve with our present numbers without adding millions more people to Melbourne? Our city was not designed to be a monolith. It would mean re-engineering our whole shape and infrastructure. The costs and upheaval will be tremendous. Why go down that route? The addiction to a misanthropic economic model based on perpetual growth is one that needs to be challenged in light of our energy crisis, our declining natural resources, natural disasters and climate change. The "business as usual" model should assigned into the dustbins of history. We need an economic model based on survival, sustainability and equilibrium with available resource declines.

Hi, I'm always grateful to see people such as yourself voicing what to me is obviously the most important issue we face. We need to stabilise our population at no more than our current level. I just thought you might be interested in knowing we have a couple of parties emerging with this as their primary agenda. I am a member of the 2nd one who currently are offering free membership but the top one is larger and so has a stronger base. Joining either of these and voting this way is a good way to get this message across to the major parties - they need to listen to this. Carbon tax is a crock and not a solution - just another dumb idea that the less informed less intelligent think will solve the problem. It's about finding a balance between population size and lifestyle - currently, any increase in population means sacrificing lifestyle not to mention native wildlife and farmland which we do so at our increased peril. We need to change our economy to work with a stable population base and push our governments and businesses to take actual action in working within our land's ability to clean itself and stop the lies regarding aging population and other rubbish they spew. Here's the groups: http://www.populationparty.com http://www.stoppopulationgrowthnow.com regards Matt

What can Big M achieve?

What's good for a growth-based economy is not in our interests. There are times when growth in human numbers is convenient and necessary to build up an economy of scale, to create a feasible and coherent society and justify infrastructure investments. However, continuing on the route to endless growth is akin to obesity, and cancer. Growth over an optimum size means massive costs to re-engineer our city, outstripping current funding. What would a bigger Melbourne, a Big M, achieve that can't already be achieved? What's to be gained? It's all about those in power making more wealth form property development, and more mega-stores growing and maintaining a bigger customer base. It's not for the benefit of us, the average people, but the elite who will be shielded from the negative impacts due to their wealth. An economy based on perpetual growth and consumption has a limited time-frame, and is inherently fatalistic. It means that our collective human mass will end up a creating destructive monolithic top-heavy mega cities, with an appetite greater than what an economy or Nature can feed it. A sports writer would know that too many team-members would cause chaos and mayhem, not a unified and focused team optimised to win!

It is not the size of Melbourne that concerns the growth boosters. The percentage growth per annum is all the care about, and they want this maintained forever. But simple logic says that this has to stop. All population growth will stop. The author says: "when they well know that Australia, as a nation of 22 million almost the geographic size of the United States, can accommodate many millions more without trashing living standards." Maybe, maybe not (well probably not). But what happens when these many extra millions are added? And it won't take long at 1.5-2% growth rate. What happens when we reach 35 or 50 million? Of course these growth boosters will then be cheering us on towards 100 million (and if we ever reach that then towards 200 million, and so on). Of course he reveals his true colors when he writes: "Indeed, population growth has underwritten our prosperity" Yes the percentage growth, not the absolute numbers. But the growth will end. Inevitably. Anyone who isn't a brainwashed growth booster can see that. Knowing that the end of growth is inevitable we can prepare for it now on our own terms, or continue as we are and have it thrust upon us. And as a distraction he adds: "There is a compelling humanitarian case, too, for good global citizens to share their abundance." The number of poor immigrants allowed into Australia is very limited. Almost all are comfortably middle or upper class.

If you surveyed ordinary

If you surveyed ordinary people and said "listen, we've got this great policy with really important features: (a) traffic will be gridlocked; (b) Melbourne will be balkanised like Sydney because crossing town will be almost an impossibility; (c) you will add an hour in daily travel to work time, see the kids and wife less; (d) rents will keep rising and your disposable income for enjoying life shrink further to feed the property owning class or your mortgage; (e) the city will fill up with people with whom you share virtually nothing in common (in fact one nationality have been our enemy for about 50 years) increasing the alienation that cities generally struggle with; (f) a new slave class of illegal immigrants will form the backbone of a new criminal underworld, employers breaking the law using them - avoiding paying them proper benefits and generally preferring them over locals for whom such benefits are a right, landlords breaking the law housing them 3 to a room etc (g) queues for everything from child care to private schools, univesities will massively lengthen; (h) your heritage of a well heeled infrastructure carefully planned and paid for by dilligent people over generations will substantially erode; what do you think they would say ?