"I am just amazed at the breadth and the depth of interest and knowledge about planning in groups like this, so I don't understand - given that - how the government gets away with what it does."(Prof. Michael Buxton)

Metropolitan Planning Strategy for Melbourne - Con Job or for Real?

In contrast to the arrogant demeanor of the panel at the Wheeler Center (described at "We REALLY need to talk about Melbourne Planning ..."), Michael Buxton addressed an audience of activists and concerned public from Defenders of Public Lands Victoria and stated:

"Looking at some of the faces here, lots of you know a lot about the Metropolitan Strategy as it exists, and have done lots of work in planning. So I am just amazed at the breadth and the depth of interest and knowledge about planning in groups like this, so I don't understand - given that - how the government gets away with what it does. There is kind of something wrong in the way we all collaborate and mobilize, and I don't know how to get around that because the development community is brilliant at getting around it. It has its paid 'peak groups', like the Property Council, the Urban Development Institute. And they lobby and they walk into the Premier's office - and you all go and do it, you know, going up to Canberra in your own time - it's so much harder for you. But, somehow, keep at it, because it's incredibly important."

Signs of Growth Lobby infiltration in audience at this meeting?

At this otherwise excellent meeting, conducted by courageous members of Protectors of Public Lands Victoria Inc., it seemed that pro-development people may have secreted themselves in the audience to quell attempts to address the problem of the Victorian Government's promotion of high immigration by making it sound as if talking about immigration numbers was somehow indecent. It isn't. The government, the mainstream media, and the property development lobby never stop talking about it. It is out there in the public domain. It is core political business. Two people seem to have led this muzzling from the audience, which, sadly, appeared to be successfully intimidated or confused as to what was wanted of them.

There could be another explanation as well - that people have become confused by ambiguous media coverage of Dutch MP Geert Wilders' visit and now fear that criticism of any immigration will stigmatize them. The Growth Lobby, which owns and runs Australian public and commercial media, is easily able to ensure that coverage of such events benefits their cause. The aim is to restigmatize criticism of high immigration numbers by confusing it with criticism about ethnicity. This needs to be sorted out, pronto.

How come business, media and government can rabbit on continuously about immigration but 'we' can't?

As Michael Buxton says in his videoed speech (cited above), "there seems to be something wrong in the way we collaborate and organize." What is glaringly wrong is that the growth lobby members, including the government, the mainstream media, and the property development lobby, all talk non-stop about immigration and population growth but still manage to make enough citizens feel that they have no right to do so, thus totally undermining every effort to stop overpopulation and overdevelopment. There is something very wrong when planning activist groups fail to support each other's leaders, simply caving into intimidation by faceless infiltrators. Factionalisation of planning activist groups, with some cliques doing deals with government and purporting to represent the wider majority, whilst selling others down the river, is just what the government and the developer groups want. Our environment and democracy is too important to be sacrificed for narrow political ambition. 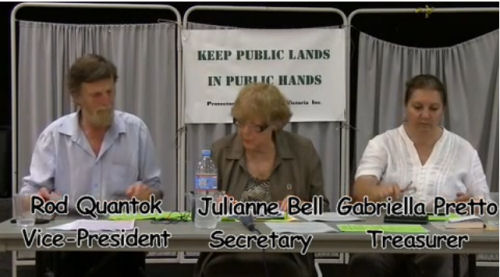 At the Annual General Meeting of Protectors of Public Lands Victoria Inc. held on 23 February 2013 at the Flemington Community Centre in Flemington the Metropolitan Planning Strategy for Melbourne (MPSM) was considered and discussed. It was moved that the resolution of this meeting be sent as a submission to the Planning Minister and the Ministerial Advisory Committee on MPSM. Here is the resolution:

That this meeting considers that:
1. The Metropolitan Planning Strategy for Melbourne should concentrate on maintaining and enhancing Melbourne’s liveability and sustainability, emphasizing the need to control carbon emissions, to provide for the effects of climate change, and to plan for peak oil and food security, acknowledging that social and economic well-being depend on a sustainable environment.
2. To maintain and enhance Melbourne’s livability and sustainability the following highly valued but threatened assets need better protection and expansion/enhancement:
• Public open spaces, parks, gardens
• Green wedges, including open space for environmental conservation, agriculture and recreation
• Our residential streets and suburbs
• Heritage
• Natural environment and biodiversity, urban parks and reserves, nature strips and private gardens
• Recreation and other community facilities
• Shopping centres (which are threatened by proposals to allow supermarkets in commercial and industrial centres);
3. More - and more mandatory - not less, regulation of developers is needed. (The Advisory Committee has suggested we should “move away from regulation” as the primary means of achieving planning outcomes, but we are concerned that this will disempower communities and Councils.);
4. Urban sprawl needs to be curbed with no more development in the growth corridors until adequate infrastructure is provided to service existing and proposed outer suburbs: developers should pay for infrastructure;
5. Infrastructure planning and provision should focus on improving public transport, particularly rail projects, including the lines to Rowville, Doncaster, Tullamarine and Epping and not on freeways such as the East-West Link freeway/tollway;
6. Melbourne’s green edge should be strengthened by:
• Protecting the green wedges for non-urban uses including parkland, environmental conservation and biodiversity, agriculture, recreation, open space, landscape and heritage values
• A clearly defined, permanent Urban Growth Boundary that makes clear where urban Melbourne ends and rural areas begin
• Retention of S. 173 agreements to allow Council to curb future subdivision and inappropriate uses;
7. More rigorous governance provisions are needed to prevent vested interests taking priority over the best interests of the community, including more weight to local planning schemes and a ban on political donations from developers;
8. The Planning Zones Review should be extended to allow adequate time for community consultation and for consideration to be given to curbing current discretionary uses that have been used as loopholes to allow inappropriate uses into green wedges and other zones; and
9. Protectors of Public Lands (Vic) is authorised by the meeting to write to the Minister for Planning and to the Advisory Committee for the MPSM conveying the resolution.

Resolution carried unanimously after a several amendments were made.

No recognition of population growth

The issues of Melbourne's planning paradox and the decline in standards and priorities unfortunately stayed fixed on building heights, boundaries, open spaces, green wedges and amenities. However, the "elephant in the room" of full-speed ahead population growth was hushed and thrown out as "racist" and inappropriate. None of the proposed standards of planning principles can be implemented without considering population growth! With population growth at record rates, people will spill out over the "growth boundary" and demands for housing will mean more people will be pushed up into higher density housing and towers! It's like designing an aviary and ignoring the vital factor of the number of birds that will be housed in it! Due to record levels of immigration, our population growth rate means that our total numbers will double in under 50 years. We are outstripping our existing infrastructure, and our cash-strapped State government can't afford to fund even essential services such as health care and education, but they continue to lure more people to Melbourne! Any planning strategy must consider population growth, no matter how it makes people squirm. PPL must develop their own population policy or open spaces and parklands will be encroached on by all the demands an extra 2 million, or more people, will put on them.