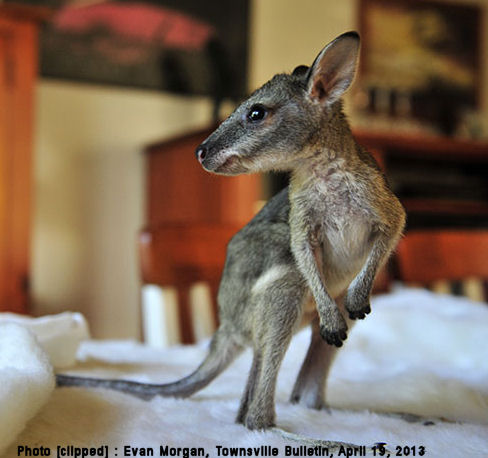 Some wildlife activists think that this very serious decision may be an overreaction to an opinion expressed by a Cr Alister Pike at a Cassowary Coast Council meeting on 28/03/13. In the minutes of the Council meeting of 28 March 2013, there is an item under general business, headed, “Problem Wallabies, South Mission Beach”. Under that heading it is recorded that,

“Cr Pike again raised concerns about Agile wallaby numbers at South Mission Beach. Cr Pike stated that there is now a risk of health issues with wallabies urinating and defecating in residents' yards where children play.

Cr Pike asked whether a provision to allow Councils to apply for damage mitigation permits to control Flying Foxes was extended to wallabies?

The CEO advised they did not and reinforced comments made at the Local Government Meeting on 22 November 2012 that the management/control of wallabies was not a Council responsibility, however Mr Brennan advised that the matter would be referred to the Coordinator Natural Environment Management with a request that he contact Queensland Parks & Wildlife Services to inform the Department of residents' concerns.” 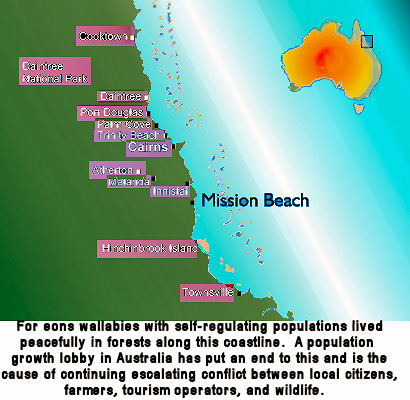 No vote by the other councilors or any motion is recorded in response to this matter.

Wildlife carers already express concern at a rise in wallaby mortality and orphans in the area, associated with forest clearing causing wallabies to be homeless, without shelter and exposed to traffic.

“Approximately thirty (30) Agile Wallabies are killed on Mission Beach roads and at least five (5) are killed by dogs per week. Isn’t this enough of a cull? More than 1,800 signatures (local and worldwide) on the petition against the cull demonstrates the public’s opposition to EHP’s (Parks & Wildlife) actions. Has every non-violent means been attempted to keep wallabies off the land (like improving and maintaining fences around the property) before the permit was issued? A Study by Simon Stirrat proved Agile Wallabies do not compete with cattle for food and that they prefer native fauna Are there other motives for the strong desire to eliminate the wallaby population in Mission Beach, such as extensive urban development?” (Nicole.)

Nicole also asks us to think of the benefits that wallabies bring to mission beach.

By attracting tourists they stimulate the local economy through an increase in occupancy rates at hotels, B&Bs, holiday homes and backpacker accommodation. They increase spending at local businesses (restaurants, shops, outdoor activities, tours, etc.). They represent a free attraction for tourists that does not need to be maintained by anyone. That is, they pay for their own food, housing, health expenses. They diversify the ecosystem by dispersing grass and plant seeds to grow rainforest. They prune and trim native bushes. They provide free natural fertilizer. The are probably a unique, new species to Australia. This status is pending studies being completed to classify the South Mission Beach Agile Wallaby.

For people wanting to know more, here is the media coverage received by the Mission Beach wallabies so far: - ABC Far North radio interview , SBS News clip, Townsville Bulletin article, and a Northern Herald article.
Concern has spread to the rest of Australia at the apparently casual and capricious decision to remove natural fauna populations from recently settled human developments in rainforest areas.

Jan Held, Secretary of the Australian Wildlife Protection Council, writes in a letter to the Minister of Department of Environment and Heritage Protection, Mr Powell:

Brutally wiping out an Australian native animal just cause some guy whinges about them?
Much of their forest habitat has been recently allowed to be cleared so they are homeless, this is why they have ventured into suburban areas. Open areas are not at all their usual habitat, they are probably even seriously disoriented when moving about trying to find their usual food and shelter.

To not have any understanding of the repercussions of removing their habitat and to then complain of their visibility is completely disgusting and inhumane.

Apparently it is widely believed by inhabitants of Mission Beach that there are only approximately 500 wallabies there.

Infant wallabies despatched inhumanely and not counted in cull

During the cull, hunters are issued permits to eliminate a specific number of animals. Part of the hunter’s Code of Practice is to kill Joeys found alive in the pouch of a shot, female Wallaby. The most common methods for killing pouched young are crushing its skull under their boot or hitting and crushing the Joey’s skull against a tree.

Agile Wallaby Joeys feed from their mothers until they are about 18 months old. When a mother with pouched young is killed, she often has an older Joey at foot for which she still provides nourishment. By killing one mother wallaby, hunters sentence three Wallabies to death. The Joeys are not included in the “count” toward the culling permit. 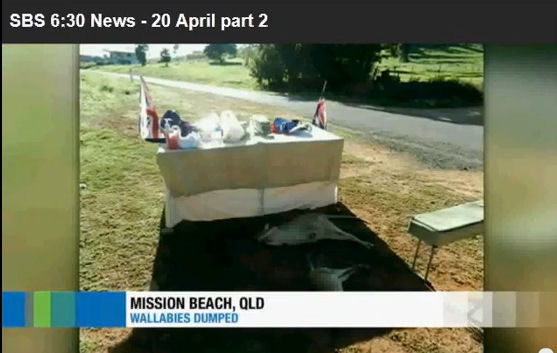 The SBS report in the video linked here shows evidence of how human expansion has caused the kind of conflict that Australians used to think only occurred in Africa and India between wildlife activists and commerce due to overpopulation.

Who exactly is responsible?

Mayor Shannon has claimed that [the cull] was initiated by the Department of Environment and Heritage Protection, but it was the Cassowary Coast Regional Council that applied for the permit to cull the Agile Wallabies at Mission Beach!

She says that she received an email from Cr Mark Nolan of the Cassowary Coast Council, stating that he has expressed his strong view that the planned cull is inappropriate in such an environment. He believes that Cr. Pike instigated the drastic action by publicly calling for a reduction in wallaby numbers. He added that Cr Pike is an enthusiastic proponent for more tourism in the area. Cr Mark Nolan saw the cull as discouraging to tourism in “sending this disgraceful image of animal culling around the globe. He wrote,

”Mission Beach is internationally known for its biodiversity, world heritage rain forest's fronting the reef and now we send this horrible message to the tourist industry!”

Jan Heald has suggested that the Department of Environment and Heritage Protection drop any plans to kill these Wallabies, as no scientific study or environmental impact evaluation was done to support this culling initiative.
In the opinion of the Australian Wildlife Protection Council, the proposed culling is unethical, unnecessary and the need for any such action is totally unsubstantiated.

How population growth & development trap us all (We are all wallabies)

Among the reports we have linked to above, one interviewee states that the reason for culling was partly due to complaints from a local farm about wallabies competing with beef cattle for food. A wildlife activist has said that the farm in question had not had cattle on it for two years. Correspondence below the article claims that cattle were there as recently as 2012.

Whatever the truths are in the detail, what we are looking at is the tragic and inevitable outcome of continuing human expansion up the North Queensland coast. The responsibility for this tragedy lies with federal, state and local governments that encourage ongoing immigration, through federal growth policy, through state government websites advertising for overseas immigrants, and through local governments giving out permits to subdivide and build. More and more frequently though, the local governments have lost the power to object to state governments pushing private developments.

Any wildlife carer, farmer, or politician that does not take on board these top-down Australian policies as major drivers of conflict and ecological disaster has their head in the sand.

This overpopulation is not inevitable in Australia. It is imposed from the top down, because of the demands of commercial lobbyists whose businesses benefit from population growth, while the rest of us all pay for it. At the bottom of the pile are the creatures of the rainforest and coastal plains. They suffer the most and have no voice except for wildlife activists, who find themselves trying to argue within the growth paradigm that we are all currently trapped within.

Native Animals shouldn't have to justify their existence

The problems of human overpopulation means mass species extinctions, pollution and environmental degradation, more competition for fewer resources. Most humans consider our species the pinnacle of evolution, our big brains rendering us capable of solving any problem. Yet this very anthropocentric attitude means we are destroying the very ecosystems that sustain our lives, not to mention the lives of every other species. With a majority of the planet's societies in the phase of dramatic population growth rates, with births outstripping deaths, some claim that we may be approaching the ecological limits of our species' numbers. Edward Wilson estimates 27,000 species are currently lost per year. By 2022, 22% of all species will be extinct if no action is taken. The animals that survive the extinction must somehow be adorable, iconic, useable, domesticated for pets, or have commercial/monetary value. Human expansion, justified under our economic growth through property developments, fool the public as they assume this will bring them prosperity and wealth for our nation. The destruction of the displaced wallabies is considered the inevitable cost of growth and progress. These wallabies at Mission Beach don't fit into the categories as worthy of being "saved" from extinction or death, and they therefore must be culled as agricultural pests or a threat to the children! Once you mention the safely to children, nobody would argue that a displaced wallaby would have more rights to safety than the children! The Greens, for all their "green" credentials, have little time for native animals, especially macropods. Without a population plan and policy for Australia except for growth and more growth, our native animals will continually be confronted by their haters and detractors, and moved to the extremes of their habitats. No native animals should have to justify their existence. However, this is what animal activists are forced to do, despite millions of years of these wallabies living harmoniousness in Australia.

Australia is a wild life tragedy

Seems that where there is wild life and too many humans there will be tragic results. Australia has wild life and a rapidly expanding population. Suburbs expand into kangaroo habitat and the kangaroos come off a very poor second best. Even if they are not shot, they are annihilated after the enormous stress trying to survive as they are progressively surrounded by traffic laden roads. It is a fast deteriorating situation for our native fauna.

Hi Viv I wish you had a better understanding of the Agile wallabies habits. They feed mostly at nite and on open plains which we provided for them. They are not a rainforest species and there is a vast amount of rainforest on these properties anyway.There has been co habitation with cattle and wallabies for the last 25+ years until Aug 2012.The wallaby numbers exploded and we eventually moved off the farm leaving it to the wallabies. The beatup about 2000 wallabies to be culled and there is a new sub species etc that make up this petition is a load of BS and is all about free advertising for Cassowary coast wildlife shelter. By the way we don't have a permit and don't know ANYONE who has one.