From 2011 to 2026 ethnic people over 80 will increase by 59% compared with 29% in the Australian-born population. The rate at which Australia's population is ageing has been accelerated by immigration. Furthermore, this effect will increase. Immigration is a major contributor to the dementing demographic. These statistics run counter to the ideology peddled by the growth lobby and its promoters should be held responsible. 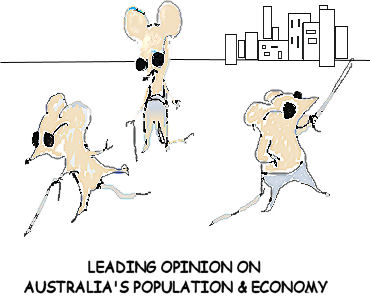 Australians have often been presented with the idea that they must submit to ever-increasing mass immigration because this will counteract our so-called 'aging population problem'.

However, a recent publication by the Federation of Ethnic Communities (FECCA) shows that immigration is actually making what might have been a mild problem because of baby-boomers much worse.

FECCA cannot be accused of anti-immigrant or even anti-immigration bias. The date of the FECCA publication was 2011, and based on data reflecting much lower immigration numbers than we have had in the past few years. The mind boggles at what the real size of the problem may be, especially if we continue with current numbers, let alone ramp them up.

Immigration and Aging in Australia - the facts

- The proportion of older foreign-born Australians has been growing more rapidly than the Australian-born population.

- By 2026 one in every four people aged over 80 will be from non-English speaking backgrounds.

Immigration and Dementia trends in Victoria

- One in four Australians with dementia is Victorian.

According to the Access Economics report (2006) one-sixth (16%) of people aged over 60 years spoke a language other than English at home,

while just over one-third (33%) of people aged over 60 years were born in a country other than Australia.

Around one in eight (12.4%) of Australians with dementia do not speak English at home.

Funding is being sought to care for non-English background people with dementia because of the growing size of the problem. It is ironic that in Victoria, where the problem is worst of all, in 2002 the Premier Steve Bracks convened Melbourne's Population Summit where he and others repeatedly justified unwanted and undemocratic plans to vastly increase immigration rates with the myth that high immigration fixes the aging population problem:

"LEADING political and business leaders have joined in a call for increased immigration into Australia in a bid to speed growth and overcome the problems of an ageing population.

Both spoke in favour of a higher population at a special conference in Melbourne, last month.

Where is this immigration ideology taking us? How can we sheet this disaster home to those responsible and make them stop increasing the environmental and social damage they have inflicted on this country?

The following links were updated on 1 December 2016:

Source of all immigration and ageing factoids and their references was, "Meant to Care," Discussion Paper, Ethnic Communities Council of Victoria, 2011, Volume 1, Number 2, p.13.
http://eccv.org.au/library/file/policy/Final_eccv_Dementia_Paper_Aug_2011.pdf. A library of earlier and later sources is at http://eccv.org.au/aged-care/aged-care-policy/

Adding more migrants to what largely is causing our "ageing population" is a Ponzi scheme. It vilifies people for the natural process of ageing, many of whom have contributed all their lives to our economy and society.

The fear of ageing is being manipulated to justify ongoing immigration. Ageing is a natural process, bar premature death. There are many snake-oil sellers out there trying to catch people's concern about ageing. They sell creams, lotions, pills - the panacea to delay the inevitable. However, we need to age with dignity and pride. As Albert Einstein said, the solution to what caused the problem can't be the same thinking that caused it in the first place!

According to a recent Grattan Institute report:

"Our analysis examines the budgets of the Commonwealth and the three largest State governments as a whole. It investigates trends over the next decade, and reveals serious pressures that put our prosperity at risk. The greatest come from sustained increases in spending, especially in health. Over the past decade health expenditure rose by over $40 billion in real terms. The ageing population was not the prime cause. Rather, people of any age saw doctors more often, had more tests and operations and took more prescription drugs..."

In other words, our economy has grown beyond its optimum size to become cumbersome, expensive, counter-productive and our health system is trying to cope with more unhealthy trends within the general public. The ageing population was not the prime cause of the health budget blowout!

Aging is not a problem if people live active productive lives for the extended period of lifespan.
Since retirement age remains around 65 in the community paid employment reduces around this age but the volunteer services to the community have increased greatly over this period in both amount and the type of service provided. This week an elderly friend took on 8 hours of work transporting frail people around Perth's largest hospital complex; others work at collecting patients and delivering them to and from the medical centre thus reducing the need for ambulance transport for low care patients.

Across the community more and more support services are being provided by volunteers.
Work is being transferred from the paid to volunteer sector. Effectively the aging are contributing to the support needed for the average time, around 2 years, of infirmity at the end of life.

Editorial comment: If the economy was run properly, and not just to serve the interests of bankers, renters, land speculators, corporate elites and other trolls under the bridge, the Government would have no trouble finding money to pay for work that must now be performed by volunteers. Also, why couldn't there be graduated retirement? Why couldn't those over 65 be allowed to work part time should they have the need to?