Mark O'Connor is running for the federal Australian Senate as a candidate of the Stable Population Party Australia (SPPA). 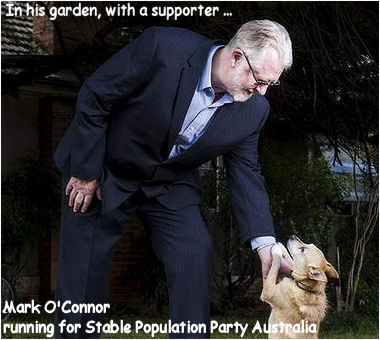 Mark O'Connor is running for the federal Australian Senate as a candidate of the Stable Population Party Australia (SPPA).

Mark O'Connor is well-known to candobetter.net and he is the co-author of Overloading Australia and a fierce and long-term advocate for keeping Australia's population small. He lives in Canberra, in a suburb by the same surname, and grows fruit trees from cuttings. Lately he has been specialising in fejoas. He is also an expert in tropical fish. Most of all, of course, he is an environmental poet, known for a slew of books of poetry and pronounced Australia's Olympic Poet by Bob Carr for the Year 2000 Olympics in Sydney Australia.

My favorite poem by him is this one, about God and a coral sea-garden, which has a rich scientific base:

God himself
having that day planted a garden
walked through it at evening and knew
that Eden was not nearly complex enough.
And he said:
"Let species swarm like solutes in a colloid.
Let there be ten thousand species of plankton
and to eat them a thousand zooplankton.
Let there be ten phyla of siphoning animals,
one phylum of finned vertebrates, from
white-tipped reef shark to long-beaked coralfish,
and to each his proper niche,
and — no Raphael, I'm not quite finished yet —
you can add seals and sea-turtles & cone-shells & penguins
(if they care) and all the good seabirds your team can devise —
oh yes, and I nearly forgot it, I want a special place
for the crabs! And now for parasites to keep
the whole system in balance, let . . ."

". . . In conclusion, I want," he said
"ten thousand mixed chains of predation —
none of your simple rabbit and coyote stuff!
This ocean shall have many mouths, many palates,
many means of ingestion. I want
a hundred ways of death, three thousand regenerations —
all in technicolor naturally. And oh yes, I nearly forgot,
we can use Eden again for the small coral cay in the center.

"So now Raphael, if you please,
just draw out and marshall these species,
and we'll plant them all out in a twelve-hectare patch."

So for five and a half days God labored
and on the seventh he donned mask and snorkel
and a pair of bright yellow flippers.

And, later, the host all peered wistfully down
through the high safety fence around Heaven
and saw God with his favorites finning slowly over the coral
in the eternal shape of a grey nurse shark,
and they saw that it was very good indeed.

You can read more about Mark on his home page.

This means that people born overseas have taken almost three quarters of net job growth, even though they make up just 31 % of the population. The myth that Australians are too "lazy" to do jobs is not justified statistically. With our government's full-throttle immigration rates, migrants are more than ready to grab jobs, over any priority to Australian-born applicants.

Most people want full time jobs, but most of the jobs gained now are part time. This twists and distorts the job statistics. People born overseas gained 97,000 more full-time jobs, while Australian-born people gained only 34,000. Priority to jobs created by our economy should be the sovereign right of Australians, but not any more.

Three in every four new jobs gained by Australian-born people have been part-time - whereas just one in four unemployed people are seeking part-time work.

According to Immigration Department figures, 125,070 temporary worker visas were issued during 2011-12 financial year - eclipsing the highest level reached during the Howard government. Why would we need to bring people in from overseas to do skilled jobs when there are good Australians that actually need a job, that are willing to be skilled up in the first place? so many foreign companies are not interested in employing Australians.

457 visa are a great idea where there is a real skill shortage in the economy, but they should not be used to replace thousands of Australian workers like what has happened in the IT industry.

I'd go further to say things like the 457 visa are the problem. Companies have developed a mentality that they deserve to have perfectly skilled and experienced workers ready to start at a moment's notice and that they are not responsible for worker training. Most job advertisements now require a minimum of two years experience, regardless of how simple the job may be. Thus those without experience are bound for permanent unemployment. When it comes to qualifications requirements are just over the top. I've seen sales jobs that require a PhD when clearly the specificity a given PhD has absolutely nothing to do with performance of the job. Its just another symptom of how corporate run our country has become. Of course overseas qualifications are much cheaper and generally of a lower standard than here but that doesn't matter as long as the correct box can be ticked. Systemic change is needed.

Editorial comment: With federal elections coming up, now is the time to ask each candidate standing for election your local House of representatives seat, whether he/she, if elected, will act to end this rort. (This great comment deserved a better title than "I'd go further to say things". I almost deleted this comment as spam.)

Subject was: Ed Im sorry to say. It makes.

Ed, I'm sorry to say. It makes no difference who is in government. They are all in this pantomime together. It has been designed to seem as if the different parties are against each other. Where in reality they are all one. It keeps the Sheeple compliant and full of hope that the next puppet will be better. But they never are. Why don't people or sheeple realise this by now?

The Australian Parliamentary system was badly damaged when the Labor Government of Gough Whitlam was overthrown in the CIA-assisted-coup of 1975, about which Christopher Boyce, amongst others, have blown the whistle.

Since that time, with the exception of the South Australian Government of the late Premier Don Dunstan, and the possible exception of the current Labor Government of Prime Minister Julia Gillard, there is little to discern state and federal Labor governments from the corresponding Liberal/Coalition governments in terms of their willingness to put the interests of the ruling global elites above the interests of their own constituents.

In "The Latham Diaries" of 2005 and, more recently, on the ABC's Q&A program (mp4 file (206M) of program of 10 June 1013 can be downloaded from this page), former Federal Labor leader Mark Latham has shown himself to have a commitment to fighting unsavoury vested interests in the Coalition parties as well as inside his own party. The fact that such a person, even with his faults and shortcomings, was able to become leader of the Federal Parliamentary Labor Party surely shows that it was likely, at that point in time, that a large number of the Federal parliamentary Labor Caucus had the best interests of their constituents at heart.

Why should we necessarily assume that a Government committed to the welfare of Australian people could could not be voted into office?

No fundamental difference between alternative governments

You can do something to influence policy. Write Reduce Immigration on your ballot papers. Your vote will be valid provided you do not obscure the numbers. For further information go to reduceimmigration.wordpress.com