This article may be seen as a follow-on from "A history of politics and population in Australia: Thomas Malthus in Australian thought". The Australian business community easily convinced itself that rapid population increase would provide a solution to all its problems, especially after the 1890s, when the property market lost momentum. By this time building societies had mushroomed and banks had begun to invest heavily in property. [1] 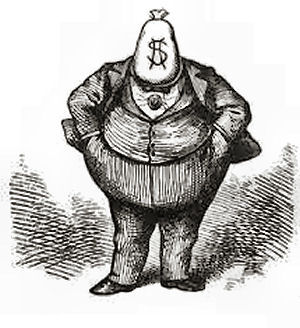 In 1893 the New South Wales bankers' Journal published an article by WH Eldred wherein one of the causes of the financial crisis was identified as "the cessation of immigration caused by the withdrawal of government aid, whereas the true policy of the country lies in encouraging population." [2] Neville Hicks [2] says that Eldred was a former bank director acting in 1893 as Consul-General for Chile in Sydney.

Other writers to the same journal made similar points: In 1898 an unidentified correspondent linked the approximately 40% population increase in the 1880s with six-fold increases in public and private borrowing. He said how much might have been reaped from this if the borrowed money had been put into 'productive works'. He felt that the consequent demand for labour would have attracted emigrants from as far away as Europe.[3] The same year the editor bemoaned the departure from Victoria of 50,000 adults in three years, which he believed, had badly affected the State's population numbers. He expressed the hope that a liberal government, a good season or two and some opening up of the backcountry would make people stay. [4]

After 1900 the business community became quite desperate about increasing population. In 1903 the President of the Sydney Chamber of Commerce announced that it is necessary to have a population "which steadily increases as commerce itself does." In 1905 the New South Wales Chamber of Manufactures supported Prime Minister Deakin's immigration proposals because

In 1906 the acting President of the Melbourne Chamber of Commerce enjoined, "an increase in population means an increase of wealth not only of the few but of the many." In 1908 the President of the Melbourne Chamber of Commerce pushed for immigration on the grounds that suitable immigrants would be consumers as well as producers and should therefore be welcomed by all classes". In 1907 the General Council of Chambers of Commerce asked the government for a steady stream of immigration to provide for the "growth in industrial manufactures which will shortly exceed the volume of consumption of the present population". In 1908 the President of the New South Wales Chamber of Manufactures stated that:

"…to get any benefits from increased protection they must get increased payment and that could not come from their own limited populations. A wisely managed scheme of immigration would be as much the saviour of the manufacturers as anything could be." [6]

(Note that the above represents an early reference to enlarging the local market of consumers.) There was much more of the same. Related demographic concerns were about population distribution, especially as regards opening up further territory for farming. There was still a perceived colonial duty to open up the land.

"Politicians, both in England and Australia, avoided discussion of this development, for, inevitable or not, an industrial dominion economy was outside the scope of the imperial purpose. The role of Australia was seen in the traditional light and the economy was to remain colonial. The growth of rural industries which would supplement the industrial might of the United Kingdom was the real task - all that was needed was men to populate Australia, money to develop it and markets in which to sell the resultant increase of primary products." [7]

We can see here that a rise in Australian anti-Malthusian thinking coincides with a rise in the financial and manufacturing side of its economic community that occurred between 1850 and 1890. In Malthus's time this was foreshadowed by the ideological and political divisions over the economic implications of the British Corn Laws between (agricultural) Landlords and Manufacturers in Britain, who tended respectively to be Malthusians and Ricardiens regarding the importation of corn. [8]

If you want to read more about this history, going up to near the present day, read Chapter 6 of Sheila Newman, The Growth Lobby and its Absence, RMIT Thesis, 2000. What you have read comes from Appendix 5, endnote 26, of that thesis.
[1] Source: Leon L'Huillier, "Depression and a National Economy," Essays in Economic History of Australia, Ed. James Griffin, Jacaranda Press, 1973, p 190.
[2] Source: WH Eldred, "The Financial Crisis" in Journal of the Bankers' Institute of N.S.W., II:7 (July 1893), p.227, cited by Neville Hicks, This Sin and Scandal, Australia's Population Debate 1891-1911, Australian National University Press, Canberra, ACT, 1978, p.86.