Two really interesting and engaging videos of "Sqwark and Whiskey playing," from Bonnie Thomson's you-tube channel. In the second one the magpie hangs onto the dog's tail in a new kind of wrestling hold. 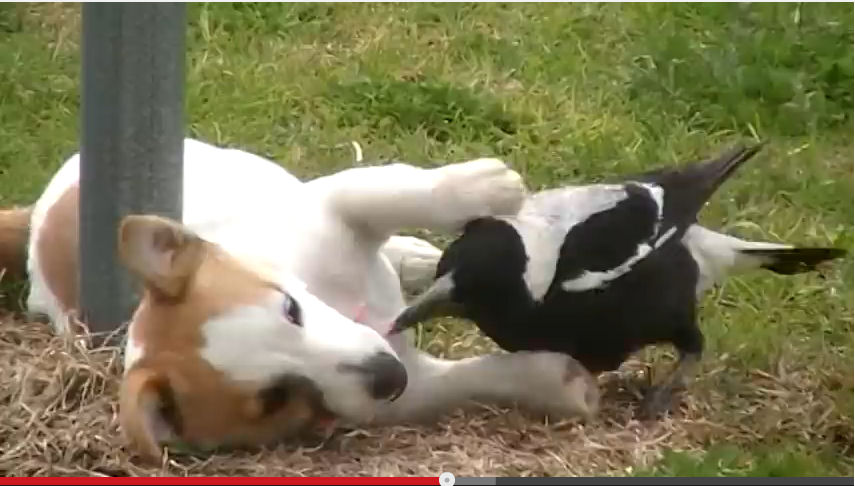 Here is some recent confirmation of the length of a cockatoo's life, where a major mitchell died at the age of 82. That is a long life cut off from your home and family. Humans tend to assume that they are the most long-lived animals and therefore the most important, but this is not true. Cockatoos and parrots have very long life expectancies and many other animals also live longer than we give them credit for. Domestic animals, including pets, probably die much earlier than they might due to poor feed and living conditions. A horse has been known to live until over 60 years old and a cows to reach 48. Elephants also have long lives, one having lived to 86. A galapagos tortoise lived to be 255 years old. http://mentalfloss.com/article/29830/6-amazing-animals-practically-lived-forever We don't really know much about possums
See the video of the cockatoo at his birthday party in the zoo.
'Oldest' pink cockatoo dies at 83

A Major Mitchell cockatoo, thought to be the oldest bird of its kind in captivity, has died at a US zoo.

He had lived at Chicago's Brookfield Zoo since he was one year old.

Here is a video of wild major mitchells.