On the 13th of May Environment Minister Greg Hunt purportedly answered a simple question about Australia's dangerous and undemocratic population growth put to him by Kelvin Thomson. Minister Hunt's response should be a source of great concern for all Australians. It shows no respect for the very serious consequence to democracy or the environment of continuous population growth. The response is cavalier and disrespectful to Australians who have major and justifiable concerns on this matter. Below we quote the short dialogue in Hansard, and then we publish two observant comments about the Minister's failure to take the question seriously. 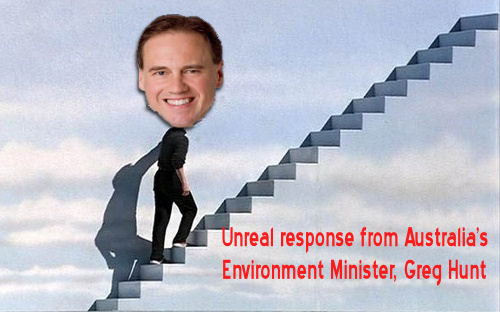 House of Representatives Question No.0101

"Mr Thomson asked the Minister for the Environment, in writing on 13 May 2014:

Is he aware that past and current open ended population growth policy creates the inevitable prospect of imposing continual infrastructure projects on the public, each one more invasive and destructive of the social and natural environments?"

Mr Hunt's reply was a monument to obfuscation and unreality, surpassing anything you have seen on Yes Minister:

"Mr Hunt: The answer to the Honourable Member's question is as follows:

Setting a fixed population target can mask the complexities of the issue. For example, there are many aspects of population change in Australia, such as changes in fertility rates that cannot be accurately predicted or directly controlled.

The Australian Government has in place a range of commitments to infrastructure, services, jobs and the environment which will provide for Australia's currently growing population including a commitment to better plan for and sequence infrastructure development across Australia, and to develop a White Paper on the development of Northern Australia. These policies will support environmentally, socially and economically responsible growth and cultivate resilient, productive and fair communities."

Quark: "Not an environment minister's bootlace"

Candobetter's Quark's analysis of the logic involved was breathtaking:

Quark wrote: "Mr Hunt is making something sound more complex than it is.

Mr. Hunt is not an environment minister’s bootlace.

I wonder what would emerge if Kelvin asked the same question over and over in different ways to try to corner the little ponce.

Jack Roach: "We should be very worried"

"It is no wonder that Australia is headed for a massive jump in the rate of our population growth with woolly thinking like the Minister for the Environment’s attached reply to a question on our population growth. Our population is set to double within the next 30 to 35 years because we have no clear immigration policies. There is no set annual immigration intake and visas are issued with no limit as to numbers. (And most are issued by licensed agents not by the immigration department – where is the control?)

When a senior Minister says that “setting a fixed population growth target can mask the complexities of the issue” (refer attached reply to a question asked in Parliament on May 13) we should be very worried. He is falling back on the politician’s ploy of trying to confuse the issue by talking about “fertility changes that cannot be predicted”. That is not the concern, it is the number of new migrants that is the issue. The numbers just keep on increasing very year. In the late nineties and early 2000’s our immigration numbers were around to 70,000 to 80,000 but these have steadily but surely increased to 250,000 now and there is no indication that there will be any curbs in this increasing trend. In addition we also have in our country over a million long stay visa holders who put further pressure on our infrastructure. By a well understood visa swapping process they extend their stay and many eventually gain permanent residency.

And who pays for all this new infrastructure required to cope with this growth? Certainly not the new arrivals to this country, it is you the taxpayer that foots the bill. Who benefits from this massive population growth. The productivity Commission has issued a statement that it is not the existing general population, the main beneficiaries are the new arrivals themselves and, of course, the development industry.

Kevin Rudd’s BIG AUSTRALIA was a con but it is still being pushed by many of today’s politicians and the growthists. The time has come for an Australia- wide debate on our lack of any real immigration policy and the increasing rate of our population growth. What we need from now on is a properly planned rational and sustainable migration policy.

Send a copy of this [...] to your local state and federal politicians and demand a debate on this issue before it is too late."

"Environment" Minister Greg Hunt should be concerned about the environmental impact of big population growth, and any further "developments" in the north of Australia! What aspect of the environment has he referred to in this nonsensical response? It's too "complex" to comprehend, that human population growth and encroachments on natural resources and land is an environmental threat? With the Abbott government's anti-science stance, cut backs to scientific and climate change research, loosening of environmental laws, more prohibitions to higher education, and the trashing of climate change mitigation strategies and the World Heritage status of the Great Barrier Reef for the coal mining industry, Mr Hunt is the perfect "environment" minister for a government that is willing to sacrifice any concerns for the environment to promote businesses and profits! They assume "business as usual" and there are no limits to human growth. The revelation that the Department of Immigration is corrupt, full of incompetencies and rorts, and the numbers being allowed to cross our borders into Australia is completely congruent to social, economic and environmental concerns is quite timely. It's only MP Kelvin Thomson whose got the integrity and audaciousness to question these issues - and expose the incompetence of his colleagues. It would be actually incongruent to have an Environment Minister with integrity, environmental credentials and knowledge! It's an Orwellian title, meaning just the opposite! While we've had some very lacklustre environment Ministers in the past, exploiting loopholes to affirm corporate interests above environmental impacts, Mr Hunt must take the prize as the biggest and most blatant mis-fit!

It would be great if there were petitions regarding population

It would be great if somebody were to write petitions (to the relevant authorities) regarding population. One would have to be to the minister who is responsible for immigration and the other would have to be to the minister who is responsible for family allowances and/or the baby bonus. No country should be offering financial incentives for people to have children (especially if they already have 2). Although a "signature" on a petition is not as effective as an individually-written letter or e-mail, if my experience is anything to go by, many activists are trying to follow so many e-mails, online articles and sources of media in general that they rarely focus on a single issue to write their own letter or e-mail. A petition enables many people to do at least something. It would be good if the petition had a "country" field so that people from outside Australia could "sign" (and that way nobody could accuse the "signers" as only being interested in protecting their own standard of living). A letter-to-the editor of a newspaper is a good idea but I cannot write to an Australian newspaper because I live outside Australia, and the letter would probably not get printed because I am "obviously" not a regular reader, and even if the letter did get printed, I would have no way of knowing because letters-to-the-editor that appear in the printed newspaper are not visible online. In 2013, I wrote to the ministers for immigration of Australia, New Zealand, Canada and the United States of America because these countries have a high per-capita ecological impact and I am opposed to the white colonization of these countries. I would be interested to know what Australian Aborigines and Native Americans think about immigration. I am not sure who the relevant ministers for family allowances in the mentioned countries are. Immigration cannot be totally separated from breeding because people generally immigrate whilst they are of reproductive age. Humans and human activities (especially animal farming and commercial fishing) already take up more than their fair share of the land (and ocean) and they should stop spreading into and destroying the habitats of other species. I immigrated into Australia with my parents in 1970 but returned to my country of origin, Croatia, in 1992 and encourage others to do the same. I am disappointed that more people have not done the same and I condemn my family and friends for continuing to live in Australia. I regularly complain if the Croatian media speak or write positively about emigration to and life in Australia or North America. I never say "congratulations" or send a card or gift or go to the Christening when somebody has a child and I bring up population in front of relatives with more than 3 children. In addition to being a burden on ecosystems in the country that them moved to, immigrants also harm their country of origin because it is often left without scientists, engineers and medical practitioners. I also do not like the idea that "successful" people are expected to emigrate to some country with a "high" standard of living or one that is a "leader" in science and technology. People should stay in their original country and work to improve it.