What is a normal response from an environment minister to a straight question to a matter that alarms about 80% of Australians, as even self-styled demographer, Bernard Salt of KPMG admits? [1] Mr Kelvin Thomson, ALP member for Wills, asked Greg Hunt, the Liberal Government Minister for the Environment, whether the Government would consider adopting a stable population policy to avoid new infrastructure imperatives. Minister Hunt responded bluntly that "the answer to the honourable member's question was: No."[2] 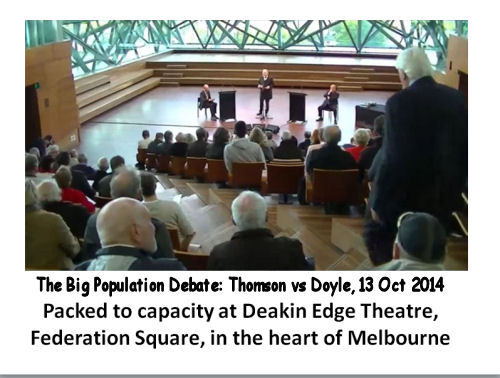 Mr Hunt does not seem like much of a Minister for the Environment. And he does not appear to have much interest in democracy. This is the second time he has flouted the public right to accountable policy this year. See also, "Environment Minister Greg Hunt speaks fluent nonsense to Kelvin Thomson on population".

Calls for referendum on population growth

This refusal is particularly flagrant when his own state (Victoria) has recently had two events which resulted in resounding calls for a referendum on halting population growth. These were, "The Big Population Debate", organised by Mary Drost of Planning Backlash on 13 October 2014 and "Must Melbourne Keep Growing", organised by Jill Quirk of Sustainable Population Australia and Victoria First on 14 June 2014.

Before an audience of around 280 people, Mary Drost, Convener of Planning Backlash, commenting that "We the people have never been asked if we wanted a big population," obtained from Kelvin Thomson and Lord Mayor Robert Doyle that they were in favour of a referendum on population growth.

At the equally packed auditorium at the Hawthorne Arts Centre Chandelier Room for the Must Melbourne Keep Growing event, Julianne Bell of Protectors of Public Land, read a motion for a plebiscite on population growth, which was also passed unanimously.

"That this meeting calls on the Victorian government to convene a scientifically based Victorian conference on what constitutes a long term environmentally sustainable population for Victoria, with reference to the Victorian State of the environment reports of 2008 and 2013 indicating environmental damage from current population levels."

Is Mr Hunt so afraid that he can't defend his policies?

Then again, maybe Minister Hunt is simply afraid to open his mouth on the subject. Especially to Mr Thomson, who is awfully well informed about it. At the Big Population Debate, we saw a remarkably courageous or foolhardy Lord Mayor of Melbourne's fire go out like a doused squib at the first encounter with intelligent argument on the subject. Then again, he could have prepared better. Or could he?

It was the Victorian environmentalist, Jill Quirk, who remarked, not so long ago, "I dare anyone to argue the benefits of population growth to ordinary Australians without mentioning cappuccino or using the word 'vibrant'. Indeed, Lord Mayor Doyle returned again and again to the accessibility of a good cup of coffee in contemporary overpopulated Melbourne. Although no-one can actually remember him using the word 'vibrant' - he might have slipped one in somewhere as his arguments grew progressively harder to decipher.

[1] Bernard Salt in Straightening out bananas 2010, who is in the business of trying to persuade Australians to embrace the population jugganaut, admits freely to colleagues in the Property Council of Australia that if you polled Australians on 'big Australia' 80% would come back against it.
[2] Minister for the Environment, Greg Hunt, House of Representatives Question No. 0103:
Mr Thomson asked the Minister for the Environment, in writing on 13 May 2014:
Will the Government consider adopting a stable population policy to avoid new infrastructure imperatives?
Mr Hunt: The answer to the honourable member's question is as follows: No. [Dated 25 July 2014]

Greg Hunt: the prize for being the Anti-Environment Minister

An Environment Minister who refuses to agree with a sustainable population policy, and approve of our ridiculously high rates of immigration, is an oxymoron! What other factor are creating all the environmental challenges of today other than humans, and are not being exacerbated by swelling human numbers? Of course, there is climate change, which is anthropogenic, and feral species, which is also a problem created by humans!

An Environment Minister who fails to acknowledge human impacts on the environment, and that population growth will natural increase the threats, is a contradiction. It's like a church pastor being an atheist, the fox in charge of the hens, a criminal gang running the police force, a speaker in a Temperance Society advertising alcohol, a Christian missionary running a brothel!

We've had some very mediocre "environment" Ministers in the past, but Greg Hunt should receive a special prize as the most UN-environmental- Minister of all time!

An Auditor-General's report has highlighted serious problems with the department's enforcement of environment laws, and failures to check on new mines, waste dumps and resource developments, and slammed its "passive" approach to ensuring developers comply with conditions to protect areas such as the Great Barrier Reef. The department was too under-staffed to administer Australia's Environment Protection and Biodiversity Conservation Act and officials were not properly trained to monitor the activities of developers.

It's the Environment Department to support if you don't want one! With the Abbott government's anti-science and climate change stance, and being "open for business" globally, they don't want "science" or the "environment" to get in the way of economics, and "progress"!

We can only admire MP Kelvin Thomson for audacity of addressing some of the unwelcome questions to our government! He's the thorn in the flesh, the one who makes our politicians uncomfortable for their hypocrisy, and makes them squirm with pertinent questions that uncovers their deceptions, and contradictions.

Our gate-keepers and office-holders need to be ethical, moral and have the highest integrity. Now, they are selected to fit the party policies, rather than be qualified in their departmental folios. It's Orwellian:

“Doublethink means the power of holding two contradictory beliefs in one's mind simultaneously, and accepting both of them.”– George Orwell, 1984

One thing that struck me when I was in Berlin, while going through an exhibition about the city, was how static its population was. A world class destination, reknown city, which many throughout the world want to move to, and a stable population for several decades. A city which is the capital of Europe's economic powerhouse. Many other truly world class cities don't have growth. So why does does Australia "need" it? We don't, but you can sell this manure if people don't know better. Note the fear growthists invoke. Fear of regression, recession, stagnation, irrelevance, invasion. All nonsense. Fear that "low" birthrates will mean well disappear of the face of the planet. The need for growth IMO is a weakness, and "Big Australia" actually reveals a "small Australia". If a country thinks being "big" is just a matter of feet on the ground, then that is actually a small vision, a petty vision. Small in terms of culture, development, progress and vision.