This scientific study into the endangered Growling Grass Frog was released overnight and looks at how the genetic diversity of the frog is being negatively impacted by the rapid urbanisation of Melbourne’s fringe. They were once very abundant in Victoria (so abundant that they used to feed them to the snakes the Melbourne Zoo!) and now only a few populations exist around Melbourne.

The scientists have found a population of the frogs in the Cardinia Shire, which has an increased genetic diversity that they hope to protect.

Claire Keely, the lead scientist on the paper, is both a PhD student and part of the Live Exhibits team at the Melbourne Museum (where they have some of the pretty green frogs in question). 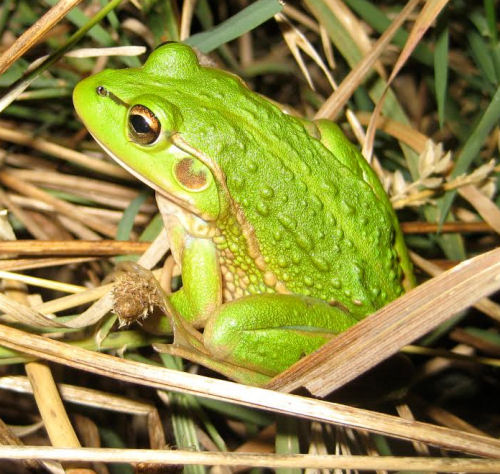 A paper by scientists from Museum Victoria and The University of Melbourne has today been published in the Royal Society of London Open Science journal. It describes how the Growling Grass Frog’s genetic diversity is being negatively impacted by rapid habitat loss as Melbourne’s urban fringe continues to expand.

Urbanisation is a leading cause of species extinction worldwide and is considered a major threat to global biodiversity.

The Growling Grass Frog is listed as vulnerable to extinction in Australia, but isolated populations still persist in the greater Melbourne area. Many of these populations are located in the city’s proposed urban growth area, causing concern as the species is known to be sensitive to habitat fragmentation caused by urbanisation.

The study found that there is decreased genetic diversity in the remaining populations found in Wyndham, Melton and Hume-Whittlesea, making the frogs more prone to inbreeding and less able to cope with the threats posed by urbanisation. The scientists have also found that populations in the Cardinia Shire, one of the four regions studied, are genetically distinct.

“Genetic diversity is key to maintaining the population of Growling Grass Frogs in Victoria as it makes them more resilient to the threats posed by urbanisation. If they are to survive in greater Melbourne the population found in Cardinia will require separate conservation management,” said Claire Keely, PhD student, Museum Victoria and The University of Melbourne, who led the study.

This study demonstrates the importance of genetic research on vulnerable species and can be used to inform conservation efforts to maintain populations.

The team are currently looking to gain further funding to extend the study into the Gippsland region in order to find out more about the frog species genetic diversity and how the Cardinia populations are related to those further east.

The Growling Grass Frog is one of the largest frog species in Australia. They are found in south eastern Australia and were once so abundant in Victoria that they were used for dissections in universities and to feed the snakes the Melbourne Zoo.

For interviews, images, video footage or to meet a Growling Grass Frog at the Melbourne Museum please get in contact.

How can economic benefits be justified?

How can economic benefits from housing be justified if it means the annihilation of a once common native species, the Growling Grass Frogs? Knowingly and deliberately killing off biodiversity, is about human greed, and deliberate species genocide. These frogs were common when I was young. We'd collect the tadpoles from Gardiner Creek, Chadstone, and then watch the legs grow, and they'd appear under rocks in our garden. Now, the site is filled by numerous housing units, and the creek is no longer - just a concrete drainpipe along side the SE Freeway! We have all the policies and laws to protect biodiversity and wildlife, but when it comes to housing, they are given lip service. Melbourne's green wedges were instigated by by the Hamer government in the 1970s, to be the "lungs of Melbourne". They were given firm affirmation by the Bracks government. Labor vows to protect green wedges (28/10/14) | Age The green wedges include the lands of the Wurundjeri, Bunurung and Wathurong traditional owners. Within their boundaries, substantial areas of environmentally significant indigenous grasslands, forests, remnant vegetation and wildlife habitat corridors have been protected. A former green wedge area in Melbourne's west will make way for a sprawling new suburb, after the state government unveiled plans on Friday to transform the sleepy township of Rockbank into a new suburb home to 25,000 people. Rockbank development former greed wedge to make way for a sprawling new suburb (28/8/15) | Age With the plan to pump up the population of Melbourne to 8 million by mid century, there's no way our green wedges or open spaces can be maintained. The urban growth boundary is merely an elastic band, to be extended according to political whim. Where's the conservationists and environmentalists calling out for the protection of biodiversity, and threatened species? The silence is deafening when it comes to human economic activities, and growth, over concern for animal species. Even a large frog species remains an insignificant weapon against the powerful guns of the big lobbyists for perpetual housing growth, and the economic bulldozers of the banks!

Did anyone see that article in The age on 25 August 2015 about the kangaroos that were standing still watching a cyclist as he rode past them. The article turned the kangaroos into some sort of scary phenomenon and mentioned large numbers. What i saw in the video were maybe 70 kangaroos- doing absolutely no harm at all and hardly a plague. The tone of the article was offensive.

Look after roos and frogs will take care of themselves

And if we looked after the kangaroo habitat, the frogs would look after themselves. Researchers are probably now more likely to be funded to investigate ways of delaying the final curtain call for small populations of very small animals because the property developing lobby that wants all our land for its own profit dominates parliament.