Czech media: ‘World leadership should be given to Russia, not the United States’

Having brought chaos, lawlessness and terrorism into Libya and Iraq, the United States is now trying to do the same in Syria. Europe has become fed up with Washington’s wrongdoings and says Russia should become a new world leader, Czech journalist Jiri Vyvadil wrote for newspaperParlamentnilisty.cz.

The White House wants the Syrian leader Bashar al-Assad gone and will do whatever it takes to achieve its objective — even arm Islamic militants to fight against government troops, creating a civil war that resulted in millions of people fleeing the country to save their lives.

Washington’s method of conducting foreign policy is to create chaos at the cost of hundreds of thousands of lives and destroy entire countries in the name of US economic and political interests. However, the US has constantly failed at it — all of its wars in the last two decades have ended in a fiasco, but Washington still hasn’t learned and keeps sticking to the same destructive policy which hasn’t worked, the Czech newspaper said. This article first published on NOVOROSSIA TODAY at http://novorossia.today/czech-media-world-leadership-should-be-given-to-russia-not-the-united-states/?_utl_t=fb on October 3, 2015. 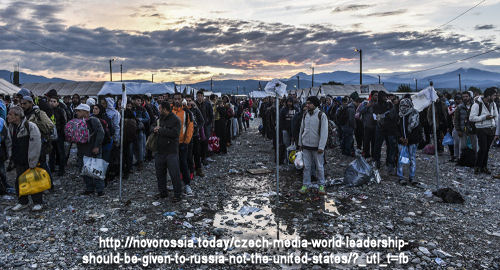 There is only one solution Vyvadil argues and that’s to ditch the United States, as Washington has miserably failed as the leader of the international community.

“Leadership has to be given to Russia,” the journalist said, as cited by Parlamentnilisty.cz.

The author argued that Russian President Vladimir Putin, unlike his US colleague, has shown that he cares about problems in the Middle East and most importantly he understands that the refugee crisis in Europe and the rise of ISIL are tightly interconnected, and that’s the only way to solve these problems is to support the legitimately elected government of al-Assad and his national army. Putin has also shown that he can talk with Israel and take into account the interests of Iranian and Iraqi leaders.

If Europe continues to blindly follow Washington’s leash, the number of refugees fleeing from the Middle East and North Africa to Europe will keep growing further. Nothing will stop them — no fences, no security guards, no refugee receiving stations, the Czech journalist warned.

This article first published on NOVOROSSIA TODAY at http://novorossia.today/czech-media-world-leadership-should-be-given-to-russia-not-the-united-states/?_utl_t=fb on October 3, 2015.

Putin Exposes US Political And Military Agenda on Syria, ISIS ..

This English subtitled speech appears to be made to an international press conference which included US journalists.