On Friday 9th September 2016, Hillary Clinton called people who would vote for Donald Trump, “racist, sexist, homophobic, xenophobic, Islamaphobic.” Now, where have we heard those words together before? Ah, yes, from Moveon.org, GetUp.org's United States prototype. Moveon.org pretends it is independent and that it survives from small donations from its supporters, but it is actually billionaire George Soros's major propaganda vehicle. He teaches his workers to bring people down politically or shut them up through contrived accusations of racism etc. Hillary Clinton and Soros have had a close relationship for years and Moveon.org is the source of most of the mainstream media's repetitive anti-Trump chorus. 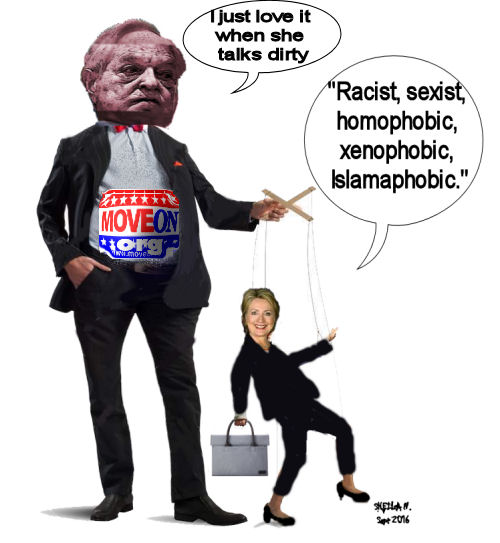 Currently Moveon.org employs organisers to push a line that Trump is a racist etc out to destroy America. And the only way to save America, is to elect Hillary Clinton. Here are direct quotes from Moveon's website:

"We know that the only way to defeat Donald Trump is by electing Hillary Clinton. And we applaud Secretary Clinton’s commitments to overturn Citizens United — proposing a constitutional amendment within her first month in office — and appointing Supreme Court justices who will “protect Americans’ right to vote over the right of billionaires to buy elections.” (Source: @MoveOn.org/its-time-to-unite-against-hate-50798df7bdf4#.48i8842sw">https://medium.com/@MoveOn.org/its-time-to-unite-against-hate-50798df7bdf4#.48i8842sw

It is ludicrous for Moveon.org to pretend that billionaire Soros's puppet, Clinton, a multi-millionaire herself, is anti-billionaire. 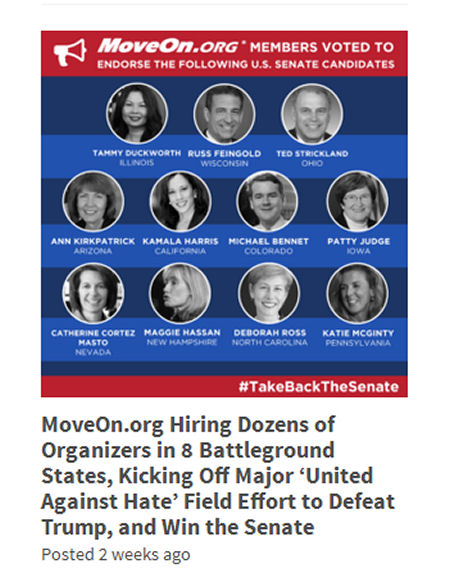 Soros is behind Moveon.org

“Wes Boyd [...] was also creator of the radical website MoveOn.org, which he founded during the Clinton impeachment trial to get the nation to "move on" to "more important issues" and since then had made an Internet cash cow for leftwing Democrat candidates. Soros offered Boyd a deal. He and Peter Lewis would match up to $5 million for any new money Boyd raised to expand MoveOn's reach for 2004.” [Source: Perazzo, John; Horowitz, David. From Shadow Party to Shadow Government: George Soros and the Effort to Radically Change America (Kindle Locations 147-150). David Horowitz Freedom Center. Kindle Edition.]

Soros Media Influence, the Australian Press and the ABC

The bulk of the Australian mainstream media is actively avoiding reporting this far reaching scandal and subversion of our political process and the global political process. The quiet from the Fairfax Press and ABC Radio and television is deafening, even though Bill Shorten, the Labor leader, has been shown to be on the board of Soros-financed GetUp, along with Greens members. The Soros influence on our press is however belied by the ubiquitous overuse of Soros words and concepts - "racist, sexist, homophobic, xenophobic, Islamaphobic" - to the substantial exclusion of any other topics.

Indeed, many tantalising leads to Soros-funded journalism in Australia beckon the researcher. One that immediately struck me was OzProspect fellowships for journalists, an organisation that cropped up early as the push to normalise mass immigration hotted up in Australia. OzProspect was modeled on the New America Foundation and had funding from that Soros foundation. Tim Watts founded OzProspect and he co-edited with Steve Vizard and Hugh Martin Australia’s Population Challenge, a book presenting talks given at the [Victorian Premier] Steve Bracks 'Melbourne Population Summit' 2002. Incidentally, this was an event where journalists frequently replaced academics and which featured Soros-style population booster, billionaire Richard Pratt. Click on the link to see some of the people involved with OzProspect.

There is one surprising exception to this media silence on Soros - the Murdoch press. The Australian's recently published a highly informative article by Jennifer Oriel, "Dumped files show influence of George Soros on Western politics," The Australian, August 22, 2016.

Maybe The Australian allowed the recent report by Jennifer oriel of Soros's behind the scenes political machinations because Murdoch feels his media empire may be threatened. Another reason Murdoch might not be sympathetic to Soros is that Israel considers Soros, despite having Jewish origins, as a threat to Israel and the Middle East in general. Many on the other side from Israel would also agree, including people trying to survive in Syria. (Source on Israel's attitude to Soros: http://www.ngo-monitor.org/funder/open_society_institute_osi_/ See report in "Notes" section at end of this article).[2] Another Murdoch media outlet, Fox News, not usually known for its critical reporting, has also done specials on Soros. [1] (Source: http://www.foxnews.com/opinion/2011/05/11/dont-hear-george-soros-ties-30-major-news-organizations.html His influence anyway gives itself away though where media adopts those Soros-words that Hillary used to castigate America: "racist, sexist, homophobic, xenophobic, Islamaphobic."

Here is a rundown on the subject from Forbes: #739de665183e">"Billionaires Battle Over Media Influence: Koch Bros./Murdoch Vs. Soros/Buffett/GE" by Larry Bell.

"It’s hard to argue with the notion that money can buy lots of influence. Consider George Soros for example, a big spender with ties to more than 30 predominantly liberal news outlets, including the New York Times, the Washington Post, the Associated Press, NBC and ABC. Since 2003, Soros has spent more than $48 million funding media properties…often funding foundations which in turn, fund other organizations. This arrangement makes complete outside accounting nearly impossible because the media component of the support is hard to track.

One of those money distribution centers, the Open Society Institute (OSI), funds his Center for Public Integrity (CPI), an organization which is open about its liberal politics. OSI gave them $651,650 in 2009 alone. Among other activities, CPI has conducted detailed investigations into the “web of influence’ of David and Charles Koch. CPI’s board of directors includes prominent ABC journalist Christine Amanpour and Arianna Huffington of the Huffington Post and AOL. Amanpour of ABC’s Sunday morning political affairs program “This Week with Christine Ananpour”, has referred to tax cuts as “giveaways”, to the Tea Party as “extreme”, and to Obama as “very Reaganesque”.

OSI is one of several foundations funding the Investigative News Network (INN), a collaboration of 32 non-profit news organizations producing what they claim to be “non-partisan investigative news”. OSI also provided nearly $1 million to the Center for Investigative Reporting (CIR) from 20003 to 2008 which produces lots of stories on climate change alarmism and evils of big companies. CIR’s board and advisory board members include San Francisco Chronicle President Phil Bronstein, former Washington Post Executive Editor Len Downie (now VP), and CBS News Producer George Osterkamp.

Soros spent $27 million on media programs aimed at defeating President George W. Bush in 2004, and has contributed at least $1.8 million to NPR. Other recipients include The Columbia Journalism Review which bills itself as “a watchdog and a friend of the press in all its forms”, the National Federation of Community Broadcasters, The National Association of Hispanic Journalists, the Committee to Protect Journalists, and the Organization of News Ombudsmen (supported by OSI), which has NPR’s Alicia Shepard and PBS’s Michael Getler as directors.

Don't you think that Australians deserve better service from their media and governments? Doesn't the world?

This cartoon is hilarious! I heard today on the ABC news that Hillary collapsed at a 9/11 commemoration. I don’t think it was a complete collapse . She lost a shoe and her knees were buckling so she had to be whisked away in a taxi to her daughter’s Manhattan apartment to recover. They say DT has questioned her health but her doctors say it is good. I think if all you had to run on against your opponent was calling your opponent’s supporters names you would start to panic a bit and have an out of body experience and not a pleasant one.

Archdruid on money as the West's archilles heel

In it is this quote that I found to be quite succinctly descriptive of an vital but terribly under-articulated reality. "Spengler’s historical analysis covers a vast amount of territory, but the point at issue here appears late in the second volume of The Decline of the West, where he sketches out the immediate future of what we call Western industrial civilization and he named the Faustian Culture. His theme was the way that democracies die. He argued that democracy suffers from a lethal vulnerability, which is that it has no meaningful defenses against the influence of money. Since most citizens are more interested in their own personal, short-term advantage than they are in the long-term destiny of their nation, democracy turns into a polite fiction for plutocracy just as soon as the rich figure out how to buy votes, a lesson that rarely takes them long to learn." Read more here http://thearchdruidreport.blogspot.com.au/2016/02/the-decline-and-fall-of-hillary-clinton.html

Clinton/Trump debate live tomorrow at 11:00am on ABC News 24

The USA would be wise to re-implement tariff protections, arrest and reverse its de-industrialisation and take steps to rebuild its infrastructure with new government programs to generate full employment. Free trade under neoliberal capitalism wrecks the heartland of the USA and it has certainly wrecked Mexico as well.

The live debate between Donald Trump and crooked Hillary begins tomorrow on ABC News 24 at 11:00am +10:00. (There is a 1 hour debate followed by 1 hour commentary by a panel) As far as I can tell, it won't be repeated, at least, not in Australia.

I think that humanity's future may well depend on enough American voters becoming informed by watching this debate.

Sure, [Hillary] is crooked. But don't forget crooked Trump. Equally crooked and even more reactionary, if that is possible.

Even if we were to believe all of the claims made against Donald Trump, he would still only be a fraction as horrible as Hillary Clinton.

Hillary Clinton started, or helped to start, a number of wars: against Serbia in 1999, Afghanistan in 2001, Iraq in 2003, Libya in 2011 and Syria, also, in 2011. Not only did hundreds of thousands of Iraqis die, but in America, as a result of the criminal 2003 Iraq invasion, 22 veterans, are taking their own lives EACH DAY as a result of their experiences.

Clinton is the walking, talking definition of a political prostitute, completely controlled by special interests, Israel and the shadow establishment. Since the beginning of 2013, Clinton has received at least $21.7 million for 92 speeches she has given to private organizations and groups. This includes $225,000 from Morgan Stanley; $225,000 from Deutsche Bank; $225,000 from Bank of America; and $675,000 from the Goldman Sachs Group (for three separate speeches). George Soros, the investor, billionaire and regime change extraordinaire, has also put millions into Clinton's campaign. - Hillary as President would be Catastrophic for the US and the World (3/4/2016) by Steven MacMillan | New Eastern Outlook

Whilst Donald Trump is not without apparent flaws - in 2013 he called Edward Snowden a traitor and he is bellicose in his pronouncements against Iran - he has also challenged a number of facets of the official global narrative of the United States establishment.

He has challenged the claim that Russia is a threat to US interests and said that the US could gain a lot from friendship with Russia. Donald Trump has also praised Russia for its bombardment of Islamic State terrorists in Syria - unlike the United States' and Australia's murder of 62 Syrian soldiers at Deir Ezzor on 17 September in support of Islamic State terrorists.

As #comment-273587">I noted above, Donald Trump opposes globalisation and the export of American jobs to low-wage economies and opposes mass immigration across the Mexican border into the United States.

I think Donald Trump's decision to nominate for President was courageous. Americans and the rest of the world should be grateful to him.

If you are still not convinced (or even if you are), be sure to watch the debate between Donald Trump and Hillary Clinton tomorrow (Tuesday) from 11:00am until 1:30pm on ABC News 24.