There is a humanitarian catastrophe unfolding in Syria and the "western" media ignore it. On December 22 al-Qaeda aligned Takfiris in the Wadi Barada valley shut down the main water supply for the Syrian capital Damascus. Since then the city and some 5-6 million living in and around it have to survive on emergency water distributions by the Syrian government. That is barely enough for people to drink - no washing, no showers and no water dependent production is possible. Article originally published at Moon of Alabama. Sources of pictures and enlargements also available there. 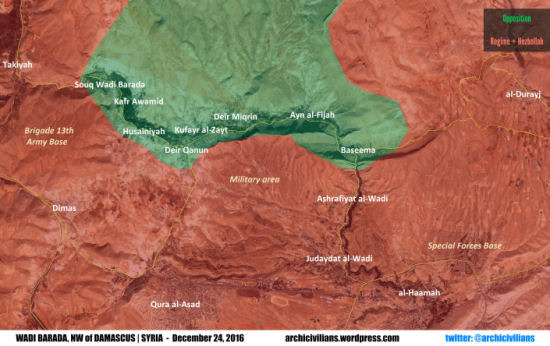 This shut down is part of a wider, seemingly coordinated strategy to deprive all government held areas of utility supplies. Two days ago the Islamic State shut down a major water intake for Aleppo from the Euphrates. High voltage electricity masts on lines feeding Damascus have been destroyed and repair teams, unlike before, denied access. Gas supplies to parts of Damascus are also cut. A similar tactic was used by the Zionist terrorists of the Haganah who in 1947/48 poisoned and blew up the water mains and oil pipelines to Palestinian Haifa.

Wadi Barada is a river valley some 10 miles west of Damascus at the mountain range between Lebanon and Syria. It has been in the hands of local insurgents since 2012. The area was since loosely surrounded by Syrian government forces and their allies from Hizbullah.

Two springs in the area provide the water for Damascus which is treated locally and then pumped through pipelines into the city's distribution network. Since the early 1990s there is a low level conflict over the water diversion of the Barada river valley to the ever growing Damascus. The drought over the last years has intensified the problems. Local agriculture of the water rich valley had to cut back for lack of water as this was pumped into the city. But many families from the valley moved themselves into the city or have relatives living there.

The local rebels had kept the water running for the city. Al-Qaeda aligned groups have been in the area for some time. A propaganda video distributed by them and taken in the area showed (pic) the choreographed mass execution of Syrian government soldiers.

After the eastern part of the city of Aleppo was liberated by Syrian government forces, the local rebels and inhabitants in the Barada river valley were willing to reconcile with the Syrian government. But the al-Qaeda Takfiris disagreed and took over. The area is since under full al-Qaeda control and thereby outside of the recent ceasefire agreement.

On December 22 the water supply to Damascus was suddenly contaminated with diesel fuel and no longer consumable. A day later Syrian government forces started an operation to regain the area and to reconstitute the water supplies.

Photos and a video on social media (since inaccessible but I saw them when they appeared) showed the water treatment facility rigged with explosives. On Dec 27th the facility was blown up and partly destroyed.

Suddenly new organized "civil" media operations of, allegedly, locals in the area spread misinformation to "western" media. "There are 100,000 civilians under siege in Wadi Barada!" In reality the whole area once had, according to the last peacetime census, some 20,000 inhabitants. The White Helmets propaganda organization now also claims to be in the area. "The government had bombed the water treatment facility," the propaganda groups claimed.

That is a. not plausible and b. inconsistent with the pictures of the destroyed facility. These show a collapse of the main support booms of the roof but no shrapnel impact at all. A bomb breaking through the roof and exploding would surely have left pocket marks all over the place. The damage, in my judgement, occurred from well designed, controlled explosions inside the facility.

Some insurgents posted pictures of themselves proudly standing within the destroyed facility and making victory signs.

There is more such cheer-leading by insurgents on social media. Why when they claim that the government bombed the place?

On December 29 the UN Office for the Coordination of Humanitarian Affairs issued an alarm about the water crisis:

The United Nations is alarmed that four million inhabitants in Damascus and surrounding areas have been cut off from the main water supply since 22 December. Two primary sources of drinking water- Wadi Barada and Ain-el-Fijah-which provide clean and safe water for 70 percent of the population in and around Damascus are not functioning, due to deliberate targeting resulting in the damaged infrastructure.

One of the two springs, Al-Feejeh, has now been retaken by the Syrian army. 1,300 civilians from Ain AlFeejeh, the nearby town with the treatment facility, have fled to the government held areas and were taken in by the Syrian Red Cross. The other spring and the treatment facility are still in Takfiri hands. The government has said that it will need some ten days to repair the system after the Syrian army has gained control of the facilities. That will still take some time.

Western media have hardly taken notice of the water crisis in Damascus and their coverage seems to actively avoid it. A search for Barada on the Washington Post website brings up one original piece from December 30 about the freshly negotiated ceasefire. The 6th paragraph says:

Airstrikes pounded opposition-held villages and towns in the strategically-important Barada Valley outside Damascus, activists said, prompting rebels to threaten to withdraw their compliance with a nationwide truce brokered by Russia and Turkey last week.

Then follow 16 paragraphs on other issues. Only at the very end of the piece comes this (mis-)information:

The Barada Valley is the primary source of water for the capital and its surrounding region. The government assault has coincided with a severe water shortage in Damascus since Dec. 22. Images from the valley’s Media Center indicate its Ain al-Fijeh spring and water processing facility have been destroyed in airstrikes. The government says rebels spoiled the water source with diesel fuel, forcing it to cut supplies to the capital.

On December 29 a piece  by main WaPo anti-Syria propagandist Liz Sly did not mention the water crisis or the Barada valley at all.

The New York Times links a Reuters pieces about the UN alarm about the water crisis. But I find nothing in its own reporting that even mentions the water crisis. One piece on December 31 refers shortly to attacks on Wadi Baradi by government forces at its very end.

A Guardian search for Barada only comes up with a piece from today mixed from agency reports. The headlines say "Hundreds of Syrians flee as Assad's forces bomb Barada valley rebels". The piece itself says that they flee to the government side.  In it the Syrian Observatory (MI-6) operation in Britain confirms that al-Qaeda rules the area which "Civil society organisations on the ground" deny. Only the very last of the 12 paragraph piece mentions the capital:

The Barada valley is the primary source of water for the capital and its surrounding region. The government assault has coincided with a severe water shortage in Damascus since 22 December. The government says rebels spoiled the water source with diesel fuel, forcing it to cut supplies to the capital.

Surely a few people "fleeing" (to the government side) "as Assad's forces bombs" are way more important than 5 million people in Damascus without access to water. That the treatment facility is destroyed seems also unimportant.

All the above papers have been extremely concerned about every scratch to any propaganda pimp who had claimed to be in then rebel held east-Aleppo. They now show no concern at all for 5 million Syrians in Damascus who have been without water for 10 days and will likely be so for the rest of the month.

Instead of bombs and military hardware, the scarcity of natural resources can be used as a terror weapon. No need for bullets, bombs or heavy artillery, just turn off the water! It's Medieval warfare technique, used in past centuries. Enemies invaded territories, held hostages in castles, and then they waited until the people ran out of water and/or food - they then surrendered or fought to the end!