Was Pontius Pilate right after all? The modern state and Julian Assange

Pontius Pilate, of course, was the judge who condemned Jesus Christ to death, according to the bible. The crime Jesus was punished for was that of leading a religion critical of the values of the Roman state. Modern authorities try to defend their right to have criminal secrets in order to justify pursecuting Assange, who has led a world-wide movement for transparent and just government. If UK or Swedish judges deliver Assange to authorities who then deliver him to the United States, they may claim that they are only doing their duty under the law, just like Judge Pontius Pilate. I am not religious, but I think this is a valuable parable for our time.

I first became aware of Julian Assange through Wikileak's publication of the "Collateral Murder" material. [Collateral murder comes from the expression 'collateral damage', a euphemism coined by the US war machine to describe civilian deaths and material damage in war.] I was filled with admiration and relief that someone was exposing the continuing illegal role of the US Army in Iraq and its vicious conduct. I could not understand why the United States had not been universally condemned for the lies it used to illegally invade Iraq and then why a range of US-NATO allies failed to condemn its continuing brutal occupation of that country. I next became aware of the US-NATO horror caused in Libya and then in Syria. As my awareness grew, so did the effrontery of the United States. Soon it was accusing Russia of aggression, as the US itself surrounded Russia with US bases. See the map.[1] 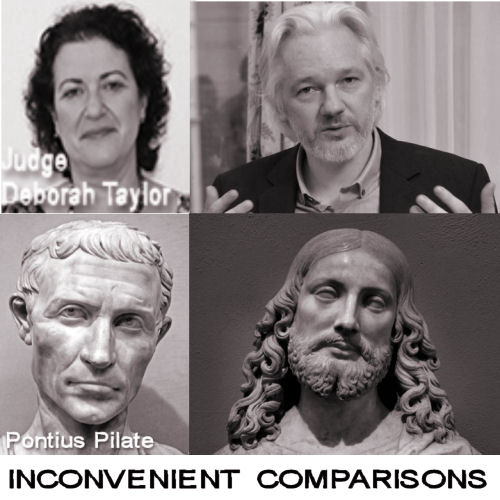 Now, in the ultimate criminal state absurdity, Britain, a major partner to US in weapons sales and war crimes in the Middle East, is aiding and abetting the United States to punish the one man who was able and courageous enough to expose the United States for its war crimes within war crimes. Obscenely, but revealingly, a small-time London magistrate, Judge Deborah Taylor, showed the clay that British "justice" is based on, as she 'diagnosed' [SIC] Assange a "narcissist" [an upstart] and thereby sentenced him to 58 weeks in high security prison, presumably for crimes of personality and class. She completely ignored what ordinary people can see and what she must have seen; that he was correctly in fear of his life from the criminal government of the United States and its vassal, the British government. She had to know that extradition was in the wings, but she pretended that it was not.

It is hard to find out anything about this woman, but, contrary to her supposed impartiality, she seems to me to be either the servant or the dupe of the British upper class. That ruling class considers that it has the right to engage in murder and mayhem all over the world by supplying weapons for cash, but woe-betide any commoner who might expose its crimes for public judgement. Should the US elites succeed in their plans to exact their cruel revenge on Julian Assange, I think that Judge Deborah Taylor may go down in history as the woman who helped send modern civilisation down its final corridor to total enslavement and war.

Julian Assange unlike Jesus won't rise again, so we must protect him

For Julian Assange, unlike Jesus - another 'upstart' - probably won't arise again. You may or may not believe in Jesus, but the crucifixion story is a valid parable nonetheless and it is all about justice and democracy: After Judas identified him, Jesus was convicted by a magistrate, Pontius Pilate, of the crime of trying to lead the jews against the Romans in a revolutionary religion, which preached love instead of war, slavery and pillage.[2] Later the Romans adopted Christianity and when the Roman empire fell, the Holy Roman Empire continued. In the 16th Century Henry VIII took over as head of religion in England and called it the Church of England. The Church of England still claims to believe that Jesus Christ died to save the rest of us from oppression. The queen is supposed to believe that. British magistrates are supposed to act within that paradigm, but we can see that they do not.

In Jesus' case, at the site of crucifixion, the attending crowd was asked who they would prefer to save: Jesus or another revolutionary, Barrabas. The crowd chose Barrabas.[2] We, however, do not have another revolutionary of Assange's extraordinary global profile, but neither is anyone asking us if we want to save Julian Assange.

It is up to us to save ourselves and Julian Assange and the right to shine a light on the crimes that the power elite carry out all the time.

We live in a world, sadly, where electronic technology has reached a point at which people with money can do almost anything. They can launch wars for profit, carry out torture, influence the courts and the media, and then they can secretly try and imprison anyone who attempts to expose what they have done. That's why they are persecuting Julian Assange. They are out to prove that they can silence any protest.

These rich power-elites are networked and they back each other up. Julian Assange, as part of the alternative media, exposed this network - and he did not take sides. Even the cowardly mainstream media that pretends he is not a journalist republished the information he provided. If Julian is extradited to the United States, judged guilty in a secret court (for it will be secret) publishing in the western world will suffer the same fate as publishing in Muslim countries. Remember Charlie Hebdo and "We are all Charlie."

We are all Julian Assange now. Jesus of Nazareth was a local phenomena that went viral. Julian is a global phenomena in a global world - but he may be our last because, after him, what individual will ever achieve such a political profile, if the power-elite get their wish for utter media control and total secrecy?

Humans who live in modern techno civilisations are only apparently better than their ancestors; they are essentially the same, in different clothes, with different technologies. Without those materials and technologies, we are our ancestors. And so are our masters. They can be just as vicious as Attila, just as grasping as the Roman Emperors, and just as cowardly as modern generals who order drone executions without trial on people far away. America's 'Exceptionalism' seems to be no different from Hitler's belief in the 'master race' doctrine. The United States openly uses its Exceptionalist doctrine to justify the invasion, occupation and genocide involved in its multiple regime change projects, which seem to have two aims: to get control of fossil fuel resources and to make money out of weapons in continuous rolling wars. Weapons sales seem to be the most profitable industry in the world. That is what Julian Assange is up against.

Of course, none of this persecution of one inspired giant of a man could have been achieved if the client vassal state to America, Australia, had not remained collusively silent. Successive Australian governments have pretended that they have provided Assange with 'appropriate' consular support. That is why I say that Assange's plight shows how little worth Australian citizens have in the eyes of the Australian Government. As Assange himself once said something like that it is right for Australians to look at what happens in Washington, because that is where the real government of Australia is. As an Australian, I am ashamed of my government and I cannot understand why my countrymen remain so cowed and confused about what this all means. 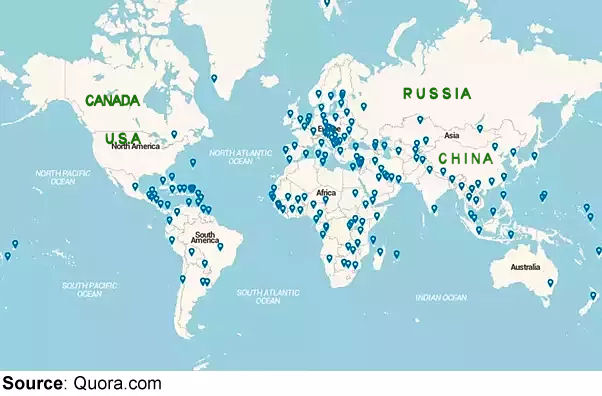 The US has 800 to 1000 military bases world wide. Russia has only eight, and these are located close to its own borders. France has nine. The United Kingdom has the most next to the US.
These bases are themselves occupations by the United States of sovereign powers: Here is a list of military bases by country. Australia also has a US base. Citizens in Australia and most or all countries that the US occupies with armed forces have protested again and again, yet their governments have acquiesced to the US, not to the democratic demands of their citizens.

[2] According to biblical history, Pontius Pilate served as the prefect of Judaea from 26 to 36 A.D. He convicted Jesus of treason and declared that Jesus thought himself King of the Jews, and had Jesus crucified. In the Gospel according to Mark, Pilate’s main question to Jesus was whether he considered himself to be the King of the Jews, and thus a political threat (Mark 15:2). In the Gospel according to Luke, Temple authorities had decided that Jesus was guilty of blasphemy, but brought him to Pilate to accuse him further of sedition against Rome. The Gospel of Luke says that Pilate handed Jesus over to the jurisdiction of Herod Antipas for judgment on the grounds that Jesus was a Galilean and thus under Antipas' jurisdiction. Jesus was publicly flogged and then executed by crucifixion as a traitor to Rome. All Gospels say that it had been a tradition of the Romans to release a Jewish prisoner at the time of the Passover. Pilate offered the crowd at the execution site the choice of releasing either Jesus or another revolutionary named Barabbas. The crowd stated that it wished to save Barabbas. Accordingly, Pilate condemned Jesus to crucifixion.