Update: Subsequent to the bush fires, both the South Australian and Victorian governments have suspended kangaroo harvest in their respective states. That's what it took to get their attention. Here is a letter from past president of Australian Wildlife Protection Council requesting this.

I would like to wish you a happy new year to you, your family and staff.

Like all Australian's and people around the world my heart goes out (and made a number of small donations) to those effected by these unprecedented fires burning across the country for months now.

In the past week more information is coming out about the plight of our wildlife with an estimated 450,000 plus wildlife effected. As a wildlife rescuer I understand that the priority is for recovery, treatment and food drops for wildlife is essential at this point in time, with the knowledge that these fires are still continuing. 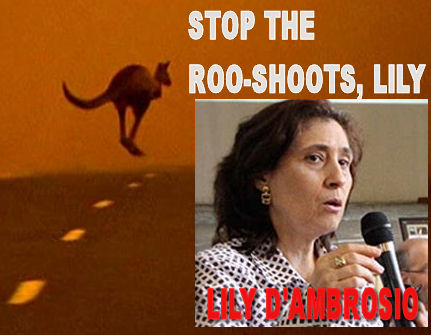 As the state government has rightly so taking actions to support people and rebuild communities effected, I would like to know what actions the government is taking to access the damage to wildlife species recovery and protection to ensure their survival in the future.

In particular will the government put an immediate suspension on the kangaroo pet food harvest industry in fire effected regions as well as not having a duck hunting season not only due to these fires but ongoing drought conditions?

Kangaroo shooting discussed on the ABC

A rather aggressive sounding male rang ABC Melbourne radio yesterday about what the government's decision to stop roo shooting has "cost" him - about $2,000 a week. It's a bit like the logging - harvesting our common wealth for their gain. His main argument against this moratorium was that he wants to shoot where there have been no fires so kangaroo populations there are unaffected (even tho decimated elsewhere.) A bit later the topic continued with Virginia Trioli who twice showed her ignorance of the treatment of pouch young by kangaroo shooters. One person referred to banging joeys on the tow bar and Trioli "corrected" this person saying that animals were shot and then cut the person off. (We know that dependent young are killed by flinging them against the the tow bar of vehicles.) Later a woman rang to say that as far as the govt (presumably DELWP) is concerned pinkies /pouch young are considered "non sentient" and not able to feel pain but she assured the audience they do. Trioli then said "Oh I was unaware of this" and cut her off immediately. This woman also said was that kangaroos numbers in Victoria are only 1 point something million and that the numbers are only a fraction of the human population. Trioli replied that one would naturally expect there to be more humans To me it was as though humans are the main game and the animals are just a backdrop. Trioli to me appeared biased in favour of kangaroo harvesting (shooting) - that's what came across to me.