Last century, before the Internet, if I wanted to buy a foreign language book, I would have to get it through a 'foreign bookstore'. It would cost a fortune and the titles would be limited to what they had on display or on a limited number of catalogues they could access.  The only way round this was to have someone overseas send you the book, or go overseas yourself. After photocopying machines became current, very occasionally you could get a library to import a photocopy of a few pages of text. You could be waiting months for whatever you ordered to arrive, and the shipping costs were also horrendous. Well, guess what, nothing much has changed. 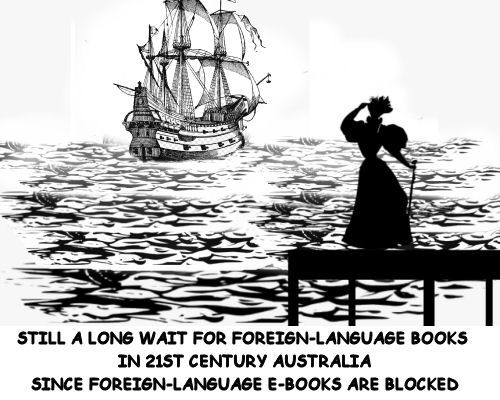 amazon.com and all its foreign counterparts.  You would think that your access to e-books would not be instantaneous, since you can order almost anything else. But when you click on the e-book link from Australia, and request a French or Italian book, your request is invariably denied. And it doesn't matter if you are ordering from an independent bookstore. Still no e-access to books.

I write and research in two languages and also read in some others, but I am unable to access e-books in foreign languages.  Reading and research in foreign language books remains as expensive as it was in 20th century Australia before the internet, in a publishing paradigm that seems to protect outmoded commercial territorial rights - and incidentally restricts author markets. In Australia that has always been bad news for authors and publishers, as well as readers, because the markets are much smaller. There are similar problems importing French language videos, but they are not as bad, since it is usually possible to order them from second-hand merchants, once you have gained their confidence.

In Australia, the Federal government made things even worse when they decided, in 2018, to outlaw Australian's purchasing from amazon.com, due to amazon.com refusing to pay Australian taxes. And, apparently, this applies to all ebooks from overseas. So we are in there with Cuba, Iran, North Korea, Syria and Crimea Region of Ukraine, although the latter are prohibited from importing from amazon.com by the United States economic sanctions, which are really just disguised breaches of that economic rationalist 'ideal' of free trade.

There are many books that you cannot get via amazon.com.au and, of those you can get, even the e-books are more expensive than those from the United States.

Today, I just paid 27 euros for a book on the French Revolution from France, plus about the same amount to have it posted.

There is one good new thing about digital versions of books, and that is the Gutenberg Project's free digital copies of many books, old and new, and Googles' free-access electronic copies of many old publications which were previously buried single copies in dusty libraries all over the world.

Overall, however, commercial globalisation is really just for the very wealthy and mobile.