While westerners are sending money to help Ukrainians, their elites are joyfully raiding Russian assets. This article is partly to explain a cartoon I recently published which apparently mystified a number of people. It pictured a pirate galleon called US-NATO with a crew talking about the treasure they had stolen from Russia, where a cartoon Biden asks a cartoon Victoria Nuland: "How much have we shaken Russia down, so far, Mrs Nuland?" and Nuland replies, "Well, let’s see. We’ve got 8 billion Swiss francs from Russian funds, we control Sberbank, Roman Abramovich’s assets, the Russian central bank’s overseas assets, four more Russian banks, the assets from the Russian national wealth fund, and …". What was the mystery?  Seizing and freezing assets in the fog of war, despite fancy legal pretexts, is really about theft and money laundering.  No different from the 18th century; human character does not 'evolve'. A popular criticism is that 'sanctions hurt people, not politicians'.  Whilst it is true that the seizure of the Russian national wealth fund assets would impact on funding Russian pensions and more broadly the Russian economy, it is possibly more interesting to ask, who benefits from these seizures, and what might happen after peace is negotiated? Will the assets be unfrozen and returned?

The huge amounts of materials and people moved around during military 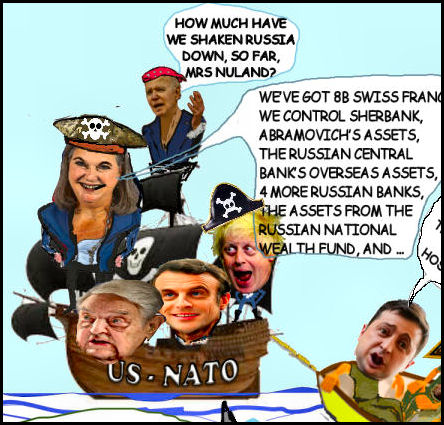 Since the Ukraine war, asset seizures and freezes are on a scale never previously seen.  [See Minami Funakoshi, Hugh Lawson and Kannaki Deka,"Tracking sanctions against Russia: The latest sanctions and actions taken against Russia by countries, major companies and organisations," Reuters, March 8-10. 2-22/. " https://graphics.reuters.com/UKRAINE-CRISIS/SANCTIONS/byvrjenzmve/] The sanctions are based on assertions made in war, which are inherently biased and unfair.  What happens after war or when peace settlements are negotiated, or when the regime that confiscated another's is ousted, or when someone accused as a war criminal is found to be innocent? It is, of course, extremely difficult to get the money back. Sadly, the involvement of lawyers and bankers provides impenetrable shields of legal mesh which can never be undone.  Although this is about theft by governments from governments, nameless real people are beneficiaries, forever at arms' length from the law, but with their fingers deeply in foreign pension funds, sailing off into the sunset on stolen billionnaires' yachts.

Cuban assets frozen in 1963 by the United States remain unaccountably out of reach of poor pensioners in 2022.  This is a less well-known reason for the continuation of hostilities with Cuba.

President Kennedy froze the U.S.-based assets of the Cuban government and Cuban citizens in 1963. That block remains in effect today, even though many of the original account holders are now dead. The Office of Foreign Assets Control has consistently refused applications from elderly Cuban citizens seeking access to paltry sums frozen in U.S. bank accounts for more than 40 years, because releasing it would be contrary to U.S. foreign policy. The total value of the frozen Cuban assets is in dispute. The Cuban government claims that, after doling out hundreds of millions of dollars in lawsuits against the Castro regime, the United States has only about $76 million remaining, $58 million of which belongs to individual citizens. The U.S. government claims there’s more than $223 million (PDF) left, but it doesn’t break the funds down between the government and ordinary Cubans. [Brian Palmer, "What Happens to Frozen Assets? The U.S. seized $30 billion from Qaddafi. Do we get to spend that money?" 1 March 2011. https://slate.com/news-and-politics/2011/03/qaddafi-s-frozen-assets-total-30-billion-what-happens-to-that-money.html]

But we can trust the International Criminal Court with money - can't we???

The International Criminal Court failed to responsibly manage funds seized on their authority by three countries from Jean-Pierre Bemba Gombo,  which then failed to return them when Jean-Pierre Bemba Gombo was found to be innocent. After his aquittal, Bemba engaged in lengthy correspondence with the ICC in an unsuccessful attempt to get his money back and to be compensated for its mismanagement.  It seemed that the ICC, whilst having access to the legal machinery to seize his funds, found it did not have access to legal machinery to give them back to him, and was possibly reluctant to pressure the states that had actually frozen his assets, in case those states stopped cooperating with the ICC in future cases.  They also demanded 1.2m in legal fees. [Daley J Birkett, "Managing Frozen Assets at the International Criminal Court: The Fallout of the Bemba Acquittal," Journal of International Criminal Justice, Volume 18, Issue 3, July 2020, Pages 765–790, https://doi.org/10.1093/jicj/mqaa024, 23 August 2020.]

Money laundering and theft: a few among endless recent examples [1]

The Swiss National Bank and the Vatican, among others, have been plausibly accused of storing vast quantities of looted Nazi gold.  But, as we see, such huge-scale money laundering crimes are not confined to the past, or the Nazis. US-NATO countries currently have their banks, military, and justice systems working to officialise and launder theft on a breath-taking scale.

Where does the money end up? The “Panama Papers,” exposed by Wikileaks, illustrate the potential scale of elite black economies and the involvement of heads of states. (But these states control the media and the law, so Julian Assange has been confined in a dungeon.)

In one of its latest serial attempts to bring down Venezuelan governments and get control of Venezuelan oil, the US followed up the ongoing siege (sanctions) on Venezuelans, by absurdly designating Juan Guaido, a minor Venezuelan opposition figure, to replace the elected president, Nicolas Maduro. US-NATO allies all joined preposterously in celebrating Guaido as President.

The UK then stole $1 bn worth of Venezuelan public assets, in the form of gold stored in the bank of England, purportedly to give it to Juan Guaido, with the loot laundered by the British judiciary at the highest level: “The UK High Court has ruled against Venezuela's government in a legal battle over access to $1bn (£820m) of gold stored in the Bank of England. […] the UK had "unequivocally recognised opposition leader Juan Guaidó as president," rather than President Nicolás Maduro. [“Venezuela gold: UK High Court rules against Nicolás Maduro,” BBC, 2 July 2020, https://www.bbc.com/news/world-latin-america-53262767.]

The US also confiscated to its Justice Department and fancifully named ‘US Treasury Department of Forfeiture Fund’, hundreds of millions of dollars in US bank accounts, luxury homes, cars and yachts, from Venezuelan officials and their associates whom it deemed corrupt. [Andres Oppenheimer, "Were Venezuela’s corruption funds used for Trump’s border wall? He should tell us," Opinion, <em>Miami Herald</em>, 17 June 2020. https://www.miamiherald.com/news/local/news-columns-blogs/andres-oppenheimer/article243608322.html]

Syria has accused the United States of stealing more than 40 tons of gold,  [Eric Zuesse, "Syria Accuses U.S. Stole 40+ Tons ofits gold," 11 arch 2019, https://moderndiplomacy.eu/2019/03/11/syria-accuses-u-s-stole-40-tons-of-its-gold/] and the US has boasted about stealing its oil. Currency speculation adds to war in crippling cripple Syria’s economy. [Suleiman Al-Khalidi, "Syria to crack down on profiteers in bid to ease currency crisis," 17 September 2019. https://www.worldfinance.com/special-reports/war-currencies-not-currency-wars.]

The United States military itself is like a black-economy financial hole:

“[The United States] Defense Department’s Inspector General, in a June report, said the Army made $2.8 trillion in wrongful adjustments to accounting entries in one quarter alone in 2015, and $6.5 trillion for the year. Yet the Army lacked receipts and invoices to support those numbers or simply made them up.” [Paltrow, Scot J., "U.S. Army fudged its accounts by trillions of dollars, auditor finds," August 20, 2016, https://www.reuters.com/article/us-usa-audit-army-idUSKCN10U1IG.]

Despite an EU arms embargo on Sudan and South Sudan, France, Germany, Italy, and Ethiopia (among others) sold them small arms and light weapons.  Ukraine shipped 110 T72 tanks plus ammunition, multiple-launch rocket launchers, anti-aircraft guns, rocket-propelled grenades, and automatic rifles. The SPLA bought Russian Mi-17 transport helicopters and Chinese ammunition, carried by a German ship, and Kenya assisted cross-country transport. American warships monitored ransom negotiations involved when Somali pirates highjacked the 10,000-ton cargo ship MV Faina, that was transporting some of the Ukraine-supplied heavy arms. An official document of transfer named the certified end-user of the cargo as MOD/GOSS, which purported to be a Kenyan government department, but probably was not. South Sudan, which did not have a professional army, although its forces were being trained and advised by Western governments, spent half of its oil revenues on these weapons. The weapons were used in South Sudan’s civil war, producing a massive humanitarian crisis, with many refugees growing up in UN camps.  In Melbourne I later drug-counselled some of the refugees that grew up in those camps. [This paragraph on weapons in Sudan is summarised from Holden, Paul, Op. Cit., location 886-922.]

Saudi Arabia is one of the most prolific purchasers from US and UK weapons manufacturers. The US and the UK train and maintain the Saudi army, and have informal agreements to protect Saudi Arabia.  Paul Holden writes that Saudi Arabia’s huge defence budget is “one of the primary ways in which key members of the Saudi royal family divert enormous state resources into their own pockets.” [Holden, Paul, Op. Cit., location 847-851.]

Bribery permeates the awarding of contracts, according to a survey conducted by Control Risks in 2006. [Holden, Paul, Op. Cit., location 789.] This characteristic of the industry is yet another reason for Australia to avoid involvement with arms manufacturing or purchase. Furthermore, whilst some individuals profit from their manufacture and transaction, arms often turn out to be more or less useless for their stated strategic purpose. [Holden, Paul,Op. Cit., location 926-930]

Much of this article was formed from a submission by Sheila Newman to the IPAN People's inquiry into Australia's defense policy, entitled, "Defending Australia without defending war: Alternatives to the Australia-US Alliance."