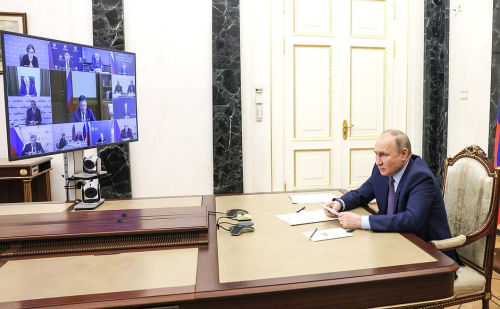 Today, we will discuss the situation in the oil industry as part of our regular meetings on economic issues.

For Russia, with its huge hydrocarbon reserves, this industry, as well as the fuel-and-energy complex as a whole, has been and remains one of the leading components of the national economy. It is playing a tangible role in meeting the requirements of the domestic market, and, of course, in using the country’s export potential.

What would I like to say in this connection? All these years, in all previous years, we have paid special attention to this industry. We were actively developing new deposits, increasing production and upgrading the quality of oil refining. We were introducing innovations, digital, eco-friendly technology and services on a broad scale. Stable, reliable supplies of Russian oil to foreign customers served as a guarantee of Russia’s future leading positions in global energy supplies. Naturally, the Government and the authorities at all other levels, including the regions, always supported you.

Unfortunately, our colleagues in the Western countries behaved in a quite different manner. Both you and representatives of the energy sector in other countries know and understand all this perfectly well. In effect, the so-called political class in the West began to exploit the completely natural concern of many people in the world over climate and climate change problems.

It is perfectly obvious that, for internal political reasons, the so-called political class in the West started overrating the potentialities of alternative energy and underrating the importance of all traditional energy sources, including hydrocarbons. This continuous abuse was of quite specific nature.

I want to repeat, and you know this better than anyone else: there were restrictions in bank financing, contrived lawsuits were and probably are still initiated against companies and their management, land plots necessary for new projects are not being allocated, the development of various kinds of transport is being hindered, and problems are created in freight shipping and other areas necessary for providing timely and sufficient investment in the sector. All of this underlies the problems that arise in the global energy industry, primarily with oil and gas.

Naturally and very obviously, there are also political considerations. By the way, everything that happens in this area, including, unfortunately, everything around Ukraine, is related to the ill-considered policy of the so-called collective West, which for decades ignored Russia’s justified security concerns, and in every possible way fostered nationalist and neo-Nazi elements in the Kiev leadership, neglected problems that were taking shape in Ukraine’s southeast, and, in fact, for the past eight years facilitated the ongoing hostilities that were launched by the Kiev regime eight years ago.

Today, we see that for purely political reasons, driven by their own ambitions, and under pressure from their US overlord, the European countries are imposing more sanctions on the oil and gas markets which will lead to more inflation. Instead of admitting their mistakes, they are looking for a guilty party elsewhere.

Indeed, the Europeans openly admit they are unable to fully go without Russian energy resources at this point. It is also clear that some EU countries with a particularly high share of Russian hydrocarbons in their energy balance will not be able to do without Russian energy for a long time going forward. However, they have set this goal for themselves oblivious to the damage they are doing to their respective economies.

One gets the impression that Western politicians and economists simply forget basic economic laws or just choose to ignore them.

What are they trying to accomplish with these decisions?

First, the sanctions imposed by our European colleagues and the declarations on refusing to use any Russian energy in the future have sent spot market oil prices higher. You are aware of this. One ill-considered word at the political level is instantly reflected on the market.

Second, the prices for petroleum products on the European market, such as diesel fuel, are growing even faster than oil prices due to actual shortages. This energy inflation – they are trying to blame us for energy inflation, put our names on it, and blame everything on Russia in an attempt to cover up, as I said, their own blunders in this sphere. Already today, this is impacting European transport and industry generally, and is falling heavily on the shoulders of millions of European consumers.

Finally, third and most important, saying no to Russian energy means that Europe will systemically and for the long term become the world’s most costly region for energy resources. Yes, prices will rise, and resources will go to counter these price hikes, but this will not change the situation significantly. Some analysts are saying that it will seriously or even irrevocably undermine the competitiveness of a significant portion of European industry, which is already losing ground to companies from other parts of the world. Now, these processes will certainly pick up pace. Clearly, the opportunities for economic activity, with its improvements, will leave Europe for other regions, as will Russia’s energy resources.

This economic auto-da-fe… suicide is, of course, the internal affair of the European countries. But in the meantime, we need to act pragmatically, proceeding primarily from our own economic interests.

Now our partners’ erratic actions – this is what they are – have resulted in a de facto growth in revenue in the Russian oil-and-gas sector in addition to the damage to the European economy. We should certainly bear this in mind; we understand and see it but it should not unbrace our companies.

The changes in the oil market are tectonic and, of course, business is unlikely to follow old patterns. Under these new conditions, it is important not only to produce oil but also to build an entire vertical chain, all the way to the end consumer.

Colleagues, under the circumstances the state will continue doing all it can to create conditions for changing the business models of companies – improve logistics opportunities and ensure transactions in national currencies – I realise there are certain restrictions in this respect, as we have discussed many times, but it is necessary to work for this, and that’s what we will do. We will make loans and insurance services more affordable for oil companies and encourage projects on the advanced processing of raw materials and upgrading domestic oil services technology, including the development of deposits and extraction.

At the April 14 meeting, we reviewed in detail the change in priorities in developing the oil-and-gas industry. We made strategic decisions to protect the long-term interests of the Russian economy.

Understanding what steps the West will take in the near future, we must reach conclusions in advance and be proactive, turning the thoughtless chaotic steps of some of our partners to our advantage for the benefit of our country. Naturally, we should not hope for their endless mistakes. We should simply, practically proceed from current realities, as I said.

In this connection, I would like to discuss a plan for additional measures that will allow us to protect our national interests as much as possible, and strengthen our economic sovereignty, in this case in the fuel-and-energy sector, primarily the oil industry.

Let’s analyse all these issues carefully, look at them and consult with you on what we should do in the near future.