From The Orangutan Project: On Wednesday 9 November members of the Natural Resources Conservation Agency (BKSDA) in East Kalimantan rescued a tiny baby orangutan from East Kutai district in East Kalimantan. They handed the infant over to the Bornean Orangutan Rescue Alliance (BORA) so she could receive urgent medical care in the BORA Rescue and Rehabilitation Centre.

The female Bornean orangutan, who has been named Mabel (which means ‘loveable’), was rescued by local residents after she became separated from her mother. It is believed her mother was shot dead in an oil palm plantation. The incident is currently being investigated by the BKSDA. 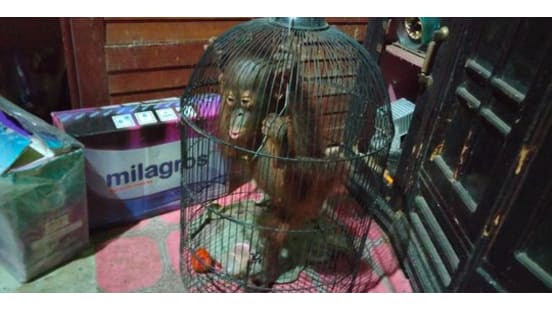 “Human-orangutan conflict is a significant threat to Critically Endangered orangutans, and occurs when their forests are destroyed for unsustainable monocultures and they are forced to leave the jungle to find food,” he said.

The infant was found inside a birdcage, curled up in pain and listless. Mabel was severely malnourished and dehydrated, as the residents who took her from the plantation had only given water and no food. Her stomach was severely bloated due to the lack of food and her breathing was heavy.

Due to her small size, her rescuers had initially assumed Mabel was four months old, but after a medical examination, they estimated she is eleven months old. At this age, she would still have been breastfeeding from her mother.

As soon as she was rescued from the birdcage, the medical team prioritised providing Mabel with a sense of safety and comfort by hugging her and allowing her to listen to their heartbeats.

The team then cleaned her nose so she could breathe more easily and rubbed her bloated stomach with eucalyptus oil to ease her pains. They fed her with ripe papaya to avoid making her bloating worse.

Mabel has been transported to the BORA Rescue and Rehabilitation Centre in East Kalimantan and placed in quarantine. The quarantine period will last for eight weeks and during this time the team will give her regular veterinary checks to ensure she isn’t carrying infectious diseases that could be transmitted to people or other orangutans at the centre.

“Although Mabel’s first few months of life have been traumatic, our orangutan carers will give her the best chance at a good life. Through Jungle School, medical care, love and good food, they’ll help her build the strength and skills to return to the forest one day,” said Leif Cocks.

Orangutan rescues are made possible through supporters providing monthly or one-off donations.

For more information on The Orangutan Project’s rescue, rehabilitation and release work, or to support with a donation, visit: https://www.theorangutanproject.org/donate/rescue-rehabilitate-and-release-orangutans/