It is a vehicle for promoting population driven economic growth throughout regional Australia. Its stated vision includes a "Big Australia" fuelled by immigration.

The Chair is Mal Peters, NSW farmer and former President of the NSW Farmers Federation. Apart from him, included on its 6 person Board are Ian Sinclair, Christian Zahra, and Grahame Morris, all former Coalition political identities.

From its Annual Report it seems its revenue comes from governments - in 2018 it received from them (no details of individual contributors) $2,008,829. Given the pro growth policies of all Australian governments that perhaps isn't surprising. 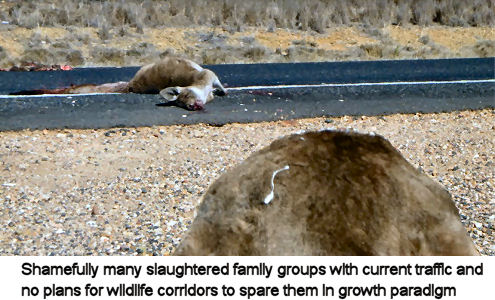 Its all about growth driven economics and jobs.

No mention of environment, particularly water. That's odd, given Mal Peters previous involvement in water issues, being critical of the MDBA and Barnaby Joyce when he was Agriculture and Water Resources Minister (https://www.mdbrc.sa.gov.au/sites/g/files/net3846/f/mdbrc-witness-statement-mal-peters.pdf?v=1534462934). So his chairmanship of a body consciously ignoring the environment is a bit surprising.

And no mention of wildlife or wildlife corridors, despite the fact that the wildlife are not coping with the current rate of traffic and they have no other place to go.