"People end up with nothing because they really don't believe we have a system as bad as we do." Consumers are unprotected in Australia's building disaster. "You may have a house that's being demolished, but you still have a block of land. If you've got any superannuation or anything in the bank, at least hang on to that." Anne Paten of Victorian Building Action Group (VBAG) talks about how the system that's supposed to help building consumers actually bleeds the victims of the industry even more. People qualify for insurance, but never get the money. They go to VCAT and are sent away with nothing. The results are bankruptcy, divorces, and suicides. Substantial reports and inquiries are removed from the internet. Australians need to realise that the government won't help them; they have to join together and help each other.

We have transcribed some highlights from the videoed speech full of extraordinary revelations - made at the Victorian Building Activists Group AGM 2019.

Since 2002 there have been mandated payments for builders in all states to take out domestic building insurance (DBI in Victoria), yet almost no owner who has suffered by bad building has successfully claimed their insurance, despite multiple defects. For instance, in 2011, $88m was paid into the Victorian fund, a year when 40% of building consumers suffered financial loss. [1] Yet, for that same year, only three owners had successful insurance claims against their builders. Yet many, many more qualify. The money goes to salaries in administrative infrastructure for the funds. Recently it was reported that owners who suffered in the 2011 Lacrosse dangerous cladding fire disaster had a 'big' win of $7.5m at VCAT. This sum does not even cover the amount paid to get people out of the building on the day of the fire. Owners have borrowed far more than that just to go to court. And the builder was not even held responsible. They system protected him.

At 10 minutes into the video:

"In 2012, the Victorian Omsbudsman found [2] that the [Victorian] Building Commission, instead of being a 'regulator'[...] was taking the big building companies out to dinner, to the best restaurants, with the best bottles of wine then getting them tickets for the tennis centre, for the football, and so on, and giving the money to the HIA, the MBA. [...] the money that runs all of those organisations is from building permits [...] so, in other words, all of us [victims of this system]. [...]"

"[The Victorian Building Commission, VBA] uncovered the registration system. Effectively the registration system is, if you cannot speak English, cannot read plans, cannot write a sentence, know nothing about building, and have never seen a hammer, you would make an excellent builder. So get registered. The book, the Game of Mates, calls it the 'favour system'. It's not like you go to the doctor, the teacher, the school: These people have no qualifications. And, of course, they don't build! So, we have builders who don't build, we have surveyors who don't survey, and we have regulators who don't regulate. So, in a sense, that's it. That's all we have to really understand.

So, by 2015, they had changed the name of the [Victorian] Building Commission. They had removed everything from its 20 year history from the web."

"This report identifies problems in the governance and administration of the Victorian Building Commission and the manner in which it expends monies generated from its regulation.

"In March 2012 the Ombudsman's Office received information from several sources in relation to concerns about the Victorian Building Commission (the Commission). These concerns included that the Commission:

During the investigation additional issues were identified. These included significant expenditure by Commission staff on hospitality and entertainment and concerns about the administration and integrity of the registration system for building practitioners."

Source https://apo.org.au/node/32338. The link from this source to a pdf at the Auditor General's office results in a "Page not found" at the Auditor General's site. Here is the link, try for yourself: https://www.ombudsman.vic.gov.au/resources/documents/Investigation_into_the_governance_and_administration_of_the_Victorian_Building_Commission.pdf.

VBAG is the only organization representing building consumers in Australia. VBAG estimates conservatively that for 2019 more than one million Australians will lose more than $400b on shonky building, as well as suffering decades long distress from disputes, leading to deaths, suicides, shattered families, and ruined lives. Come along and inform yourselves and participate.

VBAG AGM is on 26 August 2019 at 7pm at 1 Wendell Street, Brunswick. (Best to enter from Victoria Street.)
Topic: ‘Dream into Nightmare: In the SHOES of Building Consumers’ 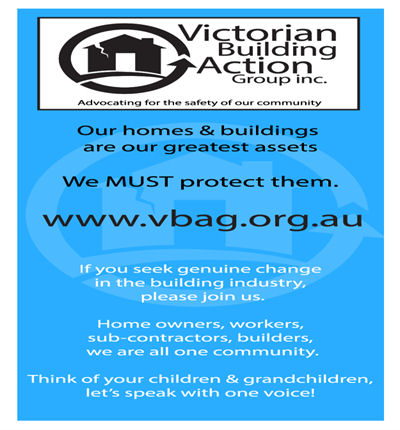 VBAG's conservative estimate for 2019: more than 1 million Australians will lose more than $400 Billion. This without considering the toll of the years or decades’ long distress from disputes, and without taking account of the deaths and suicides, shattered families, the lives forever ruined.

This is the reality of living in the lucky land of Oz! Here we have no - NO - consumer rights, no human rights, no freedom of speech and no 'fair go'!

Please make the effort to come, and bring your family and friends. This corrupted industry does not discriminate. Everyone is a building consumer and all are at high risk. People from all walks of life have and will continue to be ensnared into the wicked web of building fraud - because ‘shelter’ is a basic need delivered for three (3) decades by a lawless ‘industry’!

HELP US with strategies to reclaim our rights as the number ONE stakeholder, to speak as ONE united CONSUMER VOICE and to end this biggest ever man-made human disaster.

Building is more than risky business; it's a killer

As the only registered building consumer organization in the country, we have been working hard on behalf of owners for 13 years, but the powerful vested interests who
control the industry and our politicians have locked us out, rendered us utterly voiceless.

The destruction of the con-struction industry has delivered a massive man-made disaster, a horrific human tragedy. This was preventable, but profits count more than people!
- We supposedly live in a first world country, but our built environment is third world.
- Deregulated in 1993, the 'governance framework' underpinning the industry was con-structed to support a lawless industry and to crush consumer cash-cows.
- The biggest con: Big business directed our governments to steal our rights and to authorize legalized fraud.
- The cowboys have destroyed our families and shamelessly left millions of them broke and broken. This year more than one million owners will lose an estimated $400b. Yes, $400 BILLION!