An article in yesterday's Herald Sun newspaper pointed to a sleight of hand by the North East Link Project in its recent appearance before the North East Link Inquiry and Advisory Committee. (See https://www.heraldsun.com.au/leader/inner-east/golfers-tee-off-at-controversial-proposal-either-reduce-or-alter-freeway-golf-course/news-story/386681c74b5e0151a62c2107f2943f78 - this article is hidden behind a Herald-Sun paywall. - Ed).

Documents tabled as the Committee proceedings were concluding countenanced a substantial reduction in the area of the Freeway Golf Course which is located near the Yarra River in North Balwyn. The president of the two clubs located at the course attacked the Committee process that left them unable to respond to the material. 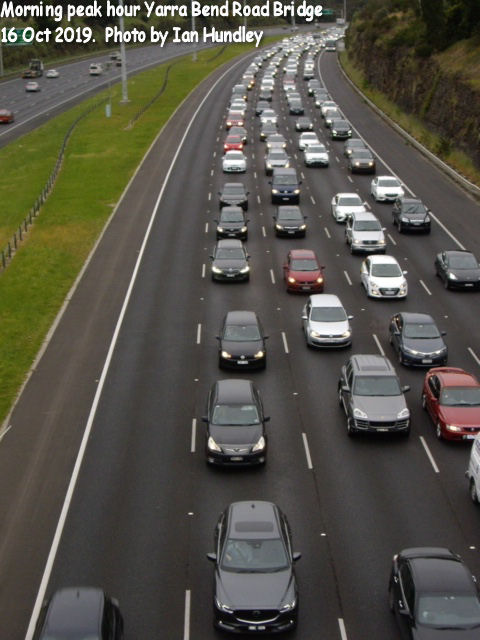 That the Freeway Golf Course should be reduced in size sits nicely with the Victorian government's plan to substantially increase the lanes capacity of the Eastern Freeway, and to build a quite massive "spaghetti junction" to cater for the proposed North East Link. It is a threat always posed by major roads projects, which are inherently space inefficient relative to public transport. The Victorian government is not proposing any enhancement of public transport capacity in the corridor to be served by its proposed North East Link. If the North East Link were to be built it would, like all freeway projects that have preceded it, provide no more than temporary relief from current traffic congestion, and eat into a lot more green open space than the golf course in North Balwyn. The public transport services that do exist in the corridor can be truthfully described as no better than miserably inadequate.

The attached photograph is of the Eastern Freeway taken from the Yarra Bend Road bridge in Fairfield, about 10 days ago in the morning peak travel time. This is a delightful part of the world of extensive parkland except for the fact that it has a freeway bisecting it. If the Andrews government gets its way it will deteriorate markedly. The median strip, shown on the left of the photograph, was assigned to a rail service to Doncaster. The Andrews government now threatens to take it over for additional traffic lanes to cater for the North East Link. The photograph also shows four lanes of bumper to bumper traffic. A single train service can cater for about the same number of commuters as a freeway lane carries in an hour. You will also see that the left hand lane was unoccupied at this point. This is the T2 lane which is provided for vehicles with two or more occupants. Most vehicles driven in Melbourne have just one occupant, the driver.

In the last few days two quite significant things have happened. Melbourne City Council signed off on its new 10 year transport strategy, which proposes to remove on-street car parking in central Melbourne and to provide additional space for pedestrians, and active transport generally, as well as to facilitate public transport. The Grattan Institute has called for the introduction of a congestion tax for central Melbourne. These two initiatives demonstrate that central Melbourne is now full (of cars) and the situation is quite intolerable in social, environmental and economic terms.

The Andrews government is out of time. It is living in the 1960's, when the car was king. Things are different now, and the fight to defeat the North East Link, and for sustainable transport, is a necessary one for the present and the future.