Not so long ago, a giant thermal rain-bearing wind carried moisture inland from giant forests on the eastern coast of Australia. The giant thermal has disappeared along with the rain. Read why.
See also, "Deforestation drys continents - new theory explains how" Also see, at end of article, a short report about DSE from defenders of the forest at Brown Mountain. 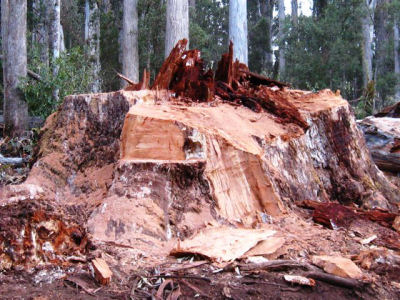 This article was originally published on the Natural Sequence Farming Forum

On the east coast of Australia there used to run forests that were hundreds of feet high in places and travel for miles inland from the coast.

There were houses all along the east coast that were covered in mould, on the east side of the house.

A great thermal existed called the Tanami Wind. This was the exact process that occurred as described in the articles quoted by Sheila about forests creating rain (Deforestation drys continents - new theory explains how). This thermal wind was produced by the great forests along the east coast that drew moist air from the sea sending it thousands of miles inland carrying life-giving rain.

Its the reason that Australians developed the cavity brick wall.

TODAY THIS FOREST NO LONGER EXISTS....The vegetation has all but been removed....which cooled the land and created the thermal wind which was caused by the temperature gradient between the warm sea air and the cooler air over the vegetated landscape.

In Mataranka in the NT the ancient Dreamtime stories of the Mangarayi and Yungman tribes describe a wind sweeping in from the east that created the area.

This short article about a tragic transformation in recent Australian history, was contributed in response to candobetter articles and reports about the role of vegetation, especially forests, in create rain and the relationship between desertification and deforestation.
Author: Duane, Assistant to Peter Andrews, of Natural Sequence Farming.

Editor's note: This process is ongoing and our governments are so plugged into the dead-end of industrial growth and financial rope-tricks that they are unable to stop the insane state of logging. Their actions are so indefensible that they avoid scrutiny by secrecy.

Here is the latest on the Brown Mountain destruction:

Dated 16-9-09: "Yesterday we received a 'NO' from the FOI unit to a request to access the DSE's own Brown Mt wildlife survey report that was sent to the minister. They are still playing politics with our old growth forests. Extra pressure is needed at this critical time." email sheila[AT]candobetter if you want to help.