“Merely adding more people isn’t a sustainable economic strategy. We can’t pretend that high immigration comes without a cost and growth should not impose an unfair burden on those who are already here. Excessively rapid growth puts downward pressure on wages and upward pressure on housing prices, both of which have sorely stung workers and aspiring home-owners in Sydney and other parts of NSW for a decade. When you look at the numbers, it’s no surprise communities in Sydney are feeling the pressure. In 2006, annual net overseas migration to Australia increased to roughly double its pace across the preceding 25 years.” (Dominique Perrottet as Treasurer in 2018)

To the horror of many Australians, Perrottet has recently called for 'explosive immigration' to Australia, purportedly as an economic fix. In this interview we see how shockingly cynical this call really is, in the light of Perrottet's own history.

Dominic Perrottet’s ‘explosive immigration surge’ will be a disaster 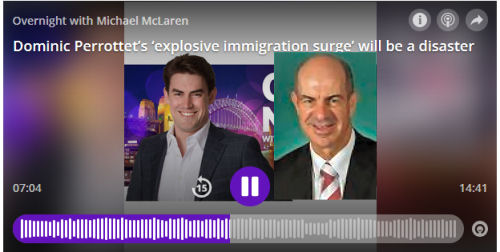 Kelvin Thomson, after quoting Dominique Perrottet above, added, “He told your colleague Michael Mclaren, in an interview in 2018, that simply because the treasury bureaucrats might tell you that putting in more people drives economic growth, that is lazy economics. That’s what he should have told your bureaucrats now, instead of apparently falling hook line and sinker for what he was able to recognize as rubbish three years ago.”

Candobetter Editorial comment: It is obvious that immigration adds pressure on politicians too. Was giving the growth lobby 'explosive immigration' the price Perrottet paid to be NSW Premier, causing him to eat his 2018 words? NSW people and the rest of Australia will also pay for this if it goes ahead.

In the podcast we link to above, Luke Grant is joined by The Hon. Kelvin Thomson, Former Federal Member for Wills & spokesman for the Sustainable Australia Party, who advises that NSW Premier Dominic Perrottet rule out proposals for an “explosive” immigration surge which would bring in 2 million extra migrants over the next five years.

Mr Thomson says, “Not only will 2 million extra people be an environmental disaster, it will be a disaster for young Sydney-siders.”

“For the first time in years the Reserve Bank and leading economists have seen signs of wages growth and increasing job opportunities for young people.”

“The “explosive” two million extra people would detonate those opportunities, blowing the chances of young people to have secure full time jobs right out of the water.”