What kind of incompetent government cannot even keep small creatures like bandicoots from extinction? Wildlife ecologist and forensic animal hair identification expert, Hans Brunner, says politicians and greedy planners have seriously watered down and misinterpreted the meaning of the word 'reserve'. Parks Victoria complain about the lack of money, but spend money on infrastructure for people leaving no money for the protection of plants and animals, or for weeding, predator control and fencing, which should be their first and only priority. 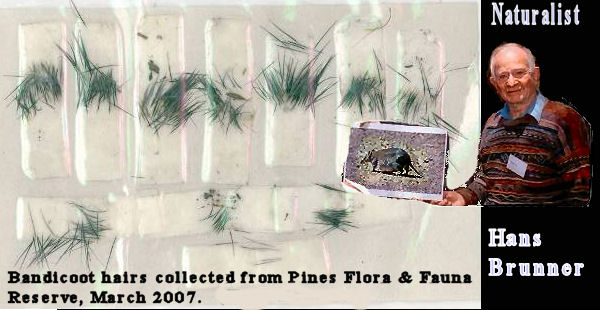 Nature Conservation Reserves are meant to be primarily secured for the protection and enhancement of indigenous plant and animals. These reserves must be strictly only used as a refuge for the plants and animals that have been destroyed everywhere else. Outside these reserves people have taken up over 95% of space available. This includes the many sports grounds, schoolyards, golf courses, botanical gardens, beaches and similar open spaces where people can enjoy open air activities.

Obvious role of Nature Conservation Reserves ignored and exploited for other reasons
Unfortunately, insensitive politicians, greedy planners and most of the selfish public have seriously watered down and misinterpreted the meaning of the word reserve. Why then call them 'reserves'?

It is obvious, when people already occupy 95 % of all the other space that the reserves are there to keep people out from what is clearly reserved for our unique plants and animals.

Offsets do not replace habitat
Whenever Nature Reserves are compromised and mutilated with infra structure, we are even hoodwinked to believe that offsets will replace lost habitat. But offsets are really only as good as criminal money laundering is. They are fake!

Humans do far more damage than the foxes, cats and dogs that get the blame
There is also no argument that in environmental terms, it is not foxes, cats and dogs, but us humans, who are the most serious pest species on earth. So, why are humans always given preference?

Yet humans are always given priority in 'Nature Reserves'
Whenever a master management plan is created for a Nature Reserve, it is always people that get the first consideration. The animals and plants have to suffer the consequences of these unbalanced decisions, which result in ongoing local extinctions, and in serious loss of biodiversity.

Parks Victoria cries poor but spends up big on humans

Parks Victoria is always complaining about the lack of money and we know why. They spend all the money on infra structure to accommodate people and then have no money left for the protection of plants and animals and for weeding, predator control and for fencing, which should be their first and only priority. A Nature Conservation Reserve is very much cheaper and easier to manage when people are mainly kept out of it. It becomes affordable.

...and fails to adequately monitor, mitigate and repair indigenous fauna and flora decline
Why doesn't Parks Victoria make plans to regularly monitor the presence of native plants and animals and to act when there is a decline or possible loss of a species? Have they ever made plans to re-introduce previously lost species?

An area of prime habitat for the Southern Banded Bandicoot

A typical example is the near demolition of the Pines Flora and Fauna Reserve. Only a very short time ago this reserve has been doubled in size to 220 ha in order to protect and enhance the nationally endangered Southern Brown Bandicoot. Now it is going to be bisected by a four line freeway taking away a large area of prime habitat for bandicoots. As if this is not damaging enough, further plans are for a cycling and walking track, as well as lots of other walking tracks and a primary visitor node, involving lots of infra structure and parking space, all for the people at the expense of the plants and animals that are supposed to be protected. In the ex-Dara land, where bandicoots were most prevalent, a large area has also been taken over by a school, surrounded by several ha of open space. And this was not the end. To cap it all, a large housing estate has been placed exactly where bandicoots used to roam. DSE admits that because of all this habitat loss and disturbance caused, the Southern Brown Bandicoot may become lost in the Pines, but nothing is done to stop it.

And now the miserable history of the bandicoots.

When the Dara land was occupied by the Dept. of Agriculture and Vegetable Research, hundreds of bandicoots lived in the unused heath land. They were incidentally protected by regular poisoning programs of foxes and rabbits which did damage to the vegetables. In 1970’s, I (Hans Brunner) carried out a bait acceptance trial on bandicoots in the Dara land where I trapped twelve bandicoots. In the 1980’s I collected 18 bandicoots for the La Trobe University within two trap nights. They were still plentiful then.

Again in the Dara land, in 1997 Sally Kimber studied the bandicoots near whereI had earlier carried out the bait acceptance trial. Sally's supervisor was Peter Brown from Deakin University. I was also involved and inspected the trap lanes with Sally and Peter to examine the trapped bandicoots. In 1999, the Pines population of bandicoots were described again to be the largest on the Peninsula, ( Taylor ).

In 2005, about two years after the Dept. of Agriculture left the Dara land, a number of people including Dr.Terry Coats and I inspected the whole of the Dara land for the presence of bandicoots. No signs of bandicoots were found. The land has been opened to the public by installing gates to allow people with their dogs to roam freely throughout, what should have been a reserve for bandicoots.

Parks Victoria was now in charge and I blame them totally for the loss of these bandicoots. Fox control has stopped and rabbits have increased in numbers, all to the detriment of the bandicoots.

Shortly after Sally's study, her study area was burned for fire reduction without consulting ecologists to assess the possible danger to bandicoots. To rub salt into the wound, another, huge area of bandicoot habitat was also burned just next to it, long before any remaining bandicoots would have been able to have recolonise the previously burned area.

What else could be expected from Parks Victoria?

And now, the plans are to construct a “ Primary Visitor Node”, again just for the people, in the same Dara land with more visitor tracks that will meander throughout prime bandicoot habitat. Another part will be occupied by a cycle trail. Who knows what else will be added for human use at the expense of natural habitat?

This 'primary visitor node' must never be built anywhere within a reserve. Instead, this money should be spent on fox and rabbit control and on fencing.

Coming back to my opening remarks about the purpose of Nature Conservation Reserves, it is imperative that the whole of the Dara land (half of the total the Pines Flora and Fauna Reserve), be locked up and used for the urgent recovery of the nationally endangered bandicoots and all the other iconic native plant and animals that will benefit.

In the absence of people and dogs it will then allow for the unhindered control of foxes and rabbits. The area is already fenced with a type of fence that allowed bandicoots to flourish as they did when this area was managed by the Dept. of Agriculture.

There can be no more excuses! The other half of the Pines should also be used only for very passive recreation such as walking but without dogs!!

The four lane bypass and the cycle trail will always remain a shameful monstrosity which causes enormous damage, not only to the Pines, but the whole region.