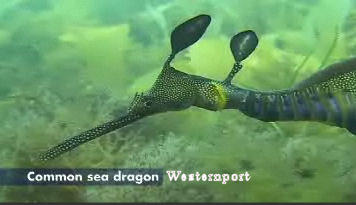 There seems to be a big focus on Westernport at the moment, as population growth, climate change and further industrialisation threatens to further harm its fragile ecology.

Ordinary people are worried about social and environmental impact

There has been a shift in attitude amongst ordinary people who are becoming increasingly aware of the importance of protecting our environment. The Global Financial Crisis, water shortage crisis, climate change and predicted population expansion have incited an awakening about how fragile our society is, and how dependent we are on the health of our environment and the role we all play in it. 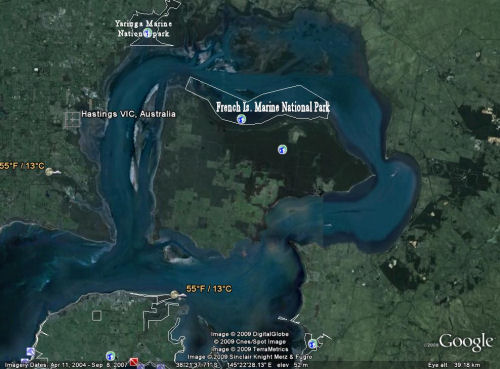 Last week, SVCAG Vice President Gillian Collins and I attended the launch of The Western Port Seagrass Partnership's DVD about the loss of seagrass in Westernport and the efforts of WPSP and others to address this problem. We urge you to visit their website www.seagrass.com.au and click on the link to receive a free DVD, then spread the word to others. Raising awareness about the importance of a healthy Westernport is crucial to addressing the problems facing it.

On the 11-12th May, I attended the Victorian Transport Infrastructure Conference, representing various groups and individuals across Victoria. What amazed me was that although all roads lead to Hastings, as you can see from the q & a's asked at the conference, there are many questions still left unanswered. Interestingly, the speaker from Asciano (who own the interstate rail and the Port of Geelong) completely got it when I spoke with her about a National Transport Strategy which would allow for the utilisation of other existing container ports. We will follow up on that conversation shortly.

Recently, we had Ralph Kenyon CEO of the Port of Hastings Corporation attend our committee meeting to discuss where the PoHLUTS [Port of Hastings Land Use and Transport Strategy (Consultation Draft)] stands now. (To our disappointment, they've taken the 'oH' out of it so now it's just 'PLUTS' - maybe they didn't think it was quite as funny as we did, that spell-check wanted to make it 'Pollutes'.)

Anyway, Mr. Kenyon informed us that the Port Futures document would be out in a few months which would outline the grand plan for Victoria's ports, and contain details in response to the original PoHLUTS. Keep an eye on www.portofhastings.vic.gov.au .

Why the Refusal to include SVCAG in PoHC "Community Reference Group"?

We have also requested several times that SVCAG be included on the Port of Hastings Corp Community Reference Group so that we may better inform you, our supporters, but Mr Kenyon refuses our request on the basis that 'this is the group we began with, so we'll keep it that way until we review it later when the next stage of the port strategy document is released.'

I'm sure if Mr Kenyon or the Chairperson of the CRG said to the other members of the group 'considering SVCAG have been heavily involved within the community helping us to raise awareness regarding the PoHLUTS, would it be OK that they join the group, particularly considering the professional manner they have maintained, and valid points they have raised?' I couldn't imagine anyone would refuse - would you?

In the meantime, the PoHC have been unsuccessful in their attempts to acquire funds from both state and federal governments to begin Stage 1 of their EES. After attending the Vic Transport Plan Conference, I'm not convinced that anyone has any money to do anything, let alone develop yet another port for container imports, especially when they haven't even finished dredging Port Phillip! 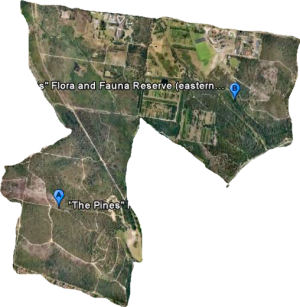 Frankston bypass cuts and damages wildife corridor via The Pines

The Frankston Bypass, a key transport route for the Port of Hastings development as outlined in the PohLUTS, did not get complete funding in this year's State budget either, and got nothing from Infrastructure Australia. Mr Brumby is still talking as though it will go ahead, and there are surveys being conducted along the route. Gillian Collins, who has been working tirelessly to protect the Pines Flora and Fauna Reserve, along with local activists, has been visiting Federal and State politicians, Environment Victoria and Green Wedges Coalition representatives, and urges all of you to contact Federal Environment Minister, Peter Garrett and raise your concerns about the unnecessary construction when traffic congestion alternatives exist. There will be destruction of endangered habitat, and endangered species will be threatened if this freeway proceeds.

Again, the lack of funding gives us a bit of a reprieve and allows more time for people to connect the dots, and raise further awareness of the importance of protecting Westernport.